Visit NAP.edu/10766 to get more information about this book, to buy it in print, or to download it as a free PDF.
Page i Share Cite
Suggested Citation:"Front Matter." National Research Council. 1981. Alcohol and Public Policy: Beyond the Shadow of Prohibition. Washington, DC: The National Academies Press. doi: 10.17226/114.
×

Preface The Panel on Alternative Policies Affecting the Prevention of Alcohol Abuse and Alcoholism was charged by its sponsor, the National Institute on Alcohol Abuse and Alcoholism (NIAAA), to produce a systematic analysis of alternative policies affecting the prevention of alcohol abuse and alcoholism. Prevention is not, of course, a new idea in the alcohol field. It has turned up with increasing frequency in recent years as an attractive way to think about an intractable issue. There are a number of recent reports from committees, both domestic (Plaut 1967, Wilkinson 1970, Joint Committee of the States 1973, Medicine in the Public Interest 1979) and international (Bruun et al. 1975, World Health Organization 1980), in which prevention ideas have had a prominent place. A chapter on prevention was included in each of the last three official reports to Congress on alcohol and health (National Institute on Alcohol Abuse and Alcoholism 1974, 1978, 1981~. Despite all this attention it seemed to us- and to those at the NIAAA and on the Committee on Substance Abuse and Habitual Behavior who chartered our project that the concept of prevention policies had not been systematically developed. The particular kinds of interventions, the nature of the arguments that could be made, and the assessment of existing evidence on the effectiveness of various instruments could all profit from sustained consideration. The panel was assembled, com- prising experts in the study of alcohol problems prevention methods used in other fields and other relevant academic disciplines to lend structure and content to this inquiry. Our concerns were not entirely abstract or academics however. In formulating ideas about prevention v

V1 Preface policies, we sought to ground our thinking in the existing historical and institutional context. In view of the expansive territory of policies affecting prevention, we could hardly expect to cover intensively every possible track within it. We have therefore taken the role of scientific survey party: systemati- cally noting the lay of the land; describing the prominent features; ex- amining closely and marking for further attention conformations that seemed especially interesting and accessible. We have had to invent some of our survey equipment along the way. In particular, our typology of policies for modifying alcohol's effects did not come to us ready-made but was crafted over the course of writing, intensive discussion, and rewriting. The result, we hope, strikes a useful balance of the mandates to be systematic, analytical, disciplined and crisp. We have had considerable help in writing this report from seven studies commissioned by the panel, discussed at length during our de- liberations, revised by the authors, and published in this volume. Two of these studies were written to help get us under way by concisely summarizing the relevant historical and scientific background. The first of these, by Paul Aaron and David Musto, is an overview of drinking in U.S. political and cultural history, beginning with colonial times and concluding with some speculations about the possible impact of current social movements on drinking policies and practices. This paper was an important element in building the perspective of the first, historical chapter of this report and especially in tempering our understanding of the Prohibition experience. In the second paper, Dean Gerstein de- scribes the principal methodological and conceptual controversies that surround the measurement and evaluation of alcohol use and its con- sequences, including the interaction of drinking with a variety of envi- ronments: biological, physical, and social. This paper was a starting point in the development of our second chapter, on the structure of the alcohol problem. Dan Beauchamp's analysis of the closely studied 1969 Alcohol Act in Finland provides a general perspective on the strategic limits to al- cohol-related policy choices available to democratic governments. This analysis points toward the concerns involved in the transition from def- inition of the problem to specific policy proposals. In this sense, Beau- champ's work speaks to our third chapter, regarding perspectives on . . current po lcles. The papers written by Philip Cook, John Hochheimer, and David Reed address the efficacy of several of the better-known policy instru- ments that might be (and have been) used to prevent alcohol problems. Cook focuses on the effects of controlling alcoholic beverage market prices by taxation. Hochheimer analyzes the use of educational media

Preface . . V11 and personnel (and the educational use of media and personnel) to reduce alcohol abuse. Reed discusses the use of deterrence, education, risk reduction, and mixed strategies for handling drinking-driving prob- lems. Finally, James Mosher and Joseph Mottl examine the surprisingly extensive roles of government agencies not specifically concerned with alcohol in affecting drinking behavior and consequences. These four papers were quite instrumental in developing the analyses of specific policy alternatives in chapters 4 through 6. In short, the commissioned papers, with their more extensive consid- eration of many of the points covered in our report, have enabled the report to be written more efficiently and with a broader understanding than might otherwise have been possible. While the panel does not necessarily concur in every detail of what the supporting papers have to say, we are pleased to include them, to indicate points of concurrence in the text of the report, and to encourage readers to turn to these studies for further insight into the specific areas covered. We are grateful to the many other people who have contributed to this venture. The participants in the panel's Workshop on Alcohol Pol- icies held May 15-17, 198~Kettil Bruun, Daniel Horn, H. Laurence Ross, Gerald Wilde, Joseph Gusfield, Klaus Makela, Phil Davies, and Irmgard Vogt helped to inform and shape the panel's report. Individ- ual reviewers read and constructively criticized drafts of the report. The library and administrative offices of the National Academy of Sciences provided needed assistance. In the Assembly of Behavioral and Social Sciences, David Goslin? executive director, and Eugenia Grohman, as- sociate director for reports, gave expert guidance; Christine McShane, editor, and Elaine McGarraugh, editorial assistant, polished the report and papers and prepared the volume for publication. And at NIAAA, the project management staff? especially David Promisel, provided sup- port and encouragement. This project has benefited from start to finish from the good judgment and dedication of the staff of the Committee on Substance Abuse and Habitual Behavior: Marie Clark' administrative secretary; Beverly Blakey and Charlotte Simpson, secretaries; Deborah Maloff, research associate; and the committee's study director? Peter Levison. It only remains for me to acknowledge the hard, essential work of the panel itself, and of the study director and coeditor of this volume, Dean Gerstein. MARK H. MOORE. Chair Panel on Alternative Policies Affecting the Prevention of Alcohol Abuse and Alcoholism

F. 1gures 1. Schematic View of the Relationship Between Drinking and Consequences of Alcohol 2. Important Effects of Drinking and Policies for Dealing With Drinking 3. Relationship Between Average Daily Consumption and "Drunk Days" in a Sample of Air Force Men 4. Time Trends of U.S. Consumption of Absolute Alcohol, Cirrhosis Death Rate, and Alcoholism Death Rate in the Drinking Age Population, 183~1977 5. Reported Drinking Status of Men and Women in College and 25 Years Later 6. Schematic View of the Causal System Underlying Alcohol Problems . . . x~ 18 22 31 35 39 46

Next: Report of the Panel: Introduction »
Alcohol and Public Policy: Beyond the Shadow of Prohibition Get This Book
× 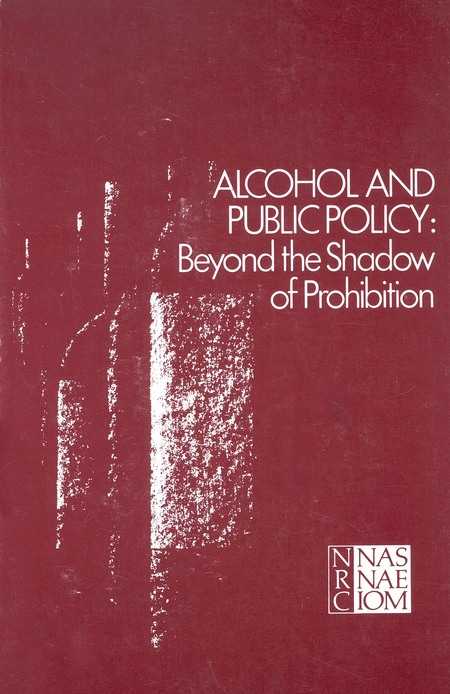