Visit NAP.edu/10766 to get more information about this book, to buy it in print, or to download it as a free PDF.
Page 1 Share Cite
Suggested Citation:"Sample Chapter 1: Visiting An Old Friend." Jordan D. Brown. 2006. Robo World: The Story of Robot Designer Cynthia Breazeal. Washington, DC: Joseph Henry Press. doi: 10.17226/11552.
×

Introduction Creature Creator When you hear the word "robot," you might think of futuristic machines that battle each other in the movies or furry toy pets that answer commands. But there's another exciting world where robots do more than entertain. Cynthia Breazeal lives and thrives in that world. She is a roboticist, a scientist who designs, programs, and experiments with robots. Cynthia's mission is to build innovative robots that can work and learn in cooperation with people--but not as servants or tools. She wants robots to make our lives better through their abilities, social skills, and even "personalities." By creating life- like machines, Cynthia is also making interesting discoveries about our own human behavior. Cynthia has applied her engineering and computer programming skills to incredible robotics projects: Attila, Hannibal, Cog, Kismet, and Leonardo are known throughout the world. They are also examples of Cynthia's strong creative talent that allows her to combine art and science in groundbreaking ways. To many, this makes her a visionary--a person who can imagine things that don't yet exist. How did Cynthia become a world-famous roboticist? What challenges did she face along the way? As you read her story, you'll soon see how Cynthia's curiosity, creativity, and competitive spirit helped her achieve her dreams. ix

It was a time when herrobot pal seemed almost alive.

1 VISITING AN OLD FRIEND S ince April 2003, a cartoonish-looking robot named Kismet has been one of the star attractions of an exhibit entitled "Robots and Beyond: Exploring Artificial Intelligence." Most people who view this display at the Massachusetts Institute Cynthia Breazeal of Technology (MIT) are amazed and awed by the idea of a shows her silly side "lifelike" robot. They are also impressed by the videos of Kismet at MIT in May 2000 (above). Hours in action. But one visitor looks at Kismet in a very different way. before, she had Cynthia Breazeal feels an odd mix of pride, melancholy, and defended her thesis nostalgia when she stops by the exhibit. Why? Kismet was one of research about a robot named the robots Cynthia created as a graduate student at MIT. And Kismet (opposite). although she is thrilled and honored that Kismet is such an important part of the exhibit, a wistful feeling hits Cynthia when she realizes that, in many ways, Kismet is no more. All that remains of Kismet is its head and neck. (Okay, it never actually had a body.) Kismet's brilliant "brain" is gone. That's because the 15 networked computers that once ran the robot's motors, sensors, and programs belong to MIT's Computer Science and Artificial Intelligence Lab (CSAIL). Other graduate students have commandeered these computers to run software for their own robot projects. As a result, Kismet is no longer an active robot. 1

The MIT Museum visitors who stare at Kismet's motionless face might wonder why the Guinness Book of World Records named it the WORLD "World's Most Emotionally Responsive Robot." But Cynthia Breazeal In April 2003, knows why. She remembers Kismet's glory days--when those big schoolchildren visited the MIT blue eyes, fuzzy eyebrows, and red rubbery lips reacted to the ROBO Museum in honor sound of her voice. It was a time when her robot pal seemed of the addition of almost alive. Kismet's head to the museum's Back in 2000, when Kismet lived in Cynthia's workspace on collection. the ninth floor of the AI Lab, meeting the robot face to face was a completely different experience. Cynthia and her team spent years designing Kismet so that it could notice and respond to human social cues. If you had met Kismet then, you probably would have been astonished. In those days, Kismet seemed to know what people were saying. For example, if you walked into the lab and casually asked, "Hey, what's up, Kiz?" the robot would crane its neck in your direction. As you moved closer, its big blue eyes would make eye contact with you and follow your movements. If you said in a sweet, singsong voice, "You are such an adorable robot!" Kismet's face would move closer and smile. But if you scolded Kismet with a stern "Bad robot!" Kismet would pull back in fear. Of course Kismet could not actually understand English--or any other language, for that matter. Thanks to Cynthia's innovative programming, however, Kismet was able to use pitch and tone to recognize the emotional quality in peoples' voices and respond accordingly. The robot's face could express a variety of "emotions," including happiness, sadness, anger, surprise, disgust, and even exhaustion. Because Kismet was so expressive, it was sometimes hard to remember that the robot couldn't actually "feel" anything the way humans and animals do. But that was a sign that Cynthia's project 2

was a success. Cynthia was trying to create a robot that could imitate the emotional behavior of a human infant. Her mission was to build a mechanical creature that could use its facial expressions and babbling voice to communicate with humans in a spontaneous, lifelike manner. The people who met Kismet were often astounded that Cynthia had achieved this ambitious goal. At times, the accomplishment amazed Cynthia herself. But the idea of making a robot had been simmer- ing in her head for decades. Back in 1977, when Cynthia was ten years old, she watched a When Cynthia saw thrilling new movie. It was the original Star Wars. Like so many the original Star Wars, she fell in love with other kids, Cynthia was fascinated by the movie's robot heroes, the human-like R2-D2 and C-3PO. Cynthia daydreamed that one day she would qualities displayed by create a robot as charming, engaging, and R2-D2 (left), a spunky, resourceful robot. intelligent as those two `droids. Cynthia (above) chats Little did Cynthia know that her with Kismet, as it daydream would start to become responds to the social cues coming from her reality within just a dozen years. voice and movement. The word "kismet" comes from the Turkish word for "fate." After seeing the lovable robots in Star Wars, was Cynthia destined to become a visionary robotic scientist? Who knows? But one thing is for sure: Cynthia's boundless curiosity, bold determination, and love of adventure have kept her on an exciting path of discovery from the very beginning. VISITING AN OLD FRIEND 3

Robo World: The Story of Robot Designer Cynthia Breazeal Get This Book
× 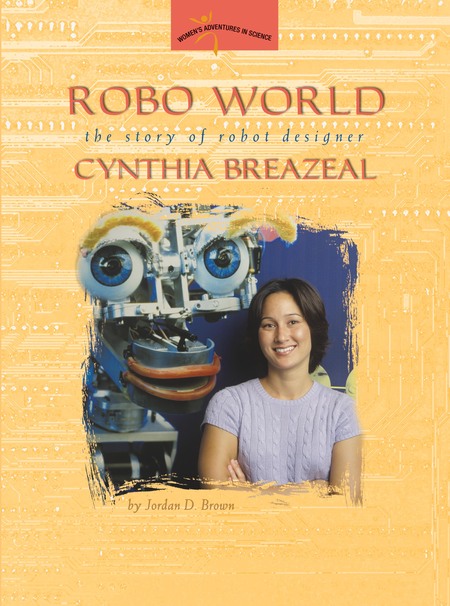 Cynthia Breazeal is a creature creator. Armed with electronic gadgets, software programs, and her endless imagination, she creates lifelike machines that can respond to the world around them. Cynthia Breazeal is a roboticist, a scientist who designs, builds, and experiments with robots. As a child, she relied on movies to see robots in action. Now robots are part of her daily life at the MIT Media Lab. There, she and her students use their computer science and engineering skills to work on marvels like Leonardo, a robot that interacts with people in ways that seem almost human. Cynthia's other world-famous projects include Kismet, an emotionally intelligent robot that smiles, frowns, and babbles like a baby. Why create robots like these? Cynthia can picture a future where sociable robots exist to benefit people. She works hard every day to turn that dream into a reality. Firsthand accounts from Cynthia and from those who know her best combine to tell the inspiring story of a curious, sports-loving girl who went on to become a worldclass roboticist. Robo World is also a Captivating story of high-tech invention where the stuff of science fiction becomes real in today's labs.