Get This Book
Visit NAP.edu/10766 to get more information about this book, to buy it in print, or to download it as a free PDF.
Page i Share Cite
Suggested Citation:"Front Matter." National Academy of Engineering. 2006. Engineering Studies at Tribal Colleges and Universities. Washington, DC: The National Academies Press. doi: 10.17226/11582.
×

This is a report of work supported by Contract WES04-24378-1230-56300 between Salish Kootenai College (supported by National Security Agency Grant #H98230-04-1-0099) and the National Academy of Engineering. Any opinions, findings, conclusions, or recommendations expressed in this publication are those of the authors and do not necessary reflect the view of the organizations or agencies that provided support for the project.

A limited number of copies are available from:

STEERING COMMITTEE ON ENGINEERING STUDIES AT THE TRIBAL COLLEGES

This report has been reviewed by individuals chosen for their diverse perspectives and expertise, in accordance with procedures approved by the National Academy of Engineering (NAE). The purpose of this independent review is to provide candid and critical comments that will assist the authors and the NAE in making the published report as sound as possible and to ensure that the report meets institutional standards for objectivity, evidence, and responsiveness to the study charge. The review comments and draft manuscript remain confidential to protect the integrity of the deliberative process. We wish to thank the following individuals for their participation in the review of this report:

Although the reviewers listed above provided many constructive comments and suggestions, they were not asked to endorse the conclusions or recommendations nor did they see the final draft of the report before its release. The review of this report was overseen by Lance Davis, NAE Executive Officer. He, appointed by the NAE, was responsible for making certain that an independent examination of this report was carried out in accordance with institutional procedures and that all review comments were carefully considered. Responsibility for the final content of this report rests entirely with the authoring committee and the institution.

Next: 1 Statement of Work »
Engineering Studies at Tribal Colleges and Universities Get This Book
× 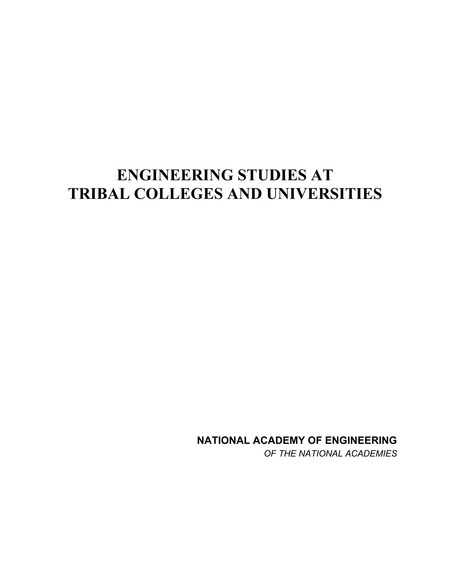