Status of Pollinators in North America (2007)

Get This Book
Visit NAP.edu/10766 to get more information about this book, to buy it in print, or to download it as a free PDF.
« Previous: 7 Findings and Recommendations
Page 208 Share Cite
Suggested Citation:"Glossary." National Research Council. 2007. Status of Pollinators in North America. Washington, DC: The National Academies Press. doi: 10.17226/11761.
×

Africanized honey bee Apis mellifera scutellata, originally from central and south Africa, taken to Brazil in 1957, migrated northward through South and Central America, finally to the southern regions of the United States. Noted for defending nests vigorously and for throwing off swarms any time of the year.

Anther Pollen-bearing portion of a stamen.

Autogamy The quality of self-fertility and self-pollinating in plants.

Bee hive The physical construct for honey bees: a hollow tree, a Langstroth hive, a woven straw skep, or any other container of the right volume and physical properties.

Brood The eggs, larvae, and pupae within a honey bee or bumble bee colony. Immature honey bees live in the central portion of older darkened combs; pollen and honey are stored at the periphery of the brood area.

Bulbil Asexual bulb-shaped reproductive unit of agaves and other plants. Bulbils are produced on flowering stalks if pollinators fail to visit flowers; they are not produced by fertilization. Seeds are not produced and before the death of the semelparous plant, clonal, tiny agaves grow from the unfertilized flowers.

Bumble bee Bee of the genus Bombus, widely distributed throughout North America and some other continents. Bumble bees are social and have annual colonies; some species are managed commercially for greenhouse pollination, especially of tomatoes.

Buzz pollination The process by which a pollinator—usually bumble bee or a solitary bee, but not a honey bee—attaches itself to a flower and vibrates its flight muscles. The pollinator’s movement causes pollen to be dislodged from the anther.

Colony Social insects including honey bees organized by caste (sterile female workers, male drones, a queen mother). The bee colony has been labeled a superorganism, and it can have as many as 60,000 individuals at its peak. The colony lives in a hive or nest. Bumble bee colonies are annual and much smaller (fewer than 30 bees at high altitudes) than are honey bee colonies.

Cross-pollination Pollination by pollen from another plant.

Dioecia The condition of plants with staminate and pistillate flowers borne on separate individuals.

Drone A male honey bee that does not forage for itself at flowers, but is fed by its sisters. Haplodiploid genetic sex determination in bees, ants, and wasps results in males having one set of chromosomes. Drones are haploid; their sisters have two sets of chromosomes and are diploid. Drone bees develop from unfertilized eggs.

Event selection Selection for successful genetic transformation of a plant (for example, corn) with a genetically engineered sequence.

Floret A small flower in the composite (Asteraceae) inflorescence or the spike of a grass.

Founder effect Genetic drift that results from the founding of a population by a small number of individuals.

Fruit set Formation of fruit as a result of pollination and fertilization.

Geitonogamy Pollination by pollen from another flower on the same plant.

Hemizygosity The state of having unpaired genes in an otherwise diploid cell.

Hermaphrodite An organism that has male and female reproductive organs, for example, plants with perfect flowers.

Heterozygosity The state of possessing different alleles of the same gene.

Hive The location (the tree, Langstroth hive box, or similar cavity) of a honey bee colony. Also called the nest or nest box.

Homozygosity The state of possessing two identical alleles of the same gene.

Inbreeding The breeding of closely related plants or animals; in plants, it occurs generally by repeated self-pollination (Raven et al., 2005).

Leafcutter bee Bee in the family Megachilidae that cuts rounded pieces from leaves and flowers to line its nest.

Migratory beekeepers Beekeepers who take their hives from one place to another. They exploit ephemeral blooms to make specialty honey or to provide pollination service.

Monoecious Staminate and pistillate flowers borne on the same plant.

Nectar The sugary often complex watery mixture produced by secretory glands within flowers and from extrafloral nectaries. The high-energy sugar fuel sought by bees and other pollinators, which typically also contains amino acids. A floral reward exchanged for pollination services.

Nectar robbing Extraction of nectar through a hole pierced in the corolla, a practice of some short-tongued bumble bees and carpenter bees that allows them to extract nectar from long-tubed flowers.

Nosema A bee disease caused by a protozoan (Nosema apis). Nosema bombi is a disease of bumble bees.

Ovule A structure in seed plants containing the female gametophyte with an egg cell; when fertilized and mature, an ovule becomes a seed.

Package bees A 2–3-lb aggregation of bees supplied by a breeder. Packages are used to start new colonies.

Parthenocarpy Fruit production in flowering plants without pollination. Parthenocarpy can be induced by plant hormones or genetic modification.

Perfect flower A flower that contains both male and female reproductive parts.

Pistil Female reproductive organ of a flower that consists of a stigma, style, and ovary.

Pollen The male sex cells of flowering plants (angiosperms) that are found within the microscopic tough-shelled pollen grains. Pollen must be moved from flower to flower for fertilization. The sex cells travel down pollen tubes that grow through the floral style and fertilize the ovules. Seeds develop within the ovary and the fruit forms. Pollen grains also are the indispensable protein and lipid-rich food of bees and many other pollinators.

Pollination The transfer of pollen grains from flower to flower and usually plant to plant by wind, water, or animals.

Queen bee The mother of the bees in a nest; usually a single queen inhabits a mature bee colony. The queen can lay 1,500 or more eggs per day during her lifespan of 2–3 years. If a queen dies, the colony can produce a new queen from a diploid worker egg.

Self-compatibility The condition that allows a plant to accept fertilization by its own pollen.

Self-incompatibility The condition that prevents a plant from accepting fertilization by its own pollen.

Split or divide Beekeepers can divide or split half of the adults, brood, and honey combs from a populous mother colony into two Langstroth hive boxes. A new queen is supplied to the daughter colony, or the bees are allowed to be queenless for a time and to raise a new queen from an egg laid by the old queen.

Stamen Male reproductive organ of a flower that typically includes a filament bearing an anther.

Stigma Region of a carpel (female productive organ of a flower) that serves as a receptive surface for pollen grains and on which they germinate.

Tracheal mite Acarapis woodi, parasite of honey bees, accidentally introduced into the United States that has caused colony mortality in many locations.

Varroa mite Varroa jacobsoni, a parasite, accidentally introduced from Asia that became established in the United States. It continues to cause heavy mortality of bee colonies in some regions. The mite feeds externally on bee larvae and pupae within the brood combs.

Worker One of the thousands of sterile daughters of the queen. Worker ovaries usually are undeveloped. Workers typically work inside and then outside the nest as foragers, living for only 4–6 weeks during the spring and summer months. Bumble bee queens also produce workers, but many fewer than honey bees.

Xenogamy Cross-pollination and cross-fertilization of plants.

Next: References »
Status of Pollinators in North America Get This Book
× 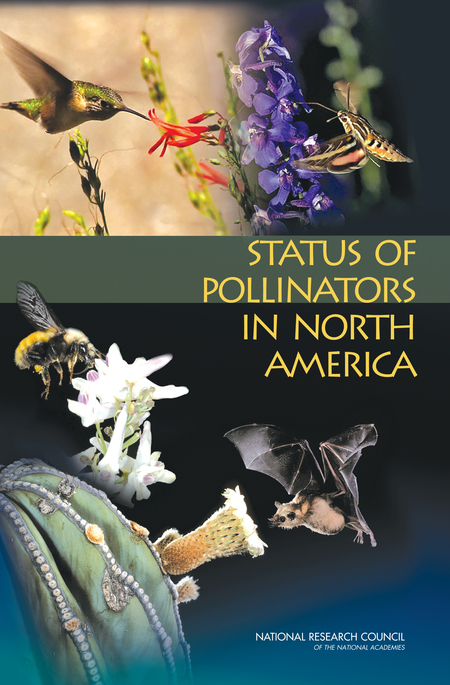 Pollinators--insects, birds, bats, and other animals that carry pollen from the male to the female parts of flowers for plant reproduction--are an essential part of natural and agricultural ecosystems throughout North America. For example, most fruit, vegetable, and seed crops and some crops that provide fiber, drugs, and fuel depend on animals for pollination.

This report provides evidence for the decline of some pollinator species in North America, including America's most important managed pollinator, the honey bee, as well as some butterflies, bats, and hummingbirds. For most managed and wild pollinator species, however, population trends have not been assessed because populations have not been monitored over time. In addition, for wild species with demonstrated declines, it is often difficult to determine the causes or consequences of their decline. This report outlines priorities for research and monitoring that are needed to improve information on the status of pollinators and establishes a framework for conservation and restoration of pollinator species and communities.