Get This Book
Visit NAP.edu/10766 to get more information about this book, to buy it in print, or to download it as a free PDF.
« Previous: 18 Yambean
Page 345 Share Cite
Suggested Citation:"Biographical Sketches of Panel Members." National Research Council. 2006. Lost Crops of Africa: Volume II: Vegetables. Washington, DC: The National Academies Press. doi: 10.17226/11763.
×

Dr. Norman Borlaug, Chair, is Senior Consultant to the Director General of CIMMYT (International Maize and Wheat Improvement Center), as well as Distinguished Professor of International Agriculture at Texas A&M University, and President, Sasakawa Africa Association. A Member of NAS (1968), Nobel Peace Laureate, and Founder of The World Food Prize, he is the recipient of nearly 60 honorary degrees. Dr. Borlaug's early work in plant pathology, wheat breeding, and agronomic systems has since led him to become one of the best-known spokespersons and ambassadors for tropical agriculture and food security. He has been particularly influential at engaging political leadership to integrate agricultural policy into national planning. Dr. Borlaug has had a broad impact on global agricultural research and production, has helped train a generation of agricultural scientists, and remains deeply involved in enhancing African agriculture through the Sasakawa Africa Association and its Global 2000 Partnership with the Carter Center, whose mission is raising the productivity of African farmers through sustainable development and equitable and responsible use of resources. Borlaug is from the U.S., and has a doctorate in plant pathology from the University of Minnesota.

Dr. Anthony Cunningham, Director of Ethnoecology Services in Fremantle, works predominantly with the WWF/UNESCO/Kew "People and Plants Initiative", which he helped found and for which he worked as African Regional Coordinator from 1992 through 2000; he is also engaged by the Centre for International Forestry Research. An ethnoecologist whose work focuses on the applied ecology of natural-resource use by people, his early research was on traditional foods in southern Africa. He has since worked across the continent (and elsewhere) investigating the interactions of humans with their environment by examining, especially, field management of useful plants. With his focus on the relationships among agriculture, resource exploitation, and conservation, much of his research has been tied to

implementation processes promoting collaborative resource management programs between local communities and outside influences such as government, NGOs, and conservation or commercial interests. Among other awards, he has received the occasional Sir Peter Scott Award for Conservation Merit from the IUCN Species Survival Commission (1999), and the EK Janaki Ammal Medal (2002) from the Indian Society of Ethnobotanists for significant contributions and achievements to the field. Cunnningham is from South Africa, and has a doctorate in botany from the University of Cape Town.

Dr. Jane I. Guyer is currently Professor of Anthropology at Johns Hopkins University, after moving in 2002 from Northwestern University where she had been Professor of Anthropology and Director of African Studies since 1994. Professor Guyer, a Woodrow Wilson Fellow in 2003, specializes in African studies, social anthropology, and the study of production and distribution systems, in particular the anthropology of the economy and material life in West and Equatorial Africa. She focuses primarily on the growth and change of indigenous economies, with a special emphasis on food economies and money management outside structured systems. Professor Guyer has authored and co-authored numerous books and articles; her most recent single-authored book is Marginal Gains: Monetary Transactions in Atlantic Africa, which focuses on the function of popular economic systems in Africa, from crisis conditions to ordinary household budgets. Guyer, a U.S. citizen, is from England, and has a doctorate in anthropology from the University of Rochester.

Dr. Hans Herren has been President of the Millennium Institute since 2005. Dr. Herren earlier served as Director General of the International Centre of Insect Physiology and Ecology (ICIPE) in Nairobi for twenty years, prior to which he was with the International Institute of Tropical Agriculture. He is an NAS Foreign Associate (1998), and President of the International Association for the Plant Protection Sciences. An agronomist and entomologist, Dr. Herren has spent most of his working life in Africa, where his research has been on the field-level union of science-led information with local production systems, particularly emphasizing pioneering applications of integrated pest management. His latest research efforts address poverty alleviation, sustainable agricultural productivity, and biodiversity conservation in Africa. Herren's contributions to improving Africa's food security, particularly research and control of the cassava mealybug through the world's largest biological control project, have been recognized through many awards,

including the Tyler Prize for Environmental Achievement and World Food Prize "in recognition for having advanced human development by improving the quality and availability of the world's food supply". Dr. Herren also currently serves as the Editor-in-Chief of the ICIPE-hosted journal, Insect Science and its Application, and is on the Editorial Board of Biological Control Science. Herren is from Switzerland, and has a doctorate in agricultural sciences from its Federal Institute of Technology.

Dr. Calestous Juma is Professor of the Practice of International Development and Director of the Science, Technology and Globalization Project at the John F. Kennedy School of Government at Harvard University. He is a Member of NAS (2005), and has served on many NRC committees. He is also a Member of the Kenya National Academy of Sciences and a Fellow of both the New York Academy of Sciences and the World Academy of Art and Science. Dr. Juma is former Executive Secretary of the United Nations Convention on Biological Diversity and founding Executive Director of the African Centre for Technology Studies in Nairobi, an independent public policy research institution. His research interests, beginning with field work with indigenous vegetables in Kenya, include biological diversity and biotechnology, evolutionary and systems theory, science and technology policy studies, institutional change, and international trade and international environmental policy. He has worked as a teacher, science writer, chief executive officer, and advisor (including USAID), has served on the governing and advisory bodies of several international organizations, and has won many international honors. Dr. Juma has written widely on issues of science, technology and environment, including Science, Technology and Economic Growth: Africa’s Biopolicy Agenda for the 21st Century. United Nations University, Tokyo (2000). Juma is from Kenya, and has a doctorate in science and technology policy studies from the University of Sussex.

Dr. Akinlawon Mabogunje was Chair of the Development Policy Centre in Ibadan, Nigeria until retirement, and serves as co-convener of the international Initiative on Science and Technology for Sustainability. He is also Chairman of the Nigerian Presidential Technical Committee on Housing and Urban Development. He was formerly Professor of Geography, Dean of the Faculty of the Social Science, and Director of the Planning Studies Programme, University of Ibadan, and was also President of the International Geographical Union. He is an NAS Foreign Associate (1999) and is currently a Member of the Committee

on the Geographic Foundation for Agenda 21. He also served as Chairman of the Committee on Human Settlements of the Scientific Committee on Problems of the Environment (SCOPE) of the International Council of Scientific Unions. In addition, he was Chairman of the Advisory Committee of the Urban Management Programme of the United Nations Centre for Human Settlements/United Nations Development Programme and the World Bank, was Vice-Chairman of the Directorate of Food, Roads and Rural Infrastructure, Office of the President, Nigeria, and Executive Chairman of the National Board for Community Banks. Dr. Mabogunje's work seeks to understand continuity and development of rural/urban/regional interactions in Africa over time, with increasing attention to future issues of sustainability. These interactions are especially close in Africa, and his research on the relative contributions of internal and external systems affecting them have recast many assumptions underlying development there. In particular, his work has called attention to the persistence of indigenous structures whose better understanding and utilization can help to more effectively unleash development energies of the people, especially in the rural areas. Among his many published books and academic papers are Urbanization in Nigeria, Regional Planning and National Development in Africa; The Development Process: A spatial perspective; and (as editor) The State of the Earth: Contemporary Geographic Perspectives. Mabogunje is from Nigeria, and has a doctorate in geography from University College London.

Dr. Barbara Underwood, Adjunct Professor of Nutrition (in Pediatrics) at Columbia University, was until recently Scholar in Residence at the U.S. Institute of Medicine, and is the Immediate Past President of the International Union of Nutritional Sciences. Prior to retirement she was Chemist at the National Eye Institute of the U.S. National Institutes of Health, where she also served a secondment as Scientist in the Nutrition Unit of the World Health Organization. Dr. Underwood has broad field association with the great variety and analyses of foods eaten by humans, with 40 years global experience in research and training related to international nutritional deficiency and maternal/child health problems, with recent years devoted to development of global policy and guidelines for the control of micronutrient deficiencies of vitamin A, iron, and iodine. Her work is based on the interactions among food, nutrition, and health in developing countries, with research interests emphasizing studies on vitamin A metabolism, nutritional status assessment, and functional consequences of deficiency. Her laboratory developed and first applied in human populations the Relative Dose Response (RDR)

test to indirectly identify depleted vitamin A stores. In addition, her research and training interests have focused on nutritional problems of mothers and children in deprived circumstances, and she has more than 150 publications in basic and applied nutrition and nutritional biochemistry. Dr. Underwood has served on many international committees, advisory and editorial boards, and consultancies, including USAID, as well as board member of numerous foundations and advisory groups. Underwood is from the U.S., and has a doctorate in nutritional biochemistry from Columbia University.

Dr. Montague Yudelman has been a Senior Fellow at the World Wildlife Fund for Nature (WWF) in Washington, and is a Woodrow Wilson Fellow. He has been involved in international agricultural development for close to 50 years. He was on the staff of the Rockefeller Foundation during the gestation of their international agricultural research program, and later, as the director of Agriculture and Rural Development at the World Bank, he was involved in the planning for and creation of the Consultative Group on International Agricultural Research. Dr. Yudelman retired from the Bank in 1983, and was a Distinguished Fellow at the World Resources Institute prior to affiliating with WWF. He has also taught at Harvard University and the University of Michigan, and served as Vice President of the OECD Development Center. He was Chair of the Board of Trustees of the Population Reference Bureau, and serves on the Board of The Vetiver Network among other organizations. Dr. Yudelman has consulted to numerous institutions, including the Inter-American Development Bank, USAID, the Rockefeller and Ford Foundations, and several foreign governments. He has published widely in the field of agricultural development, food production, and pest management, including the 1964 standard, Africans on the Land; recent publications include IFPRI's 2020 Vision Discussion Paper #32, Integrated Nutrient Management, Soil Fertility, and Sustainable Agriculture: Current Issues and Future Challenges (with Peter Gruhn and Francesco Goletti), 2000, and the concluding chapter, "Agricultural Research in the Tropics: Past and Future", in ISNAR's 1997 expanded edition of The Globalization of Science: The Place of Agricultural Research. Yudelman, a U.S. citizen, is from South Africa, and has a doctorate in agricultural economics from the University of California at Berkeley.

Next: Credits »
Lost Crops of Africa: Volume II: Vegetables Get This Book
× 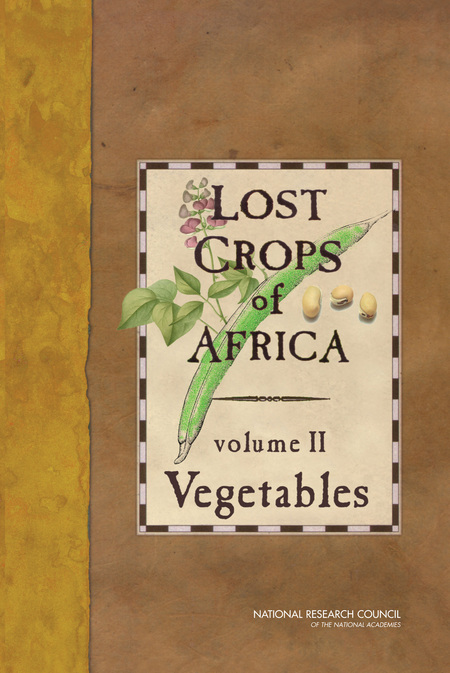 This report is the second in a series of three evaluating underexploited African plant resources that could help broaden and secure Africa's food supply. The volume describes the characteristics of 18 little-known indigenous African vegetables (including tubers and legumes) that have potential as food- and cash-crops but are typically overlooked by scientists and policymakers and in the world at large. The book assesses the potential of each vegetable to help overcome malnutrition, boost food security, foster rural development, and create sustainable landcare in Africa. Each species is described in a separate chapter, based on information gathered from and verified by a pool of experts throughout the world. Volume I describes African grains and Volume III African fruits.