Ending the Tobacco Problem: A Blueprint for the Nation (2007)

Get This Book
Visit NAP.edu/10766 to get more information about this book, to buy it in print, or to download it as a free PDF.
« Previous: Appendix H:Smoking in the Movies: Its Impact on Youth and Youth Smoking
Page 552 Share Cite
Suggested Citation:"Appendix I: State Statutes Governing Direct Shipment of Alcoholic Beverages to Consumers: Precedents for Regulating Tobacco Retail Shipments." Institute of Medicine. 2007. Ending the Tobacco Problem: A Blueprint for the Nation. Washington, DC: The National Academies Press. doi: 10.17226/11795.
×

An important issue in contemporary tobacco control is the regulation of the conditions under which it is permissible for internet retailers or mail-order companies to ship tobacco directly to consumers. Given the difficulty of policing Internet tobacco transactions and constitutional barriers to additional, state-imposed delivery requirements, the only practical way to effectively regulate online tobacco retailers is through legislation prohibiting both online tobacco sales and direct shipment of tobacco products to consumers. Statutes restricting direct shipment of alcoholic beverages provide a precedent for such legislation because most states either explicitly prohibit direct shipment to consumers or do so practically by requiring that all transactions for alcoholic beverages take place within the state’s licensed distribution system. Under a similar legislative scheme, shipment of tobacco products would be restricted to licensed wholesale or retail outlets, and consumers would only be permitted to purchase these products only in face-to-face transactions in licensed retail settings. Such legislation would be effective at a state level, as the New York statute banning direct shipment has demonstrated (Brown & Williamson Tobacco Corp. v. Pataki, 2003), or at a federal level, enforceable by the Bureau of Alcohol, Tobacco, Firearms, and Explosives.

To facilitate a better understanding of the range of mechanisms available for the regulation of online and mail-order tobacco purchases, the following pages review state statutes regulating shipments of alcoholic beverages. Of the states that ban alcohol shipment directly to consumers, most have enacted such prohibitions with respect to all alcoholic beverages, including wine, beer, and liquor. State statutes restricting direct shipment to consumers typically require that individuals importing alcoholic beverages from outside the state hold a commercial wholesaler’s or importer’s license.1 Under tiered distribution systems, manufacturers may sell alcoholic beverages to licensed wholesale distributors, who may sell to retailers, who, in turn, make the products available to consumers. By requiring that all direct shipments take place within this system,

states effectively prevent out-of-state manufacturers, wholesalers, and retailers from selling directly to state residents.2 Through either outright prohibitions against direct shipment or tiered distribution systems, states are able to closely regulate commerce in alcoholic beverages and limit opportunities for minors to purchase these products.

In contrast, a few other states require the in-state consumer to receive either the express permission of the state’s alcohol control board or a license authorizing importation from outside of the state. Hawaii permits residents to import up to 5 gallons of alcoholic beverages into the state provided they obtain a prior approval in the form of a single-shipment permit issued by the state’s alcohol control board. Ohio allows importation upon completion of an application to the state liquor control board, but limits direct shipment under these conditions to beer and wine.7 Montana permits importation by residents who hold connoisseur’s licenses, but also limits shipments to beer and wine.8 Vermont allows individuals to import liquor, beer, or wine into the state if they hold a permit issued by the liquor control board; otherwise, the state grants exclusive authority to import alcoholic beverages to the control board.9

Notwithstanding the restrictions described above, most states have created statutory exceptions to their direct shipment laws to allow for private importation of wine. The 2002 Department of Justice Appropriations Authorization Act requires that all states permit direct shipment of wine to state residents provided that: (1) the wine was purchased while the purchaser was physically present at the winery, (2) the purchaser of the wine provided the winery verification of legal age to purchase alcohol, (3) the shipping container in which the wine is shipped is marked to require an adult’s signature upon delivery, (4) the wine is for personal use only and not for resale, and (5) the purchaser could have carried the wine lawfully into the state (or the District of Columbia) to which the wine is shipped.10 A number of states—including Arizona, Georgia, Louisiana, Nebraska, Nevada, New Hampshire, North Carolina, North Dakota, Rhode Island, South Carolina, Texas, Wyoming, and the District of Columbia—permit additional limited direct shipment of wine from out-of-state sellers, even beyond the conditions imposed by the federal

Many of the states that allow direct shipment exceptions for wine have followed the Wine Industry Model Direct Shipping Bill developed by the National Conference of State Legislatures.14 The Model Bill limits the quantity of shipments to two cases per month, requires that packages bear a label indicating that a signature of a person 21 years of age or older is necessary for delivery, and requires that sellers report all shipments to state authorities annually.15 Many states also require that recipients of alcoholic beverages present a valid form of identification so that common carriers may verify their age. For example, North Carolina, Texas, and Virginia all require that common carriers obtain proof of identification prior to delivery of direct shipments of alcoholic beverages to confirm that recipients are 21 years of age or older.16

A recent Supreme Court decision invalidated restrictions on the direct shipment of wine that distinguished between in-state and out-of-state retailers, but left intact legal justifications for nondiscriminatory direct shipment laws (Granholm v. Heald, 544 U.S. 460 [U.S. 2005]). While the Court rejected the states’ arguments that banning interstate shipments was necessary to curb underage drinking, the majority’s consideration of the facts indicated that the Court would permit narrow restrictions on beverages that are more popular with underage drinkers, such as beer,

wine coolers, and liquors. The Court also explicitly encouraged less restrictive measures to minimize the risk of direct shipment of alcohol to minors, recommending that states enact provisions such as those provided in the Model Direct Shipping Bill. The Court was clear, however, that states will bear the burden of proof to demonstrate the need for any difference in treatment between in-state and out-of-state producers.

Next: Appendix J: The Role of Public Policies in Reducing Smoking Prevalence: Results from the SimSmoke Tobacco Policy Simulation Model »
Ending the Tobacco Problem: A Blueprint for the Nation Get This Book
× 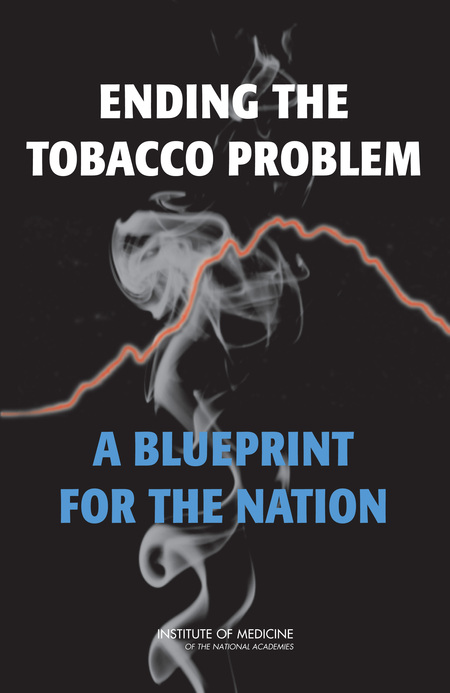 The nation has made tremendous progress in reducing tobacco use during the past 40 years. Despite extensive knowledge about successful interventions, however, approximately one-quarter of American adults still smoke. Tobacco-related illnesses and death place a huge burden on our society.

Ending the Tobacco Problem generates a blueprint for the nation in the struggle to reduce tobacco use. The report reviews effective prevention and treatment interventions and considers a set of new tobacco control policies for adoption by federal and state governments. Carefully constructed with two distinct parts, the book first provides background information on the history and nature of tobacco use, developing the context for the policy blueprint proposed in the second half of the report. The report documents the extraordinary growth of tobacco use during the first half of the 20th century as well as its subsequent reversal in the mid-1960s (in the wake of findings from the Surgeon General). It also reviews the addictive properties of nicotine, delving into the factors that make it so difficult for people to quit and examines recent trends in tobacco use. In addition, an overview of the development of governmental and nongovernmental tobacco control efforts is provided.

After reviewing the ethical grounding of tobacco control, the second half of the book sets forth to present a blueprint for ending the tobacco problem. The book offers broad-reaching recommendations targeting federal, state, local, nonprofit and for-profit entities. This book also identifies the benefits to society when fully implementing effective tobacco control interventions and policies.