Get This Book
Visit NAP.edu/10766 to get more information about this book, to buy it in print, or to download it as a free PDF.
Page i Share Cite
Suggested Citation:"Front Matter." Institute of Medicine. 2007. Long-Term Health Effects of Participation in Project SHAD (Shipboard Hazard and Defense). Washington, DC: The National Academies Press. doi: 10.17226/11900.
×

with Oversight from the

Board on Military and Veterans Health

INSTITUTE OF MEDICINE OF THE NATIONAL ACADEMIES

This study was supported by Contract No. V101(93)P-1637, T/0#26 between the National Academy of Sciences and the Department of Veterans Affairs. Any opinions, findings, conclusions, or recommendations expressed in this publication are those of the authors and do not necessarily reflect the view of the organizations or agencies that provided support for this project.

The serpent has been a symbol of long life, healing, and knowledge among almost all cultures and religions since the beginning of recorded history. The serpent adopted as a logotype by the Institute of Medicine is a relief carving from ancient Greece, now held by the Staatliche Museum in Berlin.

“Knowing is not enough; we must apply.

Willing is not enough; we must do.” 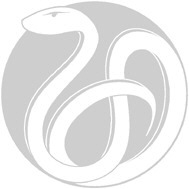 INSTITUTE OF MEDICINE OF THE NATIONAL ACADEMIES

Center for Research on Occupational and Environmental Toxicology, Oregon Health and Science University

Board on Military and Veterans Health/Medical Follow-Up Agency

Our study of the long-term health effects of participation in Project SHAD (Shipboard Hazard and Defense) posed a number of challenges, including difficulties in identifying all the Project SHAD participants, assembling an appropriate control group, devising and administering a suitable survey instrument, and producing a sound analysis and accompanying report. We could not have achieved the results we did without a great deal of help.

Throughout this study, Institute of Medicine (IOM) staff have relied especially on the good guidance of our expert advisory panel. Its members included experts in biostatistics, epidemiology, survey research, infectious disease epidemiology, toxicology, and military veteran epidemiology. We could not have persevered through all of the difficult challenges we faced without their help and support. Nonetheless, although the expert panel provided sound guidance for which the study and this report are better, the authoring staff take full responsibility for the final product.

We are also grateful especially to the military veterans who provided us with information, support, and encouragement. Without their willingness to donate their time and effort in support of this project, this study would not have been possible.

The study of the health effects of participation in Project SHAD was a large enterprise, and the list of people who deserve recognition for their contribution is enormous. Members of the Medical Follow-Up Agency (MFUA) data operations staff who worked on this study include Dwayne Bell, Jihad Daghmash, John Larson, Robert Mathes, Al Mattei, and Noreen Stephenson. Richard Miller, former Director of MFUA, provided valuable guidance for this study.

The data collection efforts for the Project SHAD study involved many people outside of MFUA. We appreciate the efforts of Robert Bilgrad and staff at the National Death Index; Barbara Bauman and staff at the National Personnel Records Center in St. Louis, Missouri; the staff at the National Archives in College Park, MD (Archives II); and staff at many federal archives centers and Department of Veterans Affairs (VA) regional offices across the country, especially the VA regional office in the District of Columbia. We relied on a few consultants external to the staff for some technical work critical to the conduct of the study, including Victor Miller, James Quinn, and Ada Youk. We are particularly grateful to SRBI, Inc., who conducted the telephone interviews for our health survey, especially John Boyle, Stephen Dienstfrey, and Paul Schroeder.

The MFUA staff has benefited from the vigilance and enthusiasm of many interested veterans, including Jack Alderson, Robert Bates, Jim Druckemiller, Norman LaChapelle, and John Olsen. The latter two also served on the Project SHAD Task Force, chaired by Jack Devine, of the Vietnam Veterans of America (VVA), whom we also thank for their assistance. We are especially grateful to Rick Weidman and Bernard Edelman, VVA staff, for their help and support throughout the study.

The current members of the Advisory Panel for the Study of Long-Term Health Effects of Participation in Project SHAD (Shipboard Hazard and Defense)—chair Daniel H. Freeman, Jr., Dan G. Blazer, Donald S. Burke, Linda D. Cowan, Gregory C. Gray, and Peter S. Spencer—have helped to ensure the quality of the logic followed in the conduct of this study. We thank them and assume responsibility for whatever items of advice they offered that we did not take.

Mark Brown and Han Kang of the VA have provided us valuable help, and Michael Kilpatrick and his staff at the Department of Defense’s Force Health Protection and Readiness Program (formerly Deployment Health) have been particularly helpful to us. We wish to single out Dee Morris and Roy Finno for their special assistance on this project.

Lara Andersen, Sue Barron, Andrea Cohen, James Jensen, Linda Kilroy, Bronwyn Schrecker, Christine Stencel and the many other staff at the Institute of Medicine and the National Academies all helped along the way. Special thanks to Medical Follow-up Agency Director, Frederick (Rick) Erdtmann, and administrative assistant, Pamela Ramey-McCray, who provided much appreciated support to the project.

We—William Page, Harriet Crawford, and Heather Young Durick—thank everyone on this list (and perhaps a few whose names we have unintentionally omitted) for producing with us this report.

Next: Summary »
Long-Term Health Effects of Participation in Project SHAD (Shipboard Hazard and Defense) Get This Book
× 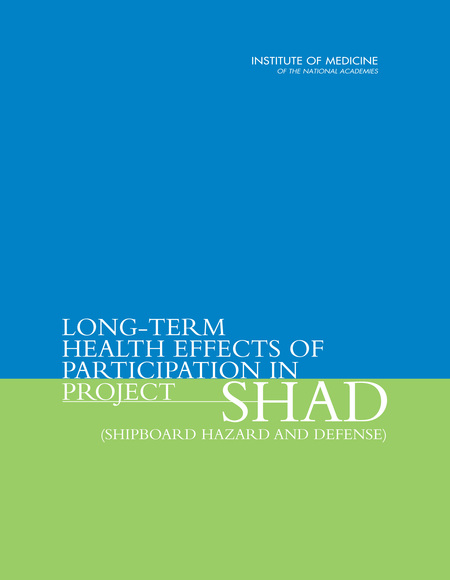 More than 5,800 military personnel, mostly Navy personnel and Marines, participated in a series of tests of U.S. warship vulnerability to biological and chemical warfare agents, Project SHAD (Shipboard Hazard and Defense), in the period 1962-1973. Only some of the involved military personnel were aware of these tests at the time. Many of these tests used simulants, substances with the physical properties of a chemical or biological warfare agent, thought at the time to have been harmless. The existence of these tests did not come to light until many decades later.

In September 2002, the Institute of Medicine (IOM) agreed to undertake a scientific study, funded by the Veterans' Affairs, of potential long-term health effects of participation in Project SHAD. In general, there was no difference in all-cause mortality between Project SHAD participants and nonparticipant controls, although participants statistically had a significantly higher risk of death due to heart disease, had higher levels of neurodegenerative medical conditions and higher rates of symptoms with no medical basis.