Visit NAP.edu/10766 to get more information about this book, to buy it in print, or to download it as a free PDF.
Page i Share Cite
Suggested Citation:"Front Matter." National Research Council. 2008. Martha Muse Prize for Science and Policy in Antarctica: An International Polar Year Legacy. Washington, DC: The National Academies Press. doi: 10.17226/12217.
×

Martha Muse Prize for Science and Policy in Antarctica An International Polar Year Legacy Committee on the Design of the Martha Muse Award to Support the Advancement of Antarctic Researchers Polar Research Board Division on Earth and Life Studies THE NATIONAL ACADEMIES PRESS Washington, DC www.nap.edu

THE NATIONAL ACADEMIES PRESS 500 Fifth Street, NW Washington, DC 20001 NOTICE: The project that is the subject of this report was approved by the Governing Board of the National Research Council, whose members are drawn from the councils of the National Academy of Sciences, the National Academy of Engineering, and the Institute of Medicine. The members of the committee responsible for the report were chosen for their special competences and with regard for appropriate balance. This study was supported by the Tinker Foundation. Any opinions, findings, conclusions, or recommendations expressed in this publication are those of the author(s) and do not necessarily reflect the views of the organization that provided support for the project. Additional copies of this report are available from the National Academies Press, 500 Fifth Street, NW, Lockbox 285, Washington, DC 20055; (800) 624-6242 or (202) 334-3313 (in the Washington metropolitan area); Internet, http://www.nap.edu. Copyright 2008 by the National Academy of Sciences. All rights reserved. Printed in the United States of America

Acknowledgments This report has been reviewed in draft form by persons chosen for their diverse perspectives and technical expertise in accordance with procedures approved by the National Research Councilâs Report Review Committee. The purpose of this independent review is to provide candid and critical comments that will assist the institution in making its published report as sound as possible and to ensure that the report meets institutional standards of objectivity, evidence, and responsiveness to the study charge. The review comments and draft manuscript remain confidential to protect the integrity of the deliberative process. We thank the following for their participation in their review of this report: CLIVE HOWARD-WILLIAMS, National Institute of Water and Atmospheric Research, Christchurch, New Zealand GÃRARD JUGIE, Institut Polaire FranÃ§ais Paul Ãmile Victor, PlouzanÃ©, France DAVID M. KARL, University of Hawaii, Honolulu JOSÃ RETAMALES, Instituto Nacional AntÃ¡rtico Chileno, Punta Arenas, Chile Although the reviewers listed above have provided many constructive comments and suggestions, they were not asked to endorse the conclusions or recommendations, nor did they see the final draft of the report before its release. The review of this report was overseen by Mary R. Albert, U.S. Army Corps of Engineers, Hanover, New Hampshire, appointed by the Divison on Earth and Life Studies, who was responsible for making certain that an independent examination of this report was carried out in accordance with institutional procedures and that all review comments were carefully considered. Responsibility for the final content of this report rests entirely with the authoring committee and the National Research Council. The report was enhanced by the participants in the committeeâs meeting. The committee acknowledges the efforts of those who gave presentations: Jennifer Baeseman, University of Alaska, Fairbanks; John Brauman, Stanford University; Renate Rennie, Tinker Foundation; and Steve Scudder, American Bar Association. Their input helped to set the stage for fruitful discussions. vii

Next: Summary »
Martha Muse Prize for Science and Policy in Antarctica: An International Polar Year Legacy Get This Book
× 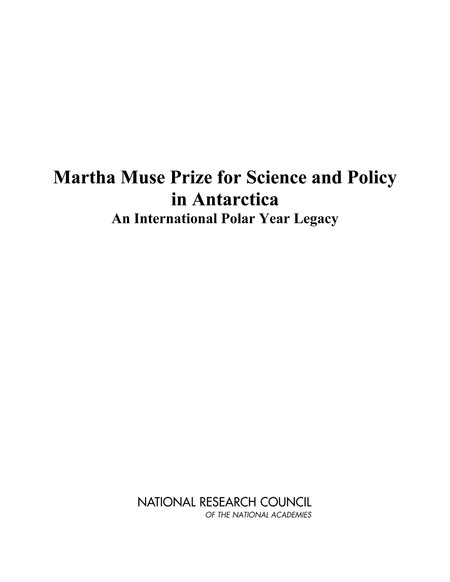 International Polar Year (IPY) 2007--2008 is an intense, coordinated field campaign of polar observations, research, and analysis. It is one of the largest collaborative science programs ever attempted, involving more than 200 projects and people from more than 60 nations. In honor of its long-time leader, Ms. Martha Twitchell Muse, and to provide a lasting legacy of IPY, the Tinker Foundation is establishing an annual, prestigious prize: the Martha Muse IPY Prize for Science and Policy in Antarctica This $100,000 unrestricted prize will be awarded following a nominations process similar to that of the National Medal of Science, meaning that people are nominated by others in the community. The goal is to provide recognition of the individual's outstanding and important work and to call attention to the importance of understanding Antarctica in this time of global climate change. This book outlines the strategy and steps necessary to take the Martha Muse Prize from concept to implementation. It describes the prize's purpose and nature, the system that could be used to announce the prize and collect nominations, potential procedures to be used by the Selection Committee, and possible post-award activities.