Visit NAP.edu/10766 to get more information about this book, to buy it in print, or to download it as a free PDF.
« Previous: Appendix E: Useful Questions
Page 151 Share Cite
Suggested Citation:"Readings." National Research Council. 1978. The Swine Flu Affair: Decision-Making on a Slippery Disease. Washington, DC: The National Academies Press.
×

sion, April 1 and August 5, 1976. eign Commerce, Ninety-fourth Congress, Second Session, Serial Contemporary introduction to the No. 94-113, June 28, July 20, 23 swine flu programâs logic and in- and September 13, 1976. tentions. The August hearing deals with liability. Wide-ranging discussion of the swine flu program; emphasizes House of Representatives, Supplemen- liability issues. Detail on posi- tal Hearings, Subcommittee on tions of drug and insurance firms Health and the Environment, as well as public officials. Committee on Interstate and For- 152

Next: Notes »
The Swine Flu Affair: Decision-Making on a Slippery Disease Get This Book
× 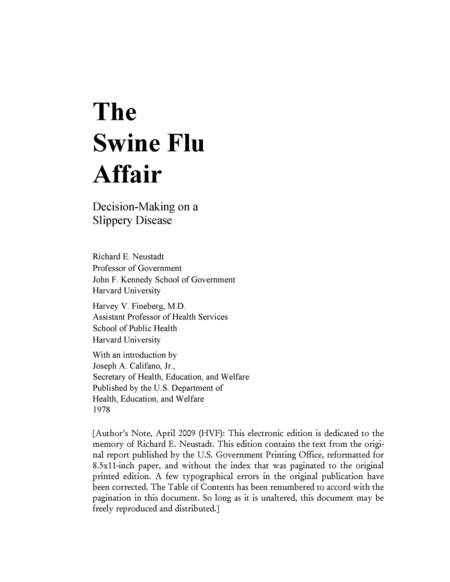