Respiratory Protection for Healthcare Workers in the Workplace Against Novel H1N1 Influenza A: A Letter Report (2009)

Visit NAP.edu/10766 to get more information about this book, to buy it in print, or to download it as a free PDF.
Page i Share Cite
Suggested Citation:"Front Matter." Institute of Medicine. 2009. Respiratory Protection for Healthcare Workers in the Workplace Against Novel H1N1 Influenza A: A Letter Report. Washington, DC: The National Academies Press. doi: 10.17226/12748.
×

THE NATIONAL ACADEMIES PRESS â¢ 500 Fifth Street, N.W. â¢ Washington, DC 20001 NOTICE: The project that is the subject of this report was approved by the Governing Board of the National Research Council, whose members are drawn from the councils of the National Academy of Sciences, the National Academy of Engineering, and the Institute of Medicine. The members of the committee responsible for the report were chosen for their special competences and with regard for appropriate balance. This study was requested by the Centers for Disease Control and Prevention and the Occupational Safety and Health Administration and supported by Award No. 200-2005-13434, T.O. #19 between the National Academy of Sciences and the Centers for Disease Control and Prevention. Any opinions, findings, conclusions, or recommendations expressed in this publication are those of the author(s) and do not necessarily reflect the view of the organizations or agencies that provided support for this project. Additional copies of this report are available from the National Academies Press, 500 Fifth Street, N.W., Lockbox 285, Washington, DC 20055; (800) 624- 6242 or (202) 334-3313 (in the Washington metropolitan area); Internet, http://www.nap.edu. For more information about the Institute of Medicine, visit the IOM home page at: www.iom.edu. Copyright 2009 by the National Academy of Sciences. All rights reserved. Printed in the United States of America Suggested citation: IOM (Institute of Medicine). 2009. Respiratory protection for healthcare workers in the workplace against novel H1N1 influenza A: A letter report. Washington, DC: The National Academies Press.

Reviewers This report has been reviewed in draft form by individuals chosen for their diverse perspectives and technical expertise, in accordance with procedures approved by the National Research Councilâs Report Review Committee. The purpose of this independent review is to provide candid and critical comments that will assist the institution in making its pub- lished report as sound as possible and to ensure that the report meets in- stitutional standards for objectivity, evidence, and responsiveness to the study charge. The review comments and draft manuscript remain confi- dential to protect the integrity of the deliberative process. We wish to thank the following individuals for their review of this report: Lisa Brosseau, University of Minnesota Elizabeth Bryce, Vancouver General Hospital Frederick M. Burkle, Jr., Johns Hopkins University Ruth Carrico, University of Louisville Carrie Dorsey, University of Maryland Elaine L. Larson, Columbia University Jean Patterson, Southwest Foundation for Biomedical Research John Schaefer, Johns Hopkins University Peg Seminario, AFL-CIO Bruce Tatarchuk, Auburn University Lawrence M. Wein, Stanford University Douglas B. White, University of Pittsburgh Medical Center Although the reviewers listed above have provided many construc- tive comments and suggestions, they were not asked to endorse the con- clusions or recommendations, nor did they see the final draft of the vii

viii REVIEWERS report before its release. The review of this report was overseen by Donald Burke, University of Pittsburgh and Fred Murphy, The University of Texas Medical Branch at Galveston. Appointed by the National Research Council and Institute of Medicine, they were respon- sible for making certain that an independent examination of this report was carried out in accordance with institutional procedures and that all review comments were carefully considered. Responsibility for the final content of this report rests entirely with the authoring committee and the institution.

Next: Letter Report »
Respiratory Protection for Healthcare Workers in the Workplace Against Novel H1N1 Influenza A: A Letter Report Get This Book
× 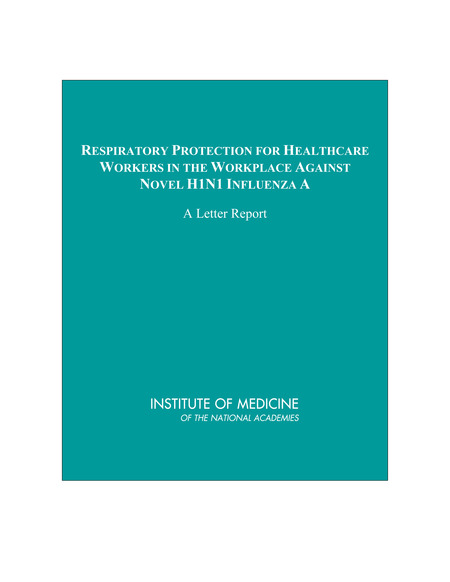 In the event that the H1N1 virus creates a surge of patients during the upcoming flu season, it will be critical to protect health care workers from infection, given their central role in treating sick people and lessening the pandemic's overall impact.

This new report from the Institute of Medicine recommends strategies for health care organizations and employees to prepare for the H1N1 virus. These recommendations include wearing fitted N95 respirators to guard against respiratory infection by the virus, and establishing policies for innovative triage processes, handwashing, disinfection, and more. The report also calls for a boost in research to answer questions about how the flu viruses can be spread, and to design and develop better protective equipment that would enhance workers' comfort, safety, and ability to do their jobs.