Visit NAP.edu/10766 to get more information about this book, to buy it in print, or to download it as a free PDF.
Page i Share Cite
Suggested Citation:"Front Matter." National Research Council. 2009. Science at Sea: Meeting Future Oceanographic Goals with a Robust Academic Research Fleet. Washington, DC: The National Academies Press. doi: 10.17226/12775.
×

Preface The vastness of the ocean invites, but then defies, simple description. The ocean encompasses more than 70 percent of the Earthâs surface, with depths of almost 11,000 meters. The ocean system plays an essential role in weather and climate. Winds drive the continual circulation of the ocean currents. Some parts of the ocean are ice-covered all or part of the year. The ocean has a very large heat capacity, is a major carbon dioxide sink, and has the ability to buffer, absorb, and disperse chemicals. Billions of people are fed with biomass from the ocean, and the oceans are important avenues for commerce, recreation, and national defense. The ocean pre- serves a record of Earthâs climatic processes and an archaeological record of human civilization. Although the ocean is large, it is not immune to natural or human-induced change. For example, the ocean is warming and acidifying, and the worldâs fisheries are severely stressed. Marine debris from both ships and land is cluttering the ocean, while nutrient pollution and toxic runoff pose threats to marine life and human health. The ocean, vital though it may be, is extraordinarily difficult to sense and model.Â The endlessly complex and variable seas are undersampled. Oceanographic research is still in discovery mode, with each year bring- ing unimagined new surprises. Studying the biota or the shape of the ocean floor requires sensing or traversing through thousands of meters of pitch black, frigid water at enormous pressures.Â  These conditions define the scientific challenge we call oceanography. For centuries, ships have provided the primary means of observing and measuring ocean parameters. Technology and invention have pro- vii

viii PREFACE duced many improvements, with moored and hard-wired sensors and with an increasingly sophisticated family of autonomous vehicles. The Committee on Evolution of the National Oceanographic Research Fleet was convened by the National Research Council to assist the Office of Naval Research and the National Science Foundation in determining how rapid advancements in ocean observing technology and rising costs will impact the future U.S. academic research fleet relative to Navy needs. An excellent group of scientists with expertise in physical, chemi- cal, and biological oceanography, marine geology and geophysics, atmo- spheric science, ocean engineering, naval architecture, and ship opera- tions and policy volunteered their time and talent for this study. The committee met fourÂ times over the course of six months in 2008 and 2009. In open sessions in Washington, D.C., and Woods Hole, Massachusetts, the committee called upon a cadre of marine experts to shed light on its charge.Â The primary goal of these meetings was to understand how devel- opments in both science and technology would impact oceanographersâ needs for research vessels. RADM Richard Pittenger, co-chair Ronald K. Kiss, co-chair

 ACKNOWLEDGMENTS published report as sound as possible and to ensure that the report meets institutional standards for objectivity, evidence, and responsiveness to the study charge. The review comments and draft manuscript remain confidential to protect the integrity of the deliberative process. We wish to thank the following individuals for their participation in the review of this report: James Bellingham, Monterey Bay Aquarium Research Institute, Moss Landing, California DelWayne Bohnenstiehl, North Carolina State University, Raleigh Robert Embley, National Oceanic and Atmospheric Administration, Newport, Oregon James McWilliams, University of California, Los Angeles, California Christopher Measures, University of Hawaii, Manoa, Honolulu Mike Prince, Moss Landing Marine Laboratories, California Martin Visbeck, University of Kiel, Germany Dick West, Consortium for Oceanographic Research and Education (retired), Coventry, Rhode Island Peter Wiebe, Woods Hole Oceanographic Institution, Woods Hole, Massachusetts Robin Williams, Robin A. Williams & Co. Ltd., Barry, Wales, United Kingdom Marc Willis, Oregon State University, Corvallis Although the reviewers listed above have provided many constructive comments and suggestions, they were not asked to endorse the conclu- sions or recommendations nor did they see the final draft of the report before its release. The review of this report was overseen by Robert A. Duce, Texas A&M University, College Station. Appointed by the National Research Council, he was responsible for making certain that an inde- pendent examination of this report was carried out in accordance with institutional procedures and that all review comments were carefully considered. Responsibility for the final content of this report rests entirely with the authoring committee and the institution.

Next: Summary »
Science at Sea: Meeting Future Oceanographic Goals with a Robust Academic Research Fleet Get This Book
× 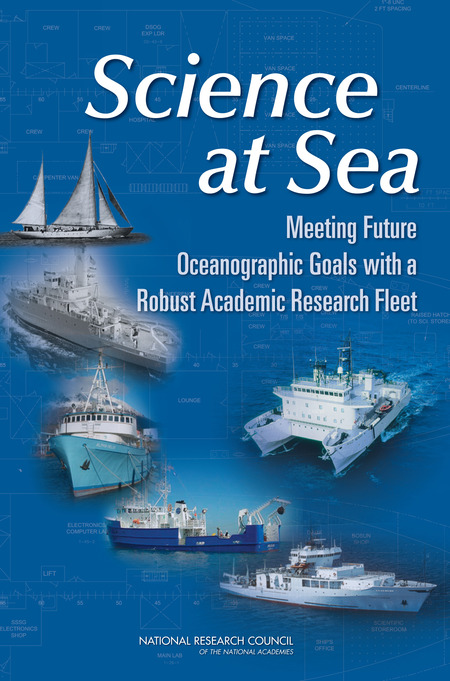 The U.S. academic research fleet is an essential national resource, and it is likely that scientific demands on the fleet will increase. Oceanographers are embracing a host of remote technologies that can facilitate the collection of data, but will continue to require capable, adaptable research vessels for access to the sea for the foreseeable future. Maintaining U.S. leadership in ocean research will require investing in larger and more capable general purpose Global and Regional class ships; involving the scientific community in all phases of ship design and acquisition; and improving coordination between agencies that operate research fleets.