A Transportation Research Program for Mitigating and Adapting to Climate Change and Conserving Energy: Special Report 299 (2009)

Get This Book
Visit NAP.edu/10766 to get more information about this book, to buy it in print, or to download it as a free PDF.
Page i Share
Suggested Citation:"Front Matter." Transportation Research Board. 2009. A Transportation Research Program for Mitigating and Adapting to Climate Change and Conserving Energy: Special Report 299. Washington, DC: The National Academies Press. doi: 10.17226/12801.
×

TRANSPORTATION RESEARCH BOARD OF THE NATIONAL ACADEMIES

This study was sponsored by the Transportation Research Board.

The National Academy of Sciences is a private, nonprofit, self-perpetuating society of distinguished scholars engaged in scientific and engineering research, dedicated to the furtherance of science and technology and to their use for the general welfare. On the authority of the charter granted to it by the Congress in 1863, the Academy has a mandate that requires it to advise the federal government on scientific and technical matters. Dr. Ralph J. Cicerone is president of the National Academy of Sciences.

The Institute of Medicine was established in 1970 by the National Academy of Sciences to secure the services of eminent members of appropriate professions in the examination of policy matters pertaining to the health of the public. The Institute acts under the responsibility given to the National Academy of Sciences by its congressional charter to be an adviser to the federal government and, on its own initiative, to identify issues of medical care, research, and education. Dr. Harvey V. Fineberg is president of the Institute of Medicine.

In mid-2008, the Transportation Research Board (TRB) Executive Committee recognized that major legislation might be enacted in 2009 that could have profound effects on future surface transportation policies at all levels of government. The congressional reauthorization of surface transportation legislation, then due by October 1, 2009, was being considered, and the United States Senate was debating proposals to address climate change through a system that would regulate the total amount of greenhouse gases (GHGs) that could be emitted annually. As the sector with the fastest-growing share of carbon dioxide emissions (the main transportation GHG), transportation was sure to be affected by such legislation.

The Executive Committee recognized that new research and policy analysis would be needed to inform decisions at all levels of government in responding to the challenges of reducing transportation energy consumption and GHG emissions. In reviewing proposals for transportation research programs as part of reauthorizing the federal surface transportation program, the Executive Committee also recognized a gap: no proposals explicitly addressed research to mitigate GHG emissions and energy consumption attributable to passenger and freight travel or to adapt to climate change. Also of concern was the lack of discussion and analysis concerning how proposals to change travel demand might interact with the system in place to raise revenues for surface transportation. Currently, about two-thirds of the revenues raised from users to help pay for the construction, maintenance, and operation of highway and transit systems—more than $100 billion annually—comes from motor fuel taxes on highway

users.1 In response to its concerns about gaps in proposed research programs, the Executive Committee recommended a study to suggest research programs to fill those gaps. This report is the product of that study.

The Executive Committee and the National Research Council (NRC) approved the following statement of task:

This project will develop research program proposals that would address major questions and technical issues regarding transportation strategies to mitigate energy consumption and GHG emissions, replace or supplement fuel taxes with an alternative user fee system, and adapt to expected climate changes. Given the relatively short time frame available for the project, the research program proposals will be conceptual in nature. Nonetheless, they will have enough detail to provide policy makers with information about the nature of the research programs that are needed, the approximate cost of these programs, and how they could be most effectively organized to deliver implementable results in a timely manner.

The Executive Committee’s intent was to identify research needs with regard to policies and strategies relating to the use of the transportation system and to assist infrastructure owners in adapting to climate change. Policies and governmental research programs concerning motor vehicle fuels and propulsion systems have been and are being addressed by other recent and ongoing NRC activities;2 thus, this report does not recommend research on motor vehicles or fuels. The report focuses on surface

transportation infrastructure and operations, specifically on research programs that could provide guidance to officials at all levels responsible for policies that affect the use of such infrastructure and its operation, maintenance, and construction. The report also aims to help officials begin to adapt the infrastructure to climate changes that are already occurring or that are expected to occur in the next several decades.

Even this narrowing of the scope of the charge leaves the committee open to take stock of a vast literature in transportation economics, planning, land use policy, design, construction, maintenance, and operations and to consider insights that might be drawn from this material to develop transportation mitigation and adaptation strategies. Given the constraints of time and funding, the committee has addressed this task by applying its judgment to gaps in the literature and by recommending deeper inquiries into the existing knowledge base to inform public policy as an essential element of the research program it identifies.

NRC appointed a committee of experts to conduct this study under the chairmanship of Michael D. Meyer of the Georgia Institute of Technology. The members have expertise in transportation and environmental policy, administration of transportation programs, and research. The background and affiliations of the members are described at the end of this document. To carry out the study, the committee organized its work into three areas, two of which built on the prior work of NRC-appointed committees:

missioned a paper by James Whitty and John Svadlenak of the Oregon Department of Transportation, both of whom had been centrally involved in Oregon’s multiyear demonstration program of mileage charging concepts. These authors were asked to build on the recommendations made in Special Report 285: The Fuel Tax and Alternatives for Transportation Funding.

Initial drafts of these papers were presented and discussed at special sessions held during the 2009 TRB Annual Meeting [in a session of the TRB Executive Committee, in a joint meeting with a World Road Association (Permanent International Association of Road Congresses) committee on the environment and the TRB Special Task Force on Climate Change and Energy, and in a working meeting of the Special Task Force]. The authors responded to comments. The committee has drawn on the commissioned papers in the development of its report. Copies of the finished papers are available on the TRB website.

Since the initiation of this study, other major reports have recommended research and demonstration programs to test the concept of mileage taxes as a replacement or supplement to the motor fuel tax, which, along with other considerations, led the committee to give this topic less emphasis in its report. The recommendations of these other reports and the linkage of mileage tax proposals to potential transportation mitigation policies are referred to in Chapter 3 and summarized in more detail in Appendix A of this report.

The committee received briefings at its meetings from Jack Wells of the U.S. Department of Transportation; Ken Adler, Megan Susman, and John Thomas of the U.S. Environmental Protection Agency; Charles Kooshian of the Center for Clean Air Policy; John Heywood of the Massachusetts Institute of Technology; Steven Plotkin of Argonne National Laboratory; and Joanne Potter of Cambridge Systematics. The committee thanks these individuals for their contributions. The committee also expresses its appreciation to Cynthia Burbank, Sue McNeil, James Whitty, and John Svadlenak, whose contributions and efforts in preparing their commissioned papers far exceed the compensation the committee was able to provide to them.

The report has been reviewed in draft form by individuals chosen for their diverse perspectives and technical expertise in accordance with procedures approved by NRC’s Report Review Committee. The purpose of this independent review is to provide candid and critical comments that assist the authors and NRC in making the published report as sound as possible and to ensure that the report meets institutional standards for objectivity, evidence, and responsiveness to the study charge. The contents of the review comments and draft manuscript remain confidential to protect the integrity of the deliberative process. The committee thanks the following individuals for their participation in the review of this report: A. Ray Chamberlain, Fort Collins, Colorado; Randall D. Crane, University of California, Los Angeles; David L. Greene, Oak Ridge National Laboratory, Knoxville, Tennessee; Maxine L. Savitz, Los Angeles, California; Henry G. (Gerry) Schwartz, Jr., St. Louis, Missouri; Martin Wachs, RAND Corporation, Santa Monica, California; and Richard N. Wright, Montgomery Village, Maryland.

Although the reviewers listed above provided many constructive comments and suggestions, they were not asked to endorse the committee’s conclusions or recommendations, nor did they see the final draft of the report before its release. The review of this report was overseen by Susan Hanson, Clark University, Worcester, Massachusetts, and C. Michael Walton, University of Texas at Austin. Appointed by NRC, they were responsible for making certain that an independent examination of the report was carried out in accordance with institutional procedures and that all review comments were carefully considered. Responsibility for the final content of this report rests entirely with the authoring committee and the institution.

Stephen R. Godwin, TRB’s Director of Studies and Special Programs, managed the study and drafted the final report under the guidance of the committee. Suzanne Schneider, Associate Executive Director of TRB, managed the report review process. Special appreciation is expressed to Norman Solomon, who edited the report; Jennifer J. Weeks, who prepared and formatted the report for web posting; and Juanita Green, who managed the book design and production, all under the supervision of Javy Awan, Director of Publications. Amelia Mathis assisted with meeting arrangements and communications with committee members.

Next: Executive Summary »
A Transportation Research Program for Mitigating and Adapting to Climate Change and Conserving Energy: Special Report 299 Get This Book
× 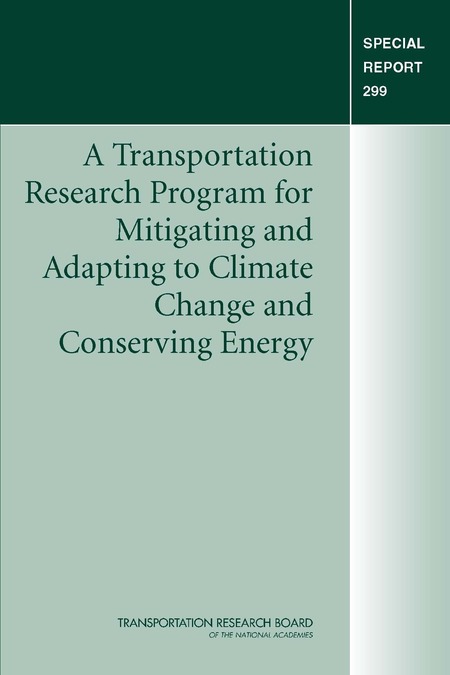 Specifically, this book identifies research needs with regard to policies and strategies relating to the use of the transportation system and to assist infrastructure owners in adapting to climate change; focuses on research programs that could provide guidance to officials at all levels responsible for policies that affect the use of surface transportation infrastructure and its operation, maintenance, and construction; and aims to help officials begin to adapt the infrastructure to climate changes that are already occurring or that are expected to occur in the next several decades.