Get This Book
Visit NAP.edu/10766 to get more information about this book, to buy it in print, or to download it as a free PDF.
« Previous: Summary
Page 7 Share Cite
Suggested Citation:"1 Introduction." National Research Council. 2010. Defending Planet Earth: Near-Earth-Object Surveys and Hazard Mitigation Strategies. Washington, DC: The National Academies Press. doi: 10.17226/12842.
×

Our planet inhabits a hazardous environment. Earth is continually bombarded by cosmic objects. Luckily for its inhabitants, most of these objects are very small and cause no harm to life. Some, however, are large and cause considerable harm. Evidence of these collisions, large and small, is abundant, from the dense defacement of Mercury and the Moon to the craters festooning the surfaces of even small asteroids. Although impacts of cosmic objects on Earth have occurred since its very formation, humanity has been at best dimly aware of these events until very recently. Only two centuries ago it was widely doubted that objects orbiting the Sun could or would collide with Earth.

In general, scientists cannot predict precise times and locations of future impacts but can make statistical statements about the probability of an impact. Objects larger than about 30 meters in diameter probably strike Earth only about once every few centuries, and objects greater than about 300 meters in diameter only once per hundred millennia. Even objects only 30 meters in diameter can cause immense damage. The cosmic intruder that exploded over Siberia in 1908 may have been only a few tens of meters in size, yet this explosion severely damaged a forest of more than 2,000 square kilometers (Chyba, 1993; Boslough and Crawford, 1997, 2008). Had an airburst of such magnitude occurred over New York City, hundreds of thousands of deaths might have resulted.

Assessing risk is difficult primarily because of the lack of sufficient data. The committee’s best current estimates are given in Chapter 2, where the risk is presented, with its dependence on impactor size and associated average impact frequency, along with damage estimates in terms of lives and property. Figure 1.1 illustrates the estimated frequency of near-Earth object (NEO)1 impacts on Earth for a range of NEO sizes. For impactor diameters exceeding about 2 to 3 kilometers, worldwide damage is possible, thus affecting all of humanity and its entire living space (the minimum size at which impactors can cause global devastation is still uncertain). While such a collision is exceedingly rare, the consequences are enormous, almost incalculable. This presents the classic “zero times infinity” problem: nearly zero probability of occurrence but nearly infinite devastation per occurrence.

Humanity has the capacity to detect and perhaps to counter such an impending natural disaster. This capacity, and interest in exercising it, have developed and sharply increased in the space age, most likely sparked by the discovery in the late 1980s of the approximately 200-kilometer-diameter Chicxulub Crater formed by an impact 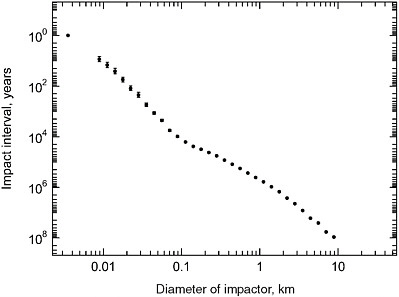 FIGURE 1.1 Current estimates of the average interval in years between collisions with Earth of near-Earth objects of various sizes, from about 3 meters to 9 kilometers in diameter. The uncertainty varies from point to point, but in each case is on the order of a factor of two; there is also a strong correlation of the values from point to point. SOURCE: Courtesy of Alan W. Harris, Space Science Institute.

65 million years ago in the Yucatan Peninsula. The asteroid or comet that caused this crater is estimated to have been about 10 kilometers in diameter; its impact wrought global devastation, likely snuffing out species, including dinosaurs, in huge numbers. Later, in the 1990s, the collision of comet Shoemaker-Levy 9 with Jupiter emphasized that impacts are currently possible.

To assess the current hazards, surveys were undertaken in the 1970s and were greatly augmented in the 1990s in order to discover and track all NEOs to determine the likelihood that one or more would collide with Earth. These surveys, involving relatively small telescopes whose primary mirrors ranged in diameter from 0.6 to 1.2 meters, were seeking objects with diameters greater than 1 kilometer; also detected were many smaller objects that approached Earth closely enough to be seen.2

What is the optimal approach to completing the NEO census called for in the George E. Brown, Jr. Near-Earth Object Survey section of the 2005 NASA Authorization Act[3] to detect,[4] track, catalogue, and characterize the physical

characteristics of at least 90 percent of potentially hazardous NEOs larger than 140 meters in diameter by the end of year 2020? Specific issues to be considered include, but are not limited to, the following:

What is the optimal approach to developing a deflection[5] capability, including options with a significant international component? Issues to be considered include, but are not limited to, the following:

In response to this assignment from Congress, the National Research Council created a steering committee—the Committee to Review Near-Earth Object Surveys and Hazard Mitigation Strategies—and two panels (one for each task: the Survey/Detection Panel and the Mitigation Panel) to undertake a study to address these issues.

Although the possibility of a large NEO impact with Earth is remote, conducting surveys of NEOs and studying means to mitigate collisions with them can best be viewed as a form of insurance. It seems prudent to expend some resources to prepare to counter this collision threat. Most homeowners, for example, carry fire insurance, although no one expects her or his house to burn down anytime soon. The distinction between insurance for the NEO collision hazard and other “natural” hazards, such as earthquakes and hurricanes, is that the possibility of detecting and preventing most serious collisions now exists. In the case of earthquakes, for example, despite extensive efforts, primarily in China, Japan, and the United States, neither the epoch nor the severity of an earthquake can yet be reliably predicted. Governments do nonetheless fund the analog of an insurance policy through studies of this hazard and through the design and construction of earthquake-resistant structures and in development of plans for response and recovery. The goal is to reduce both the number of fatalities and the damage to property from earthquakes. According to figures from the NRC (2006) report Improved Seismic Monitoring—Improved Decision-Making: Assessing the Value of Reduced Uncertainty, the United States alone now spends well in excess of $100 million annually on this suite of earthquake-related efforts. The annual death rate in the United States from earthquakes, averaged over the past two centuries for which data are available, is approximately 20 per year, with 75 percent of that figure attributed to the 1906 San Francisco Earthquake, mostly from related fires. For Japan, both the expenditure and the fatality figures are far larger. China and other parts of Asia have also suffered massive casualties from earthquakes. The September 2009 earthquakes that caused loss of life in Indonesia, Samoa, and American Samoa, and the devastating January 2010 earthquake in Haiti and February 2010 earthquake in Chile, highlight this ongoing threat to human life.

Given the low risk over a period of, say, a decade (see Chapter 2), how much should the United States invest in NEO insurance? This question requires a political, not a scientific, answer. Yet the question bears on the committee’s charge. The committee was asked to recommend the optimal approach for each of the tasks, with the definition of “optimal” left to the committee. A unique characteristic of the “NEO research premiums,” which distinguishes them from the usual types of insurance, is that the premiums would be directed entirely toward the prevention of the catastrophe.

In no case, however, is it wise to consider the application of techniques more than a few decades into the future. The technologies available at that time would likely be both more efficient and more effective, rendering present approaches obsolete. However, it is not wise to wait for those future technologies, leaving Earth unaware and threats to Earth unmitigated in the meantime.

The remainder of this report is devoted to a description of the various aspects of the hazard that the committee has considered, to its findings and recommendations in response to the charge, and to its prioritization of the recommendations in the context of the committee’s somewhat arbitrarily chosen alternative budget levels for funding an NEO program. In particular, Chapter 2 is directed toward clarifying, as well as is now feasible, the risks associated with asteroid and comet hazards and the uncertainties in current knowledge of those risks. These studies of risk include both small and large potential impactors, their various possible orbits, the effects of airburst and ocean impacts, and the key issue of warning time.

Chapter 3 contains the committee’s analysis of the survey and detection questions, including currently mandated goals, their possible modifications, and the possible means—ground- and/or space-based methods—of achieving them.

Chapter 4 addresses characterization, the gathering of information on the properties of asteroids and comets that form the pool of potential impactors. The emphasis is on asteroids and on properties that would importantly affect any attempts at an active defense of Earth against an impending impact. The various properties of relevance are listed and their importance explained. Methods are described for characterization, ranging from laboratory studies of meteorites, through detailed observations of airbursts, to ground- and space-based remote and in situ observations of samples from the pool. This chapter also devotes special attention to the role of radar observations, consistent with the study’s charge, and to the complementary nature of the various means for characterization. A vital issue is the wide variation in the key properties from one object to another.

Chapter 5 addresses mitigation, examining the available techniques and the situations for which each is applicable. The goal is to avoid a collision through changing the orbit of (or destroying) an impactor headed for Earth. The committee also examined the state of (un)readiness of each technique and discussed the developments and tests needed to establish confidence that the countermeasures would work when called on. As to the deployment of any countermeasure, a main guide is the ancient maxim “First, do no harm.” Obedience to this admonition is not so trivial as it might appear. With the years-long warning times likely needed to complete a mitigation mission successfully, the corresponding accuracy of prediction of the impact might well be poor. In particular, the error ellipse that describes the uncertainty in the prediction of impact might well not approach the near-certainty desired, indicating the need for caution.

The committee’s work uncovered many facets of the overall problem that need attention in order to enable the sensible planning and execution of the options that were considered. The committee therefore recommends a research program, discussed in Chapter 6, to address these issues. Included among these topics are airbursts from impactors in the decameter-size range, with various compositions and structures, as well as the current distribution in the sky of objects that could impact Earth over, say, the next century or so. This proposed research program should include peer evaluation of proposals.

The collision hazard posed by cosmic objects is, as noted, global. It therefore seems sensible to deal with this hazard in its international context. Also needed is national leadership and responsibility. Chapter 7 discusses such leadership, noting that the Office of Science and Technology Policy has been tasked with addressing this issue. In Chapter 7, the committee emphasizes international aspects—organization, coordinated activities and responsibilities, and means for settling disputes that might arise in the planning stages and especially from a failed mitigation effort.

Throughout this report, the committee sought to eliminate jargon and acronyms whenever possible, although the nature of the report required some specialized vocabulary. The committee added a Glossary as Appendix E to provide clarity. 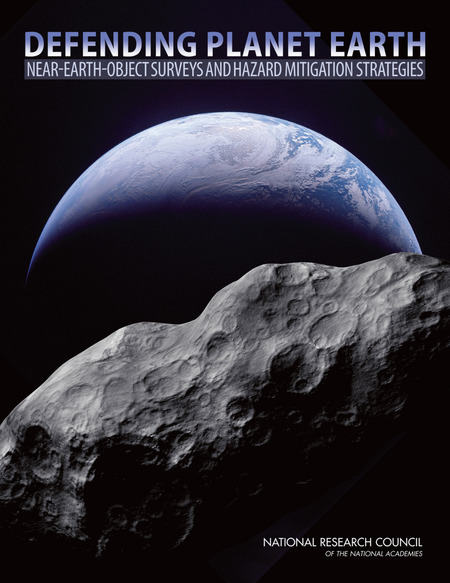 The United States spends approximately $4 million each year searching for near-Earth objects (NEOs). The objective is to detect those that may collide with Earth. The majority of this funding supports the operation of several observatories that scan the sky searching for NEOs. This, however, is insufficient in detecting the majority of NEOs that may present a tangible threat to humanity. A significantly smaller amount of funding supports ways to protect the Earth from such a potential collision or "mitigation."