Get This Book
Visit NAP.edu/10766 to get more information about this book, to buy it in print, or to download it as a free PDF.
Page i Share Cite
Suggested Citation:"Front Matter." National Research Council. 2011. High School Dropout, Graduation, and Completion Rates: Better Data, Better Measures, Better Decisions. Washington, DC: The National Academies Press. doi: 10.17226/13035.
×

Committee for Improved Measurement of High School Dropout and Completion Rates: Expert Guidance on Next Steps for Research and Policy Workshop

This study was supported by Award No. B 8143 between the National Academy of Sciences and the Carnegie Corporation of New York. Any opinions, findings, conclusions, or recommendations expressed in this publication are those of the author(s) and do not necessarily reflect the views of the organizations or agencies that provided support for the project.

Copyright 2011 by the National Academy of Sciences. All rights reserved.

The National Academy of Education advances the highest quality education research and its use in policy formation and practice. Founded in 1965, NAEd consists of U.S. members and foreign associates who are elected on the basis of outstanding scholarship or contributions to education. Since its establishment, NAEd has undertaken commissions and study panels that address pressing issues in education and that typically include both NAEd members and other scholars with an expertise in a particular area of inquiry. In addition, members are deeply engaged in NAEd’s professional development fellowship programs focused on the rigorous preparation of the next generation of scholars.

COMMITTEE FOR IMPROVED MEASUREMENT OF HIGH SCHOOL DROPOUT AND COMPLETION RATES: EXPERT GUIDANCE ON NEXT STEPS FOR RESEARCH AND POLICY WORKSHOP

High school graduation and dropout rates have long been used as a central indicator of education system productivity and effectiveness and of social and economic well-being. Today, interest in the accuracy and usefulness of these statistics is particularly acute because of changing demographics, new legislative mandates, and heightened political pressures to reduce the numbers and rates of dropouts. Despite this strong need for sound and reliable measures of high school dropout and completion rates, there has been widespread disagreement among researchers, statisticians, and policy analysts about the “true” rates, how they are best measured, and what trends are evident over time. At a time when policy makers are vitally interested in tracking the incidence of dropping out of school, they are faced with choosing among substantially discrepant estimates that would lead them to different conclusions regarding both the size of the dropout problem and how it has changed in recent years.

In 2008 the National Research Council (NRC) and the National Academy of Education decided to jointly undertake a project focused on improving understanding of these rates and specifically (1) to explore the strengths, weaknesses, and accuracy of available rates; (2) to gather information on the state of the art with respect to constructing longitudinal student accounting systems for measuring dropout and completion rates; (3) to identify the kinds of analyses that are needed in order to understand changes in the rates; and (4) to consider ways that information on dropout and completion rates can used to improve practice at the local level and public policies at the state and national levels. The project was funded by the Carnegie Corporation. A steering committee

was formed to convene a workshop addressing these topics and to make recommendations about best practices in calculating and reporting dropout and completion rates. The committee members were chosen for their expertise in education research, policy, and administration; education statistics and data systems; school organization; school-leaving processes; and minority education.

The Workshop on Improved Measurement of High School Dropout and Completion Rates: Expert Guidance on Next Steps for Research and Policy was held on October 23 and 24, 2008, in Washington, DC. The workshop agenda and a list of participants are in Appendix A. Biographical sketches of committee members and staff appear in Appendix B. The background papers and workshop transcript are posted on the NRC website at http://www7.nationalacademies.org/bota/High_School_Dropouts_Workshop_Agenda.html.

Many people contributed to the success of this project. The committee first expresses its appreciation to the members of the Research Advisory Committee of the National Academy of Education, chaired by Alan Schoenfeld, University of California, Berkeley. I am grateful to my colleagues on that committee for their leadership and support in bringing this project to fruition, including: Richard Atkinson, University of California; James Banks, University of Washington; Margaret Eisenhart, University of Colorado, Boulder; Michael Feuer, National Research Council; Ellen Lagemann, Bard College; Michael McPherson, Spencer Foundation; Lauren Resnick, University of Pittsburgh; Lorrie Shepard, University of Colorado, Boulder; and Marshall Smith, William and Flora Hewlett Foundation. We also gratefully acknowledge the contributions of Gregory White, executive director, and Andrea Solarz, director of research initiatives, both with the National Academy of Education; both offered many helpful suggestions throughout the course of this project.

The committee also thanks the NRC staff of the Board on Testing and Assessment who worked on this project: Kelly Duncan, senior project assistant,

for her expert skills in organizing the workshop and two committee meetings; Rose Neugroschel, research assistant, for her careful attention to detail in finalizing this manuscript; and director Stuart Elliott, for his contributions in formulating the workshop design and making it a reality. We especially thank Judy Koenig for her intellectual and organizational skills as the study director. And we thank Patricia Morison, associate executive director of the Division of Behavioral and Social Sciences and Education for her support and guidance at key stages in this project.

This report has been reviewed in draft form by individuals chosen for their diverse perspectives and technical expertise, in accordance with procedures approved by the NRC’s Report Review Committee. The purpose of this independent review is to provide candid and critical comments that will assist the institution in making its published report as sound as possible and to ensure that the report meets institutional standards for objectivity, evidence, and responsiveness to the study charge. The review comments and draft manuscript remain confidential to protect the integrity of the deliberative process. We thank the following individuals for their review of this report: Wes Bruce, Department of Education, State of Indiana; Duncan Chaplin, Human Services Research Division, Mathematica Policy Research, Inc.; Alan F. Karr, Director’s Office, National Institute of Statistical Sciences; Ruth Lopez Turley, Department of Sociology, University of Wisconsin, Madison; Samuel R. Lucas, Department of Sociology, University of California, Berkeley; Richard J. Murnane, Graduate School of Education, Harvard University; Stephen W. Raudenbush, Department of Sociology, University of Chicago; and Julian Vasquez Heilig, University Council for Educational Administration, Department of Education Administration, University of Texas, Austin.

Although the reviewers listed above have provided many constructive comments and suggestions, they were not asked to endorse the conclusions or recommendations nor did they see the final draft of the report before its release. The review of this report was overseen by Lorraine McDonnell, University of California, Santa Barbara, and Lawrence D. Brown, Department of Statistics,

Wharton School, University of Pennsylvania. Appointed by the NRC, they were responsible for making certain that an independent examination of this report was carried out in accordance with institutional procedures and that all review comments were carefully considered. Responsibility for the final content of this report rests entirely with the authoring committee and the institution.

Committee for Improved Measurement of High School Dropout and Completion

Rates: Expert Guidance on Next Steps for Research and Policy Workshop 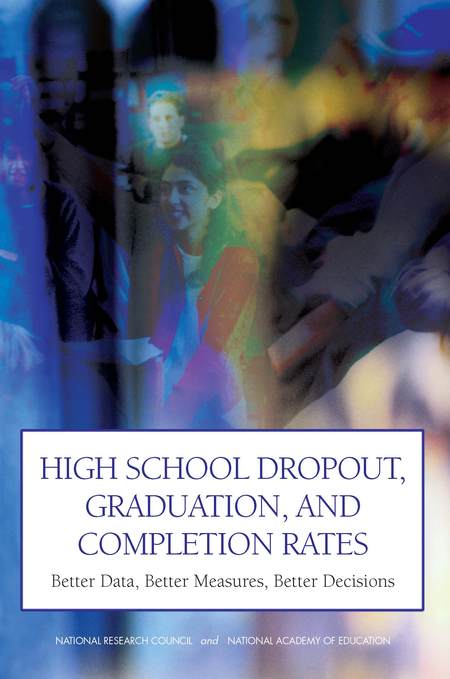 High school graduation and dropout rates have long been used as indicators of educational system productivity and effectiveness and of social and economic well being. While determining these rates may seem like a straightforward task, their calculation is in fact quite complicated. How does one count a student who leaves a regular high school but later completes a GED? How does one count a student who spends most of his/her high school years at one school and then transfers to another? If the student graduates, which school should receive credit? If the student drops out, which school should take responsibility?

High School Dropout, Graduation, and Completion Rates addresses these issues and to examine (1) the strengths, limitations, accuracy, and utility of the available dropout and completion measures; (2) the state of the art with respect to longitudinal data systems; and (3) ways that dropout and completion rates can be used to improve policy and practice.