Get This Book
Visit NAP.edu/10766 to get more information about this book, to buy it in print, or to download it as a free PDF.
« Previous: 4 Impacts of a National Underground Facility
Page 105 Share Cite
Suggested Citation:"Appendixes." National Research Council. 2012. An Assessment of the Science Proposed for the Deep Underground Science and Engineering Laboratory (DUSEL). Washington, DC: The National Academies Press. doi: 10.17226/13204.
×

Next: Appendix A: Statement of Task »
An Assessment of the Science Proposed for the Deep Underground Science and Engineering Laboratory (DUSEL) Get This Book
× 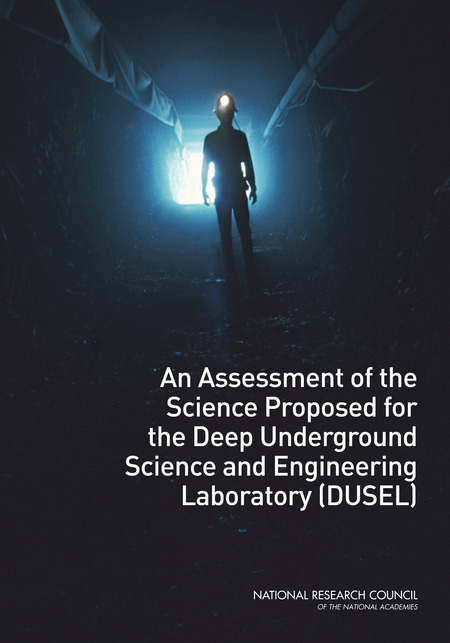 According to the big bang theory, our Universe began in a state of unimaginably high energy and density, contained in a space of subatomic dimensions. At that time, unlike today, the fundamental forces of nature were presumably unified and the particles present were interacting at energies not attainable by present-day accelerators. Underground laboratories provide the conditions to investigate processes involving rare phenomena in matter and to detect the weak effects of highly elusive particles by replicating similar environments to those once harnessed during the earliest states of the Earth. These laboratories now appear to be the gateway to understanding the physics of the grand unification of the forces of nature.

Built to shield extremely sensitive detectors from the noise of their surroundings and the signals associated with cosmic rays, underground facilities have been established during the last 30 years at a number of sites worldwide. To date, the United States' efforts to develop such facilities have been modest and consist primarily of small underground laboratories. However, the U.S. underground community has pushed for larger underground facilities on the scale of major laboratories in other countries. An Assessment of the Deep Underground Science and Engineering Laboratory (DUSEL) addresses this matter by evaluating the major physics questions and experiments that could be explored with the proposed DUSEL. Measuring the potential impact, this assessment also examines the broader effects of the DUSEL in regards to education and public outreach, and evaluates the need associated with developing U.S. programs similar to science programs in other regions of the world.