Visit NAP.edu/10766 to get more information about this book, to buy it in print, or to download it as a free PDF.
Page i Share Cite
Suggested Citation:"Front Matter." National Research Council. 1989. High-School Biology Today and Tomorrow. Washington, DC: The National Academies Press. doi: 10.17226/1328.
×

National Academy Press . 2101 Constitution Avenue, N.W. . Washington, D.C. 20418 NOTICE: The project that is the subject of this report was approved by the Governing Board of the National Research Council, whose members are drawn from the councils of the National Academy of Sciences, the National Academy of Engineering, and the Institute of Medicine. The members of the committee~responsible for the report were chosen for their special competence and with regard for appropriate balance. This report has been reviewed by a group other than the authors according to procedures approved by a Report Review Committee consisting of members of the National Academy of Sciences, the National Academy of Engineering, and the Institute of Medicine. The National Academy of Sciences is a private, nonprofit, self-perpetuating society of distinguished scholars engaged in scientific and engineering research, dedicated to the furtherance of science and technology and to their use for the general welfare. Upon the authority of the charter granted to it by the Congress in 1863, the Academy has a mandate that requires it to advise the federal government on scientific and technical matters. Dr. Frank Press is president of the National Academy of Sciences. The conference High-School Biology: Today and Tomorrow was organized by the Board on Biology of the National Research Council's Commission on Life Sciences. The views in this book are solely those of the individual authors and are not necessarily the views of its sponsors. Support for the publication of these papers was provided by the Howard Hughes Medical Institute, Bethesda, Maryland. Library of Congress Cataloging-in-Publication Data High-school biology: today and tomorrow / Committee on High-School Biology Education, Board on Biology, Commission on Life Sciences, National Research Council. p. cm. Papers from a conference held Oct. 1988, in Washington, D.C. ISBN 0-309-04028-0 1. Biology Study and teaching (Secondary)- Congresses. I. National Research Council (U.S.~. Committee on High-School Biology Education. QH315.H615 574'.071/2-dc20 89-13141 CIP Copyright ~ 1989 by the National Academy of Sciences No part of this book may be reproduced by any mechanical, photographic, or electronic process, or in the form of a phonographic recording, nor may it be stored in a retrieval  system, transmitted, or otherwise copied for public or private use, without written permission from the publisher, except for the purposes of official use by the U.S. government. Cover photos: (top) Photograph by James Sherwood; (bottom) Microphotograph of the alga, Volvox aureus. Courtesy, National Science Teachers Association. Printed in the United States of America

Preface In the spring of 1988, the Board on Biology and its parent body, the Commission on Life Sciences of the National Research Council, initiated a study of the state of high-school biology education. The recognition that things are amiss had been developing for some time, and the legal disputes over the teaching of evolution several years ago had sharpened the Board's sense of the complexity of the problem. The timely and generous financial support of the Howard Hughes Medical Institute allowed this study to begin. The Committee on High-School Biology Education, consisting of sci- entists and educators, is undertaking the study, and its report will be issued soon. One of the committee's first tasks was to organize a conference to provide extensive background information that would inform its delibera- tions. A program committee identified general subjects to be addressed: objectives of biology education and measurement of achievement, cur- riculum perspectives and content, instructional procedures and materials, teacher preparation, institutional barriers, and implementation. Each was examined by a panel of speakers. Each panel was chaired by a committee member, who provided brief opening comments. The goal of the confer- ence, held in October 1988, was so effectively realized that we feel that the papers given should be available to a wider audience; they appear in this volume as given at the conference, lightly edited for consistency of presen- tation. The papers embody the research and opinions of their authors and do not reflect the opinions or judgments of the Committee on High-School Biology Education or the National Research Council. · - V11

· . . V111 PREFACE Invitations to attend the conference were extended to teachers and administrators from across the country, and many teachers traveled consid- erable distance at their own expense to attend. On behalf of the committee, I would like to acknowledge the devotion and professionalism exhibited by that sacrifice. Whatever the failings of our educational system (and, as this volume attests, the failings are many), there is a cadre of dedicated teachers who remain our best hope for change. In organizing the conference, we indicated our wish to hear not only from panelists, but also from the audience. In addition, the audience was invited to submit written comments to the committee for consideration after the conference. By the middle of the first day, it had become clear that insufficient time had been allotted for audience participation, and the ensuing spontaneous and heartfelt demonstration of frustration from many of the teachers in the audience stimulated us to adjust the schedule. Unfortunately, this volume cannot reflect the long and fruitful evening shared by teachers and members of the committee, starting with dinner and not ending for many of us until the following morning. That informal session punctuated dramatically- and in a manner that cannot be conveyed by chapters in a book not only the smothering conditions under which many teachers work, but the dedication and imagination that the very best teachers still manage to bring to their profession. Walter Rosen recruited the speakers according to the objectives out- lined by the program committee. Donna Gerardi, Barbara Christensen, and Linda Jones provided essential planning and logistical support, and Norman Grossblatt and Walter Rosen prepared the papers for publication. Since the conference in October 1988, Evelyn Handler, the committee's original chair, has found it necessary to resign from the committee, and I have replaced her. We all thank her for her early stewardship of the study, which was so well launched with the conference. Timothy H. Goldsmith, Chairman Committee on High-School Biology Education

Next: Part I: Opening Address and Responses »
High-School Biology Today and Tomorrow Get This Book
× 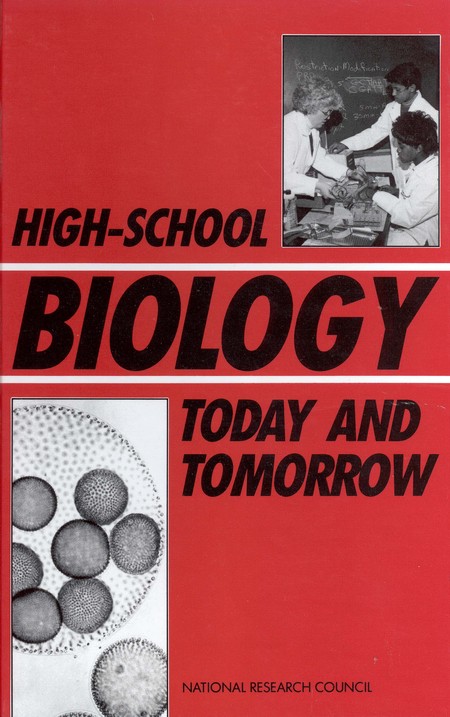 Biology is where many of science's most exciting and relevant advances are taking place. Yet, many students leave school without having learned basic biology principles, and few are excited enough to continue in the sciences. Why is biology education failing? How can reform be accomplished? This book presents information and expert views from curriculum developers, teachers, and others, offering suggestions about major issues in biology education: what should we teach in biology and how should it be taught? How can we measure results? How should teachers be educated and certified? What obstacles are blocking reform?