Get This Book
Visit NAP.edu/10766 to get more information about this book, to buy it in print, or to download it as a free PDF.
Page i Share Cite
Suggested Citation:"Front Matter." National Research Council. 2012. Space Studies Board Annual Report 2011. Washington, DC: The National Academies Press. doi: 10.17226/13329.
×

Support for the work of the Space Studies Board and its committees was provided by National Aeronautics and Space Administration contracts NNH06CE15B, NNH10CC48B, and NNH11CD57B; by National Science Foundation grants AGS-1050550, AST-1050744, and AGS-1106426; and by U.S. Geological Survey grant G11AP20217.

Cover: Artistic rendition of Kepler-35b circumbinary planet. A circumbinary planet has two suns, not just one. The distances between the planet and stars are continually changing due to their orbital motion, so the amount of sunlight the planet receives varies dramatically. Illustration by Lior Taylor, http://www.liordesign.com. See NASA Kepler News, Kepler Discovery Establishes New Class of Planetary System, January 11, 2012, at http://kepler.nasa.gov/news/nasakeplernews/. 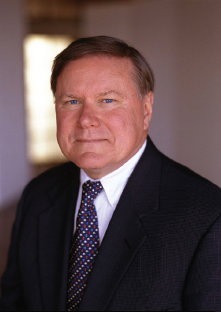 2011 was a challenging year for NASA and for the space science research communities. Last year, I made the following remarks in the introduction to Space Studies Board Annual Report 2010:

Never has there been a more complete assessment of NASA space sciences. Never have so many labored so much and so well on strategies whose chances of realization were more uncertain than now…. [NASA’s] programs are caught in a self-reinforcing budgetary spiral. The profound changes taking place in the human exploration program make it difficult for the agency to set internal priorities, though there is an effort to protect science. The general need to reduce the federal budget deficit makes NASA’s financial outlook uncertain at best and most likely bleak. Finally, NASA’s costs for large programs are inflating with unanticipated speed.

In some ways things have only got more uncertain in 2011. Not all of NASA’s problems are of its making. Many people outside Washington may be able to view with a certain detachment the profound political conflicts paralyzing action and rending human relationships within the Beltway, but the human beings in NASA headquarters cannot. When Congress is in session, there is a palpable change of atmosphere in Washington—a tension in the air—at the best of times, and the aware NASA administrator has to be sensitive to it. To last year’s worries about the overall budgetary trend, 2011 added indecision and disagreement over how to manage the growing national debt.

The science community remains ready to go out of its way to support NASA as it faces the decisions it must make, despite the continuing uncertainty. Yet, there are those who state that there was no point in even asking our community for its advice until the government settled on a basic approach to debt reduction. It has not, and, at the time of writing, there is still no clear sense of what NASA can expect in the years to come.

All this raises important questions about the role of the Space Studies Board. People in and out of NASA are searching for a sense of overall direction for NASA. Some in Congress have turned to the National Research Council (NRC) for help, and, indeed, in 2012 the Space Studies Board will participate in such efforts. We know how important they could be. While the initiation of a study on the long-range goals and direction of the human spaceflight program has taken longer than we in the SSB and the Aeronautics and Space Engineering Board might have anticipated, at the end of 2011 we made progress, and we are hopeful that in the 2012 annual report we can report on the status of that study.

The budgetary turmoil has also raised questions about how the SSB conducted its recent round of decadal surveys. It seems self-evident that the science community should make its recommendations in full awareness of the engineering complexity and cost-risk implications of the projects it recommends. I believe that at some level the science community now embraces this proposition. The question is how to do it. Both the planetary and the astronomy and astrophysics decadal surveys were given budget projections that became invalid during report preparation. The reports’ budget assumptions were out of date at the moment of release. However, their assessments of scientific progress and opportunity still stand. And their recommended missions remain compelling. Moreover, each survey developed its own decision rules to cope with budgetary changes, which NASA decision-makers appreciated. We need to consider how to answer the question, How should future decadals balance the time they spend on defining scientific opportunities with getting budget numbers right?

NASA’s recent experience with the James Webb Space Telescope (JWST) has also made it clear that the biggest flagship missions will have to be treated differently because of their potential to affect programs not only in their own science area but in others and, conceivably, as with JWST, across all of NASA. Does this mean that our disciplinary decadal committees should not expect to get a flagship during their planning decade? If so, how do we choose from their flagship proposals?

2012 is another year. It will start off well because on January 4 John Grunsfeld was named the new associate administrator for the Science Mission Directorate. John has big shoes to fill as he replaces Ed Weiler who, over a more than 30-year career, was one of the most effective science administrators in NASA history. On behalf of the Space Studies Board, and also personally, I would like to thank Ed for a job very well done.

As a former astronaut, John will have the support of the NASA administrator and the human spaceflight side of NASA, and as the astronaut who heroically carried out two Hubble Space Telescope repairs, the respect of the science community. I personally cannot imagine a more insightful choice, and I, and the Space Studies Board, look forward to a productive working relationship.

In November 2012, the SSB will sponsor a workshop in Irvine, California, to examine lessons learned from the present round of decadal assessments, so as to provide guidance for the midterm assessments and prepare for the next round of decadal surveys. The SSB held a similar workshop during the term of my predecessor, Len Fisk, and by all accounts it was considered useful. We are seeking broad community and international participation.

2011 was also a year of transition for the SSB. The NRC and NASA renewed the SSB’s contract for another 5 years. Michael Moloney and Marc Allen worked hard over 18 months to design an agreement that works both for the NRC and NASA. Our standing committees will meet in person at least once a year and more frequently virtually. Most significantly, they will have the ability to suggest and to participate in short-term studies. In Spring 2013, we will have a “Space Science Week in Washington” in which the SSB’s standing committees will conduct their meetings with partial overlap. Government leaders will brief the whole SSB community at once, the committees will exchange views with one another, and there may also be science presentations for the public. Stay tuned.

At year’s end, it is traditional to thank those who have made contributions during the year. As the list of reports published during 2011 attests, our standing and ad hoc committees carried on with important work. This is what will lead our enterprise through complex times. We are grateful to all who volunteered their time, energy, and insight, and to the hard-working SSB staff who turned complicated discussions into readable reports. During the year, Soroosh Sorooshian, Joan Vernikos, and Chick Woodward competed their terms of service on the Board, and Mark Abbott, John Klineberg, Bob Lin, Marcia Rieke, and Cliff Will joined. My thanks go to both outgoing and incoming members, but their true reward is the respect of their colleagues. Also, Michael Moloney has taken a firm grip on the reins as staff director and is engaging the SSB in a broad range of important issues, as the coming years will show.

In closing, I urge that we keep our present travails in perspective. Our decadal surveys each found that their science has never been so effective, so rich in possibility. We have been in, and are still in, a golden age of space research. This was also made clear in the SSB workshop that is summarized in Sharing the Adventure with the Public: The Value and Excitement of “Grand Questions” of Space Science and Exploration, which was printed

in 2011 and features some of the international space science world’s most thoughtful communicators along with leaders of the media—traditional and modern. Together we reviewed the achievements of the past 50 years and shared our visions for the next 50 years. We celebrated the significance of the space enterprise to science and our global civilization.

1     CHARTER AND ORGANIZATION OF THE BOARD

The Origins of the Space Science Board

The Space Studies Board Today

Assuring the Quality of Space Studies Board Reports

2     BOARD AND STANDING COMMITTEES: ACTIVITIES AND MEMBERSHIP

Highlights of Space Studies Board Activities

Committee on Astronomy and Astrophysics

Committee on the Origins and Evolution of Life

Committee on Planetary and Lunar Exploration

Committee on Solar and Space Physics

Decadal Survey on Biological and Physical Sciences in Space

Planetary Protection Standards for Icy Bodies in the Solar System

4     WORKSHOPS, SYMPOSIA, MEETINGS OF EXPERTS, AND OTHER SPECIAL PROJECTS

The Effects of Solar Variability on Earth’s Climate: A Workshop

5.2     Recapturing a Future for Space Exploration: Life and Physical Sciences Research for a New Era

5.3     Report of the Panel on Implementing Recommendations from the New Worlds, New Horizons Decadal Survey

5.4     Sharing the Adventure with the Public—The Value and Excitement of “Grand Questions” of Space Science and Exploration

Next: 1 Charter and Organization of the Board »
Space Studies Board Annual Report 2011 Get This Book
× 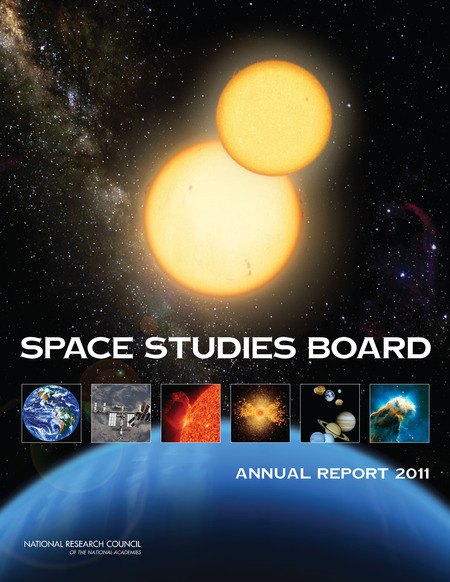 The original charter of the Space Science Board was established in June 1958, 3 months before the National Aeronautics and Space Administration (NASA) opened its doors. The Space Science Board and its successor, the Space Studies Board (SSB), have provided expert external and independent scientific and programmatic advice to NASA on a continuous basis from NASA's inception until the present. The SSB has also provided such advice to other executive branch agencies, including the National Oceanic and Atmospheric Administration (NOAA), the National Science Foundation (NSF), the U.S. Geological Survey (USGS), the Department of Defense, as well as to Congress.

Space Studies Board Annual Report 2011 covers a message from the chair of the SSB, Charles F. Kennel, where he expresses that 2011 was a challenging and uncertain year for NASA and the space science research communities. This report also explains the origins of the Space Science Board, how the Space Studies Board functions today, the SSB's collaboration with other National Research Council units, assures the quality of the SSB reports, acknowledges the audience and sponsors, and expresses the necessity to enhance the outreach and improve dissemination of SSB reports.

This report will be relevant to a full range of government audiences in civilian space research - including NASA, NSF, NOAA, USGS, and the Department of Energy, as well members of the SSB, policy makers, and researchers.