Get This Book
Visit NAP.edu/10766 to get more information about this book, to buy it in print, or to download it as a free PDF.
« Previous: GEORGE BUGLIARELO
Page 46 Share Cite
Suggested Citation:"MOUSTAFA T. CHAHINE." National Academy of Engineering. 2012. Memorial Tributes: Volume 16. Washington, DC: The National Academies Press. doi: 10.17226/13338.
× 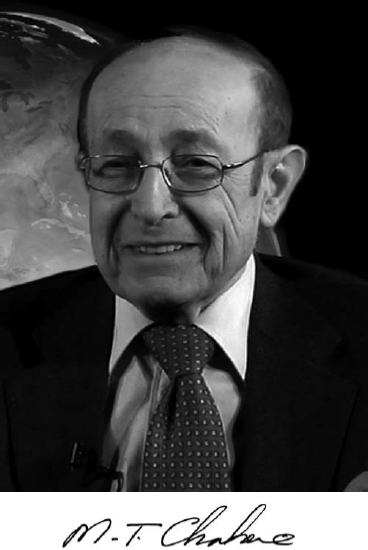 “For leadership in determining the structure and composition of
the Earth’s atmosphere from space observations.”

MOUSTAFA T. CHAHINE, a senior research scientist at the Jet Propulsion Laboratory (JPL) of the National Aeronautics and Space Administration (NASA) at the California Institute of Technology (Caltech) and an international leader in atmospheric remote sensing from satellite observations, died on March 23, 2011, at the age of 76.

Affectionately known as Mous to hundreds of friends and colleagues, Moustafa was born in Beirut, Lebanon, on January 1, 1935. After growing up in Lebanon, he moved to the United States in December 1954 and proceeded to power through his academic studies at the University of Washington, Seattle. He received a bachelor of science degree in aeronautical engineering in 1956 and a master of science degree in aeronautical engineering in 1957. He then entered the University of California at Berkeley as a doctoral candidate and received his Ph.D. degree in mechanical engineering in 1960. His studies centered largely on fluid physics.

It was while in graduate school in 1957 that Mous saw a photograph of JPL Director William Pickering with Wernher von Braun and James Van Allen, holding aloft a model of the just-launched Explorer 1 satellite, the story of which stirred his interest sufficiently that he resolved that he too would work in the space program. Three years later, after graduation,

Mous began his 51-year career at JPL, initially examining the shock waves anticipated as a space capsule reentered Earth’s atmosphere. Soon, he was examining other aspects of the atmosphere and working on methods to derive atmospheric information from the radiation received by satellite-based instrumentation.

Among Mous’s heralded scientific and engineering accomplishments were his development in the late 1960s of an exact mathematical method for the inverse solution of the radiative transfer equation and his applications of that method to deriving atmospheric temperature and water vapor profiles. This “Relaxation Method” was subsequently widely used for obtaining satellite-based profiles of atmospheric temperature and composition not just for Earth’s atmosphere but also for the atmospheres of Venus, Mars, and Jupiter. Later, in the 1970s, Mous formulated a multispectral approach to remote sensing in the presence of clouds, incorporating both infrared and microwave data. In 1980, Mous and others used his equations to generate the first satellite-based global distribution of Earth’s surface temperature, using data from the High Resolution Infrared Radiation Sounder and the Microwave Sounding Unit. Many additional uses followed.

By this time Mous had proposed what was to become the Atmospheric Infrared Sounder (AIRS), a remarkable satellite instrument that was to dominate much of the next 30 years of his scientific and engineering career. He received his initial funding for AIRS in 1978, and he continued to develop and advocate the concept over the succeeding years. As NASA formulated plans for its multidecadal Earth Observing System (EOS), Mous was intimately involved as a member of NASA’s Earth System Sciences Committee. The proposed AIRS instrument received broad-based support because of its potential applications for both weather forecasting and climate change research. Consequently, it was selected in 1988 to be one of the primary Earth-observing instruments on the Aqua satellite (originally known as EOS PM). Mous was selected as the first AIRS science team leader and remained in that position until his death over 20 years later.

Under Mous’s leadership, the AIRS instrument was built in the 1990s to exacting standards, with a temperature-controlled 2,378-channel infrared grating spectrometer and a 4-channel visible/near-infrared photometer. Algorithms were developed to derive from the radiative data a suite of atmospheric and Earth surface variables. AIRS was launched on the Aqua satellite on May 4, 2002, and it quickly became the world’s premier atmospheric sounder, providing well-calibrated global data every 1 to 2 days, with a spatial resolution of 13.5 kilometers at nadir for the infrared channels and 2.3 kilometers at nadir for the visible/near-infrared channels.

The AIRS data have been widely used by both the research and the operational communities. As foreseen years earlier by Mous, incorporation of AIRS data into weather forecast models measurably increased forecast skill, and Mous delighted in the many positive comments made by forecast experts and governmental leaders. The administrator of the National Oceanic and Atmospheric Administration, Vice Admiral Conrad Lautenbacher, said the following about the impact of the AIRS data: “The AIRS instrument has provided the most significant increase in forecast improvement in this time range of any other single instrument.” The AIRS data have also been of practical value to the aviation field, by monitoring volcanic emissions.

One of the major research advances made with AIRS data was Mous’s derivation of atmospheric carbon dioxide (CO2) amounts in the midtroposphere. He did this through a “Vanishing Partial Derivatives” method that he developed for determining trace gas concentrations. His initial results provided the first satellite-derived global map of atmospheric CO2. Once several years of data were obtained and animated, Mous’s CO2 results gave a striking display of the global distribution of both the seasonal cycle and the long-term upward trend in atmospheric CO2. As such, these results became popular fixtures in scientific presentations and were presented to policymakers and popular media outlets and in peer-reviewed scientific publications. AIRS data also were used to create the first global maps of upper-tropospheric

water vapor, soon after the 2002 Aqua launch, and a continuing data set of upper-tropospheric water vapor derived from the AIRS data has been available ever since.

In addition to being a prominent NASA and Caltech researcher throughout his 51-year JPL career, Mous served in important managerial positions. He headed JPL’s Planetary Atmospheres Section from 1975 to 1978 and then founded the Division of Earth and Space Sciences, which he headed from 1978 to 1984, leading its approximately 400 researchers. Afterward, he served as JPL’s chief scientist from 1984 to 2001. Mous was also the first chair of the Science Steering Group of the World Meteorological Organization’s Global Energy and Water Cycle Experiment (GEWEX), serving in that role from 1989 to 1999. During that time the steering group defined the goals and objectives of GEWEX and established connections with the international earth sciences community, helping bring together satellite-based data collection and climate modeling.

Throughout his career, Mous’s excellence was rewarded with notable honors. He received NASA’s Medal for Exceptional Scientific Achievement in 1969, NASA’s Outstanding Leadership Medal in 1984, the William T. Pecora Award from NASA and the U.S. Department of the Interior in 1989, the Jule G. Charney Award from the American Meteorological Society in 1991, the Losey Atmospheric Sciences Award from the American Institute of Aeronautics and Astronautics in 1993, the William Nordberg Medal from the Committee on Space Research in 2002, NASA’s Medal for Exceptional Scientific Achievement in 2007, and the George W. Goddard Award from the International Society for Optics and Photonics in 2010. The latter award was given specifically for Mous’s “exceptional achievement in optical science and instrumentation for aerospace and atmospheric research.” Mous was a fellow of the American Physical Society, the American Meteorological Society, the British Meteorological Society, the American Geophysical Union, and the American Association for the Advancement of Science. He was elected a member of the National Academy of Engineering in 2009 and was also a member of both the International Academy of Astronautics and the Society of Sigma Xi.

One of the highlights of Mous’s career came in 2005, when he was among 15 invited international participants speaking in Vatican City at the Pontifical Academy of Sciences, Working Group on Water and the Environment. The purpose of the meeting was to address important issues surrounding hydrology, the environment, and sustainable development.

Moustafa Chahine was a uniquely tolerant, understanding, and generous person who had numerous lasting impacts on a personal level as well as through his many research accomplishments, the latter well documented in his dozens of peer-reviewed research publications. He radiated enthusiasm for science and engineering and delighted in mentoring and encouraging others and in teaching students and the public about the value of satellite observations. He was also generous in his advice and ideas about numerous other aspects of life. He was well rounded in his knowledge of the world, loved all types of music, and could read, write, and speak three languages with amazing fluency.

One might read about Mous’s professional accomplishments and conclude that his work must have come first, but anyone concluding that would be badly mistaken. Those very close to him knew that for Mous there was no question that family came first. He was the compass and anchor for his wife, Marina, in their 53-year journey together, and as a father he led by quiet example, always placing his sons, Tony and Steve, as his top priority.

Mous was a vital part of NASA, JPL, and Caltech for over 50 years and of his family for even longer. His presence is sorely missed throughout the earth sciences community and by his family and many friends. His death, from a heart attack several hours after what had seemed to be successful hernia surgery, was a devastating loss for all those who knew him well. In the words of his sons, Mous’s “astonishing balance between work and family, art and science, reason and passion is what makes his passing such an indescribable loss for us all.” Moustafa T. Chahine is survived by his wife Marina, his sons Tony and Steve, his brother Najib, and his sisters Salma and Haifa.

Next: JOHN W. COLTMAN »
Memorial Tributes: Volume 16 Get This Book
× 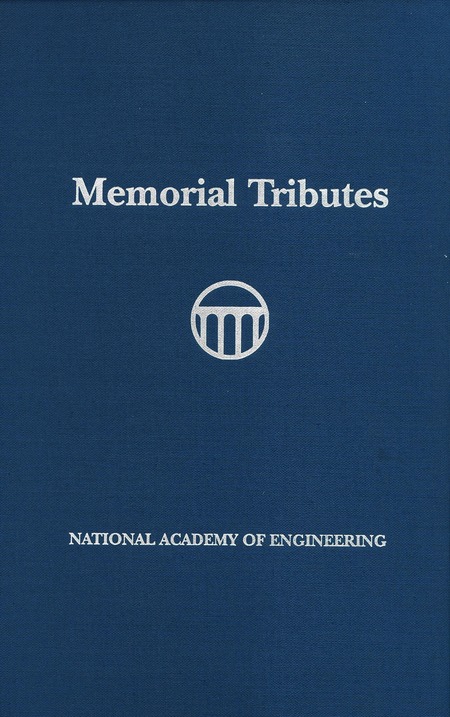 This is the 16th Volume in the series Memorial Tributes compiled by the National Academy of Engineering as a personal remembrance of the lives and outstanding achievements of its members and foreign associates. These volumes are intended to stand as an enduring record of the many contributions of engineers and engineering to the benefit of humankind. In most cases, the authors of the tributes are contemporaries or colleagues who had personal knowledge of the interests and the engineering accomplishments of the deceased. Through its members and foreign associates, the Academy carries out the responsibilities for which it was established in 1964.