The Field of Solar Physics: Review and Recommendations for Ground-Based Solar Research (1989)

Visit NAP.edu/10766 to get more information about this book, to buy it in print, or to download it as a free PDF.
Page i Share Cite
Suggested Citation:"Front Matter." National Research Council. 1989. The Field of Solar Physics: Review and Recommendations for Ground-Based Solar Research. Washington, DC: The National Academies Press. doi: 10.17226/1425.
×

Preface Solar physics stands in a privileged position at the crossroad be- tween laborato~y-oriented experimental and theoretical physics and ob- servationally oriented astrophysics. Many of the basic physical processes thought to be relevant to the workings of astrophysical systems- including nuclear energy sources, particle acceleration, production and excitation of highly charged atoms, and magnetic field generation, dissipation, and reconnection as well as the tools for studying these processes were stud- ied and developed in the solar context before they were applied to other problems in astrophysics. Indeed, the history of astrophysics over the past several decades is replete with examples of the application of both instrumental designs and theoretical precepts transferred from the solar domain to more general astrophysical problems. Because physical conditions in the Sun's outer lay- ers, which reach temperatures of up to 40 million K, are not unlike those encountered in laboratory studies of confined plasmas, the experimental and theoretical developments in solar physics have found immediate appli- cation in terrestrial laboratories as well. Thus the study of solar plasmas dates from the very beginnings of plasma diagnostics as a distinct discipline. Study of the Fraunhofer (discrete absorption line) solar spectrum, involv- ing such great pioneers of atomic spectroscopy as G. R. Kirchhoff (who identified the sodium D lines in the solar spectrum), and application of the (then novel) atomic line Zeeman splitting in studies of sunspot magnetic fields led to the key realization that spectroscopy could be used to probe the physical condition of gases far removed from direct inspection. This opened up the possibility of studying detailed physical processes in other- wise inaccessible astronomical objects and laid the groundwork for much of today's astrophysics and laboratory plasma physics. v

This report's aim is to consider the status of solar science today. Constituted by the National Research Council's Commission on Physical Sciences, Mathematics, and Resources at the behest of the National Science Foundation (NSF), the Committee on Solar Physics focused on those aspects of solar science that fall under the purview of the NSF. The specific charges for this committee were as follows: 1. A review of the present vitality, quality, and directions of solar research, starting with a number of existing studies as points of departure. 2. A determination of present and future needs of the solar commu- nity for ground-based observational facilities and instrumentation and for related analysis and theory, with emphasis on those aspects of the needs that are of relevance to NSF, and a determination of priorities. 3. An identification of possible institutional changes to help accom- plish the program the committee will recommend over the long term, i.e., changes that might be effected to make it possible for scientists to do their research. Given these charges, this committee focused on those organizational aspects of solar science that involve primarily ground-based observations. However, because of the closely knit interactions between ground-based and space-based solar science, some commentary on possible ways to optimize these interactions and to improve the general health of solar science seemed to the committee both unavoidable and perfectly appropriate. Chapter 1 is a summary of the committee's principal findings and recommendations. Chapter 2 provides a science overview of solar research today. Chapter 3 focuses on the principal science opportunities and initia- tives in the four research areas currently at the forefront of solar physics: (1) probing the solar interior, (2) the physics at small spatial scales, (3) mechanisms underlying the solar cycle, and (4) the physics of transients. A discussion of institutional issues in solar physics leading to the committee's recommendations is presented in Chapter 4. Robert Rosner Chairman Committee on Solar Physics V1

Next: 1. Principal Findings »
The Field of Solar Physics: Review and Recommendations for Ground-Based Solar Research Get This Book
× 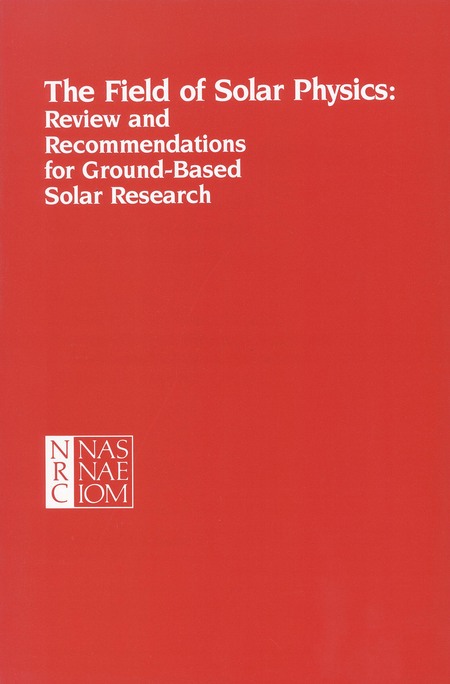 Exciting new observational and theoretical advances lead today's solar physicists to challenge many of the predictions of even recent models. This volume summarizes the major questions at the forefront of solar physics theory and observations, and proposes priority recommendations to explore these questions. The study also addresses serious institutional issues that have beset solar physics including the role of the universities in the national solar observations, structural barriers to careers in solar physics, and the leadership role of the federal funding agencies for ground-based solar research.