Europe 1992: The Implications of Market Integration for R & D-Intensive Firms (1991)

Visit NAP.edu/10766 to get more information about this book, to buy it in print, or to download it as a free PDF.
Page i Share Cite
Suggested Citation:"Front Matter." National Research Council. 1991. Europe 1992: The Implications of Market Integration for R & D-Intensive Firms. Washington, DC: The National Academies Press. doi: 10.17226/1775.
×

ACADEMY INDUSTRY PROGRAM STEPHEN A. MERRILL, Director LOIS PERROLLE, Associate Director SHIRLEY E. COLE, Administrative Assistant The Academy Industry Program was established in 1983 to enhance communication between the National Research Council and industry on issues related to science and technology. It serves as a two-way channel of communication by disseminating the work of the National Research Coun- cil to industry and by providing a forum in which business leaders can bring their views on important issues in science, technology, and health to the attention of the Research Council's leadership. The program also provides support for institutionally initiated studies for which government funding may be inappropriate or unavailable. . . . Liz

Preface The economic and political relationships among the West European countries are in the process of dramatic transformation. The 12 member nations of the European Economic Community are engaged in a bold effort to overcome the enormous historical, cultural, and political barriers that have separated their economies over many centuries, with the aim of creating a Single European Market by the end of 1992. Proponents of the plan, which will create the largest integrated market in the world, argue that it will benefit businesses by allowing economies of scale, more efficient marketing, and increased demand for goods and services from outside the European Community. In non-EC countries such as the United States, however, there is some concern that the Single European Market may serve to exclude or limit the participation of non-European competition. Undoubtedly, the changes brought about by the European market integra- tion will have a major impact on U.S. industry. Regulations and policies adopted in Brussels by the Commission of the European Communities can influence the transfer of information and technology across borders and can affect the market position of both large multinational corporations and smaller, high-tech companies. The impact is likely to be particularly pronounced in industries with heavy involvement in research and development. U.S. R&D- intensive companies have major concerns, for example, about the policies that the EC may establish or has already promulgatedregarding technical standards, intellectual property rights, and access to (and possible participation in) the results of EC-supported basic research, to name only a few. Because these issues are also directly relevant to the work of the National Research Council, the Academy Industry Program, the NRC's principal channel of communication with industry, decided in 1989 to convene a major inter- national symposium on the subject. The AIP turned to the NRC's Office of . . V11

. . . Vlll PREFACE International Affairs to organize the event, which was held on March 5-6, 1990, at the National Academy of Sciences in Washington, D.C. The Office of International Affairs consulted closely with representatives of EC member countries and the CEC in organizing the sessions and inviting speakers. (The agenda for the event is included as Appendix A.) The audience for the symposium included industry members of the AIP, other interested industry representatives, officials of the U.S. and foreign governments, and academic experts. This report is a transcript of the speakers' remarks and of the question- and-answer sessions. It also includes as Appendix B a paper prepared by Patrice Zechman as background reading for symposium participants. The AIP wishes to express its appreciation to Mitchel B. Wallerstein and Patrice Zechman of the NRC's Office of International Affairs and Louis Blair, a consultant, for their extensive efforts in the planning and execution of this symposium.

Next: Introduction »
Europe 1992: The Implications of Market Integration for R & D-Intensive Firms Get This Book
× 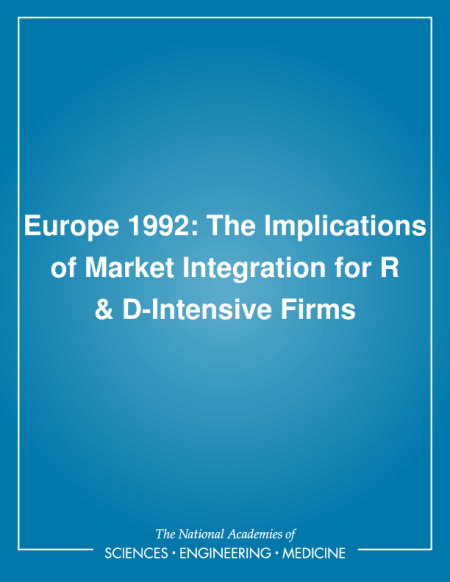 The 12 member nations of the European Economic Community (EC) are engaged in a bold effort to create a Single European Market by the end of 1992. The changes brought about by European market integration will have a major impact on U.S. industry.

Although proponents of the plan argue that it will benefit businesses by allowing economies of scale, more efficient marketing, and increased demands for goods and services from outside the Community, there is some concern that the Single European Market may serve to exclude or limit participation of non-European competition. The impact is likely to be particularly pronounced in industries with heavy involvement in research and development.

This volume is based on a major two-day symposium which brought together officials of United States and other governments, industry representatives, and academic experts to examine EC policies on technical standards, intellectual property rights, access to the results of EC-supported basic research, and other issues affecting R&D intensive firms.