Visit NAP.edu/10766 to get more information about this book, to buy it in print, or to download it as a free PDF.
Page i Share Cite
Suggested Citation:"Front Matter." Transportation Research Board and National Research Council. 2013. Overcoming Barriers to Electric-Vehicle Deployment: Interim Report. Washington, DC: The National Academies Press. doi: 10.17226/18320.
×

THE NATIONAL ACADEMIES PRESS 500 FIFTH STREET, NW WASHINGTON, DC 20001 NOTICE: The project that is the subject of this report was approved by the Governing Board of the National Research Council, whose members are drawn from the councils of the National Academy of Sciences, the National Academy of Engineering, and the Institute of Medicine. The members of the committee responsible for the report were chosen for their special competences and with regard for appropriate balance. This project was supported by Contract DE-EE0004436 between the National Academy of Sciences and the U.S. Department of Energy. Any opinions, findings, conclusions, or recommendations expressed in this publication are those of the authors and do not necessarily reflect the view of the organizations or agencies that provided support for this project. International Standard Book Number-13: 978-0-309-28448-6 International Standard Book Number-10: 0-309-28448-1 Copies of this report are available Additional copies of this report are available in limited supply, free of charge, from: for sale from: Board on Energy and Environmental Systems The National Academies Press National Research Council 500 Fifth Street, NW 500 Fifth Street, NW Keck 360 Keck W934 Washington, DC 20001 Washington, DC 20001 (800) 624-6242 or (202) 334-3313 (202) 334-3344 http://www.nap.edu Copyright 2013 by the National Academy of Sciences. All rights reserved. Printed in the United States of America.

Preface Electric vehicles hold many promisesâfrom reducing dependence on imported petroleum to decreasing greenhouse-gas emissions. However, there are many barriers to their mainstream adoption regardless of incentives and enticing promises to solve difficult problems. The vehicles have some technologic limitations, such as restricted electric range and the long time required for battery-charging; they cost more than conventional vehicles; and they require an infrastructure for charging the battery. Given the concerns regarding barriers, Congress asked the Department of Energy to commission a study by the National Research Council (NRC) to investigate the barriers and recommend ways to mitigate them. In this short interim report, the Committee on Overcoming Barriers to Electric-Vehicle Deployment identifies infrastructure needs for electric vehicles, the barriers to deploying that infrastructure, and optional roles for the federal government in overcoming the barriers; it also presents an initial discussion of pros and cons of the optional roles. The committee first addresses needs and barriers associated with the adoption of plug-in electric vehicles from the customer perspective. It then discusses the needs for and barriers to charging and the electric grid. Those issues and many others will be developed further in the committeeâs final comprehensive report, which is due in late summer 2014. The present report has been reviewed in draft form by persons chosen for their diverse perspectives and technical expertise in accordance with procedures approved by the NRC Report Review Committee. The purpose of the independent review is to provide candid and critical comments that will assist the institution in making its published report as sound as possible and to ensure that the report meets institutional standards of objectivity, evidence, and responsiveness to the study charge. The review comments and draft manuscript remain confidential to protect the integrity of the deliberative process. We thank the following for their review of this report: Andrew Brown, Jr., NAE, 1 Delphi Corporation, Lawrence D. Burns, NAE, University of Michigan, Doug Chapin, NAE, MPR Associates, Mary English, University of Tennessee, Knoxville, Robert Graham, Southern California Edison, David L. Greene, Oak Ridge National Laboratory, Chris T. Hendrickson, NAE, Carnegie Mellon University, Jeremy J. Michalek, Carnegie Mellon University, John OâDell, Edmunds.com, and Dan Reicher, Stanford University. Although the reviewers listed above have provided many constructive comments and suggestions, they were not asked to endorse the conclusions or recommendations, nor did they see the final draft of the report before its release. The review of the report was overseen by the review coordinator, Maxine Savitz, NAE, Honeywell Inc. (retired), and the review monitor, Elisabeth Drake, NAE, Massachusetts Institute of Technology (retired). Appointed by NRC, they were responsible for making certain that an independent examination of the report was carried out in accordance with institutional procedures and that all review comments were carefully considered. Responsibility for the final content of the report rests entirely with 1 National Academy of Engineering. ix

Contents SUMMARY 1 1 INTRODUCTION 7 Historical and Policy Context, 7 The Plug-in Electric Vehicle and Its Ecosystem, 8 Possible Advantages and Disadvantages of Adoption of Plug-in Electric Vehicles, 11 The Committee and Its Task, 12 The Committeeâs Approach to Its Task, 12 Organization of This Report, 12 References, 13 2 THE CUSTOMERS, MANUFACTURERS, AND DEALERS 15 Customer Needs and Barriers, 15 Optional Roles of the Federal Government in Addressing Customer Needs and Barriers, 20 The Automobile Manufacturer, 22 Dealerships and Retail Outlets, 22 References, 24 3 THE CHARGING INFRASTRUCTURE 27 Charging and How It Works, 27 Charging Levels, 30 Charging Locations: Needs, Barriers, and Options, 33 Fleets, 41 Shared-Use Vehicles, 42 Findings and Possible Government Roles in the Charging Infrastructure, 43 References, 46 4 THE ELECTRIC GRID 49 The Electric Grid and Its Interaction with Plug-in Electric Vehicles, 49 Utility Policies that Potentially Affect Adoption of Plug-in Electric Vehicles, 50 Clean Energy, the Electric Grid, and Possible Roles of the Federal Government, 53 Local Electrical Code Requirements, 54 Findings on the Electric Grid, 54 References, 55 APPENDIXES A Committee Biographical Information 57 B Statement of Task 62 C Meetings and Presentations 64 D Technical Specifications 66 xi

Boxes, Figures, and Tables BOXES 4-1 Demand charges, 51 FIGURES 1-1 Plug-in electric vehicle (PEV) sales from December 2010 to March 2013, 9 1-2 The ecosystem of the plug-in electric vehicle, which includes the automobile manufacturer, the car dealer, the customer, the owner, the electric vehicle, the charger, and the electricity system, 10 2-1 Distribution of daily travel distance, 19 3-1 AC Level 1 charging information, 31 3-2 AC Level 2 charging information, 32 3-3 DC fast charging a Nissan Leaf, 33 3-4 The charging pyramid represents the relative importance of residential, workplace, and publicly accessible charging, 34 3-5 Distribution of vehicle locations throughout the week on the basis of data from the 2001 National Household Travel Survey, 35 4-1 Basic diagram of the electric power delivery system, 50 4-2 Aggregate electricity demand from plug-in electric vehicles in (a) San Francisco, California, and (b) Nashville, Tennessee, 52 D-1 The standard connector used for AC Level 1 and Level 2 charging (the J1772 standard of SAE International) allows most plug-in electric vehicles to be charged with chargers built by various manufacturers, 66 D-2 The CHAdeMO plug for DC fast charging is used for most DC fast chargers in the United States, Europe, and Japan and is available on most battery electric vehicles that can accept DC fast charging, 66 D-3 Standard proposed as an alternative to the CHAdeMO connector includes the current plug and socket for AC Level 1 and 2 charging as the upper connector and two lower connectors added for DC fast charging, 67 D-4 The Tesla proprietary plug for DC fast charging that is used for all Tesla DC fast chargers (Superchargers) now available in the United States, 67 D-5 Society of Automotive Engineers charging configurations and ratings terminology, 68 TABLES 3-1 Battery Capacities and All-Electric Ranges for Several Plug-in Electric Vehicles, 28 3-2 Average Costs of Installing Publicly Accessible DC Fast-Charging Stations for the West Coast Electric Highway Project, 39 xii

Next: Summary »
Overcoming Barriers to Electric-Vehicle Deployment: Interim Report Get This Book
× 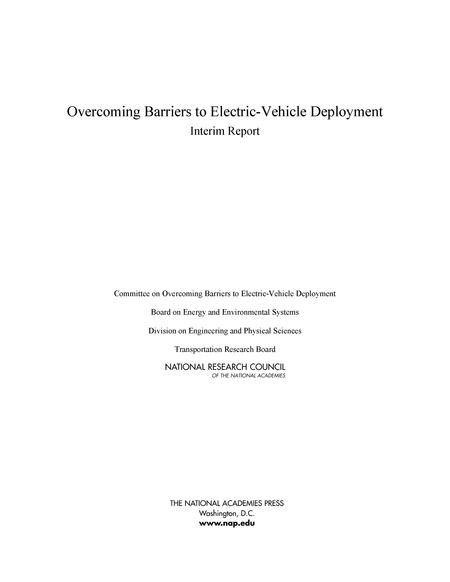 The electric vehicle offers many promises—increasing U.S. energy security by reducing petroleum dependence, contributing to climate-change initiatives by decreasing greenhouse gas (GHG) emissions, stimulating long-term economic growth through the development of new technologies and industries, and improving public health by improving local air quality. There are, however, substantial technical, social, and economic barriers to widespread adoption of electric vehicles, including vehicle cost, small driving range, long charging times, and the need for a charging infrastructure. In addition, people are unfamiliar with electric vehicles, are uncertain about their costs and benefits, and have diverse needs that current electric vehicles might not meet. Although a person might derive some personal benefits from ownership, the costs of achieving the social benefits, such as reduced GHG emissions, are borne largely by the people who purchase the vehicles. Given the recognized barriers to electric-vehicle adoption, Congress asked the Department of Energy (DOE) to commission a study by the National Academies to address market barriers that are slowing the purchase of electric vehicles and hindering the deployment of supporting infrastructure. As a result of the request, the National Research Council (NRC)—a part of the National Academies—appointed the Committee on Overcoming Barriers to Electric-Vehicle Deployment.

This committee documented their findings in two reports—a short interim report focused on near-term options, and a final comprehensive report. Overcoming Barriers to Electric-Vehicle Deployment fulfills the request for the short interim report that addresses specifically the following issues: infrastructure needs for electric vehicles, barriers to deploying the infrastructure, and possible roles of the federal government in overcoming the barriers. This report also includes an initial discussion of the pros and cons of the possible roles. This interim report does not address the committee's full statement of task and does not offer any recommendations because the committee is still in its early stages of data-gathering. The committee will continue to gather and review information and conduct analyses through late spring 2014 and will issue its final report in late summer 2014.

Overcoming Barriers to Electric-Vehicle Deployment focuses on the light-duty vehicle sector in the United States and restricts its discussion of electric vehicles to plug-in electric vehicles (PEVs), which include battery electric vehicles (BEVs) and plug-in hybrid electric vehicles (PHEVs). The common feature of these vehicles is that their batteries are charged by being plugged into the electric grid. BEVs differ from PHEVs because they operate solely on electricity stored in a battery (that is, there is no other power source); PHEVs have internal combustion engines that can supplement the electric power train. Although this report considers PEVs generally, the committee recognizes that there are fundamental differences between PHEVs and BEVs.