Visit NAP.edu/10766 to get more information about this book, to buy it in print, or to download it as a free PDF.
Page i Share Cite
Suggested Citation:"Front Matter." National Academy of Sciences and National Academy of Engineering. 1988. Siting the Superconducting Super Collider. Washington, DC: The National Academies Press. doi: 10.17226/18540.
×

Preface The National Academy of Sciences (NAS) and National Academy of Engineering (NAE) were asked by the Department of Energy (DOE) to undertake, on an exceptionally tight schedule, the mon- umental task of assisting the department in selecting a site for the proposed Superconducting Super Collider (SSC). A committee was appointed by the academies, and according to several news stories, about 750 pounds of proposals were sent to each committee volun- teer. Although we have not, ourselves, weighed the proposals, we can verify the reasonableness of that estimate. The Super Collider Site Evaluation Committee was charged with developing guiding principles for evaluating proposed sites, consider- ing the relative advantages and disadvantages of various sites referred to it by DOE, and identifying an unranked list of best-qualified sites, giving particular attention to the technical requirements and such other factorsâknown in light of past experience with large science research laboratoriesâas would assure scientific productivity. The final selection of a site remains to be made by DOE, not by the academies, and will, of course, depend on considerations of concern to DOE, some of which may lie outside the areas of expertise repre- sented by the academies. It is important to keep in mind that the academies were asked to advise on desirable locationsâthose particularly promising for scientific productivityâfor an SSC; they were not asked to evaluate

the scientific feasibility, opportunities, or need for an SSC. It was, however, important for the committee to understand the nature of the SSC and the scientific expectations of the high-energy physics community in order to evaluate effectively what site-specific factors were likely to be important for efficient construction and scientifically productive operation of such a facility. I am pleased to acknowledge the substantial contributions of many individuals, agencies, and organizations to this important effort and, on behalf of the academies, to thank them. First and foremost, I am indebted to the committee's volunteer members. Together we are grateful to our dedicated staff for their effective efforts in collect- ing and analyzing data, preparing drafts, and generally facilitating our work. Without their brilliant support, we could scarcely have completed this awesome assignment on schedule. We are indebted to the U.S. Army Corps of Engineers for helping to analyze the strengths and weaknesses of the proposals in regard to real estate title and costs. We appreciate the assistance provided by special staff consultants, Jerry Okeson and Richard C. Armstrong, to committee members Edward Jefferson and LTG E.R. Heiberg, respectively, and the contributions of Don Deere, Jr., and James Gamble, who helped analyze the geology and tunneling aspects of the proposals. DOE staff graciously provided the information and resources we requested. We appreciate the information and thoughtful comments provided by a number of colleagues who participated in subgroup meetings. Val Fitch, of Princeton University, offered a useful perspective on the site selection task at the committee's first meeting. Dan Lehman and Robert Selby, of DOE, and Tom Elioff and Mack Riddle, of RTK Associates, contributed to the July meeting of our Costs subgroup. Similarly, the August meeting of our Regional Resources subgroup benefited greatly from insights provided by Leon Lederman of the Fermi National Accelerator Laboratory, Wolfgang Panofsky of the Stanford Linear Accelerator Center, Louis Rosen of the Los Alamos Meson Physics Facility, Samuel Ting of Massachusetts Institute of Technology, and Paul van den Bout of the National Radio Astronomy Observatory, Socorro, New Mexico. Finally, my colleagues and I want to recognize the effort expended by those who prepared the proposals we evaluated and the high quality of the result of that effort. Although we were charged with identifying a short list of best-qualified sites, manyâindeed mostâ of the proposals were impressive; in general they were thorough, Vl

informative, and complete. It is reassuring that so many proposing organizations should have shown so much vision, competence, and commitment to excellence. Edward A. Frieman Chairman, Super Collider Site Evaluation Committee Vll

Contents Executive Summary 1 1. Introduction 2 2. The Superconducting Super Collider 4 3. Evaluating the Proposals 14 4. Comments on the Evaluation of Site Proposals 19 5. The Best Qualified List 26 Arizona/Maricopa, 26 Colorado, 28 Illinois, 29 Michigan/Stockbridge, 30 New York/Rochester, 31 North Carolina, 33 Tennessee, 34 Texas/Dallas-Fort Worth, 35 Sites not on the Best Qualified List, 36 APPENDIXES A. Statement of Work for the Committee 39 B. Meetings of the Committee and Its Subgroups 42 C. September 17 Letter from James F. Decker to Edward A. Frieman 44 D. October 26 Letter from Wilmot N. Hess to Edward A. Frieman 49 E. Biographical Sketches of Committee Members 50 IX

Next: Executive Summary »
Siting the Superconducting Super Collider Get This Book
× 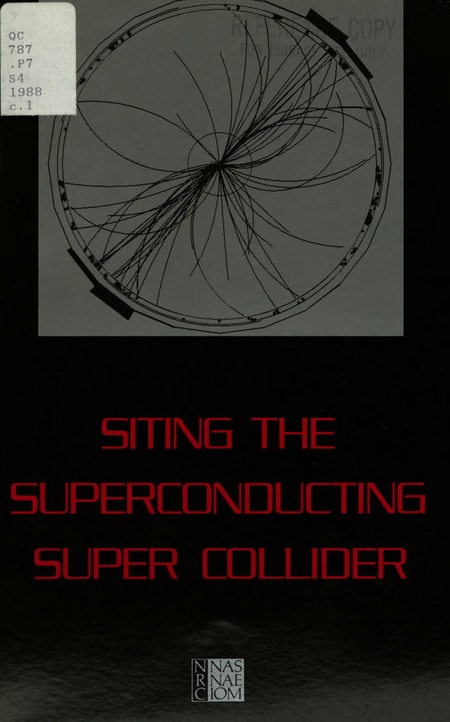