Get This Book
Visit NAP.edu/10766 to get more information about this book, to buy it in print, or to download it as a free PDF.
Page i Share Cite
Suggested Citation:"Front Matter." Institute of Medicine. 2014. Preparedness, Response, and Recovery Considerations for Children and Families: Workshop Summary. Washington, DC: The National Academies Press. doi: 10.17226/18550.
×

Preparedness,
Response, and Recovery
Considerations for
Children and Families

Forum on Medical and Public Health Preparedness for
Catastrophic Events

1Institute of Medicine planning committees are solely responsible for organizing the workshop, identifying topics, and choosing speakers. The responsibility for the published workshop summary rests with the workshop rapporteurs and the institution.

FORUM ON MEDICAL AND PUBLIC HEALTH PREPAREDNESS FOR CATASTROPHIC EVENTS1

1Institute of Medicine forums and roundtables do not issue, review, or approve individual documents. The responsibility for the published workshop summary rests with the workshop rapporteurs and the institution.

This workshop summary has been reviewed in draft form by individuals chosen for their diverse perspectives and technical expertise, in accordance with procedures approved by the National Research Council’s Report Review Committee. The purpose of this independent review is to provide candid and critical comments that will assist the institution in making its published workshop summary as sound as possible and to ensure that the workshop summary meets institutional standards for objectivity, evidence, and responsiveness to the study charge. The review comments and draft manuscript remain confidential to protect the integrity of the process. We wish to thank the following individuals for their review of this workshop summary:

Although the reviewers listed above have provided many constructive comments and suggestions, they did not see the final draft of the workshop summary before its release. The review of this workshop summary was overseen by KRISTINE GEBBIE, Flinders University School of Nursing and Midwifery. Appointed by the Institute of Medicine, she was responsible for making certain that an independent examination of this workshop summary was carried out in accordance with institutional procedures and that all review comments were carefully considered. Responsibility for the

final content of this workshop summary rests entirely with the rapporteurs and the institution.

Needed Focus on Children and Families

Development of a State Pediatric and Neonatal Surge Annex

7    PLANNING FOR CHILDREN AND FAMILIES DURING DISASTER RESPONSE

Child and Family Needs During Mass Care and Sheltering Operations

Ensuring That Children Are Coping

The Foundations of Research on Resilience in Children and Youth

B    Abbreviations and Acronyms

F    Resource List: Tools for Planning for Children and Families

H    Recommendations from the National Commission on Children and Disasters

Next: 1 Introduction and Overview »
Preparedness, Response, and Recovery Considerations for Children and Families: Workshop Summary Get This Book
× 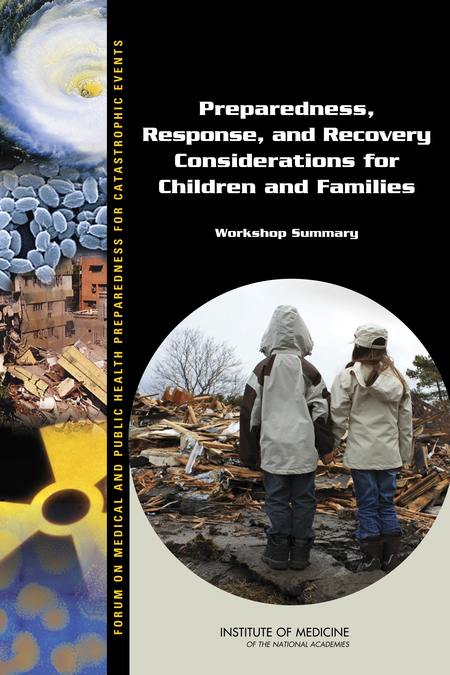 Preparedness, Response and Recovery Considerations for Children and Families is the summary of a workshop convened in June, 2013 by the Institute of Medicine Forum on Medical and Public Health Preparedness for Catastrophic Events to discuss disaster preparedness, response, and resilience relative to the needs of children and families, including children with special health care needs. Traditional and non-traditional medical and public health stakeholders from across federal, state, and local government health care coalitions, community organizations, school districts, child care providers, hospitals, private health care providers, insurers, academia, and other partners in municipal planning met to review existing tools and frameworks that can be modified to include children's needs; identify child-serving partners and organizations that can be leveraged in planning to improve outcomes for children; highlight best practices in resilience and recovery strategies for children; and raise awareness of the need to integrate children's considerations throughout local and state emergency plans.

Communities across the United States face the threat of emergencies and disasters almost every day, natural and man-made, urban and rural, large and small. Although children represent nearly 25 percent of the U.S. population, current state and local disaster preparedness plans often do not include specific considerations for children and families. The preparedness and resilience of communities related to children will require a systems framework for disaster preparedness across traditional and non-traditional medical and public health stakeholders, including community organizations, schools, and other partners in municipal planning. This report examines resilience strategies that lead to successful recovery in children after a disaster and discusses current approaches and interventions to improve recovery in children.