REFERENCE COPY FOR LIBRARY USE ONLY QUALITY-PROTEIN MAIZE Report of an Ad Hoc Panel of the Advisory Committee on Technology Innovation Board on Science and Technology for International Development National Research Council in Cooperation with the Board on Agriculture National Research Council PROPERTY c." BRC LIBRARY Information Service Springfield. Va, 2216) Order No. â _ NATIONAL ACADEMY PRESS Washington, D.C. 1988

Preface In Latin America, Africa, and Asia, several hundred million people depend on maize for their daily food. For many, it is the main source of dietary protein. Poverty makes it almost impossible for them to afford meat, eggs, or milk, except perhaps on a few special occasions. Some cannot afford even beans or other protein-rich plant foods to supplement the maize. And many raise very young children on foods that are almost entirely derived from maize. This dependence on a single crop creates a vulnerability in these societies because traditional maize varieties are poor in protein quality. By itself, traditional maize in such high proportions cannot sustain acceptable growth and adequate health, especially in children, pregnant and lactating women, and the sick. To help rectify this deficiency, researchers have attempted, for about 25 years, to create nutritionally improved types of maize. This effort was stimulated by the 1963 discovery that a little-known mutant maize contained proteins that are nearly twice as nutritious as those found in normal maize. Called "opaque-2 maize," its protein had a nutritive value about 90 percent of that of proteins found in skim milkâthe standard against which cereal protein is normally measured. The implications of this discovery were considered remarkable. It was estimated that adding the opaque-2 gene to the world's maize crop would add 10 million tons of quality protein to the world food supply. That, in turn, was expected to alleviate malnutrition among hundreds of millions of poor people in Latin America, Africa, and Asia. But in the 1970s many practical problems arose. Compared with ordinary maize, opaque-2 yielded less grain, and its grain weighed less, had higher moisture at harvest, and succumbed more to fungal infections and storage insect infestations. Many users disliked the grain's dull and chalky appearance, having been accustomed to hard and glossy kernels. Most industrial processors objected to the floury texture of the soft kernels, which were more difficult to store and to mill. vii

Opaque-2's development was then dealt a near-fatal blow when, beginning in 1974, a series of letters and articles appeared in medical and nutrition journals claiming that the world in fact had little or no protein shortage. The human requirement for protein is not high, said the writers, and if people would just eat more of their existing staples, the "protein gap" would disappear. Many nutritionists supported that view, and the fundamental reason for the creation of opaque-2 maize was undermined. By the mid-1970s, interest had declined almost to the vanishing point. Nonetheless, a few scientists persisted in trying to overcome the technical limitations of opaque-2. A notable effort was that of a small team of maize breeders at the Centro Internacional de Mejoramiento de Maiz y Trigo (CIMMYT). For 10 years, in their laboratories and fields in Mexico, they continued improving the agronomic qualities of the new maize. By the early 1980s, they claimed to have developed experimental varieties with high nutritive quality, high yields, normal moisture content, traditional appearance, and conventional hardness. By 1986, they had, it seemed, fundamentally transformed opaque-2 maize into a maize that was "normal" in all respects except for its superior nutritional value. They called the new variety "quality-protein maize" (QPM). The purpose of this study is to review QPM's status, to determine whether its previous limitations have indeed been overcome, to consider the potential of this transformation of one of the world's major crops, and to bring an appreciation of QPMâso far little known beyond a limited circle of plant breedersâto a wider audience. The panel that produced this report met in April 1986 at the CIMMYT headquarters in Mexico. Over a period of three days, panel members interviewed CIMMYT researchers, analyzed details of the QPM data, and traveled to a field research station to examine test plots. The NRC staff then followed up the panel's meeting by contacting other re- searchers (see contributors' list) and integrating their comments with those of the panel into the current text. This report is intended mainly for agencies engaged in development assistance and food relief, officials and institutions concerned with agriculture in developing countries, scientists with relevant interests, and corporations involved in cereal science. It is a joint project of two divisions of the National Research Council: the Board on Agriculture and the Board on Science and Technology for International Develop- ment (BOSTID). The report continues a BOSTID series that explores promising plant resources that heretofore have been unknown, ne- glected, or overlooked. This series is issued under the auspices of BOSTID's Advisory Committee on Technology Innovation (ACTI). vni

Established in 1971, ACTI's mandate is to assess unconventional scientific and technological advances of particular relevance to prob- lems of developing countries. Other plant-science titles in ACTI's series include: â¢ Underexploited Tropical Plants with Promising Economic Value (1975) â¢ Making Aquatic Weeds Useful: Some Perspectives for Developing Countries (1976) â¢ Tropical Legumes: Resources for the Future (1979) â¢ The Winged Bean: A High-Protein Crop for the Tropics (1981) â¢ Amaranth: Modern Prospects for an Ancient Crop (1983) â¢ Triticale: A Promising Addition to the World's Cereal Grains (1988) â¢ Lost Crops of the Incas (In preparation). The panel members are grateful to the CIMMYT staff for their assistance and hospitality, as well as for the yield information and other basic data on which this report's conclusions are based. Funds for this study were made available by the Office of Agriculture in the Bureau for Science and Technology, and by the Office of the Science Advisor, U.S. Agency for International Development. How to cite this report: National Research Council. 1988. Quality-Protein Maize. National Academy Press, Washington, B.C. IX 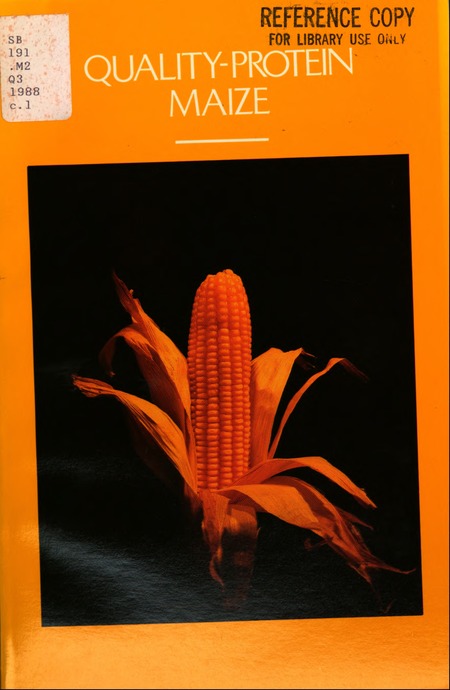