Performance Assessment for the Workplace: Volume I (1991)

Get This Book
Visit NAP.edu/10766 to get more information about this book, to buy it in print, or to download it as a free PDF.
Page i Share Cite
Suggested Citation:"Front Matter." National Research Council. 1991. Performance Assessment for the Workplace: Volume I. Washington, DC: The National Academies Press. doi: 10.17226/1862.
×

Performance Assessment for the Workplace

Committee on the Performance of Military Personnel

The Institute of Medicine was established in 1970 by the National Academy of Sciences to secure the services of eminent members of appropriate professions in the examination of policy matters pertaining to the health of the public. The Institute acts under the responsibility given to the National Academy of Sciences by its congressional charter to be an adviser to the federal government and, upon its own initiative, to identify issues of medical care, research, and education. Dr. Stuart Bondurant is acting president of the Institute of Medicine.

This project was supported by the Office of the Assistant Secretary of Defense (Force Management and Personnel).

Additional copies of this report are available from:

COMMITTEE ON THE PERFORMANCE OF MILITARY PERSONNEL

Department of Sociology, University of Maryland

This is the sixth and final report of the Committee on the Performance of Military Personnel, which was established at the request of the Department of Defense (DoD) in 1983 to provide scientific oversight of the Joint-Service Job Performance Measurement/Enlistment Standards (JPM) Project. That pioneering research effort, now 10 years under way, proposed to develop robust measures of performance in entry-level military jobs so that, for the first time, military enlistment standards could be linked to performance on the job. The JPM Project was launched during a time when the transition to a system of voluntary military service was still a matter of public controversy and the issue of whether the Services could attract enough qualified people into the enlisted ranks a central policy concern. Its fruition is coming after years of great recruiting success, at a time when budgetary stringencies have recast the policy debate to address the cost-effectiveness of high-quality enlisted personnel.

Because of the complexity of the JPM Project research goals, as well as the pressing need to establish the credibility of military selection and classification procedures after technical errors in computing enlistment test scores were discovered in 1980, DoD turned to the National Academy of Sciences to provide independent technical review of the research as it progressed.

Created by act of Congress in 1863 as a private, nonprofit corporation, the National Academy of Sciences enjoys a unique position as an official, yet independent, adviser to the federal government. The Academy accomplishes its work through committees of experts established within the National Research Council. It has demonstrated consistently that it can call on

the very best scientific and technical expertise nationwide. The independence and objectivity of NRC committees are carefully protected: the Academy does not reply to competitive requests for proposals; members of study committees serve without monetary compensation and are carefully screened for possible conflicts of interest; and the reports produced by committees are subject to thoroughgoing review before being transmitted to sponsors.

The Committee on the Performance of Military Personnel was selected in accordance with this tradition of excellence and independence. Housed within the Commission on Behavioral and Social Sciences and Education, its membership was drawn from the scientific and policy fields of greatest relevance to the JPM Project: psychometrics, performance measurement, industrial and organizational psychology, research design and statistics, military sociology, economics, human resource management, and military manpower policy. The committee included both scholars and practitioners—those whose scientific sophistication represents the state of the art, as well as those who understand firsthand the exigencies of real-world applications. General John Roberts (USAF, Ret.), former head of Air Training Command, brought to committee deliberations experience at the highest policy levels with military selection, classification, and training issues. John Bentz offered the insights gleaned from 35 years as director of personnel research for a major nationwide retailing company. Biographies of all committee members and staff appear in Appendix B.

The first phase of the JPM Project entailed the development of measures of performance for a sample of military jobs—jobs like jet engine mechanic, avionics communication specialist, infantryman, and medical technician. The goal was to determine how well the Armed Services Vocational Aptitude Battery (ASVAB), the test that is used throughout the military to assess enlistment eligibility, predicts performance on these high-fidelity measures of job performance. The committee 's advisory activities in the early years centered on evaluation of the research design and the development of measurement instruments (e.g., hands-on tests, written job knowledge tests, supervisor ratings) and issues in hands-on test administration. Later the focus turned to evaluation of the quality of the measures and analysis of the performance data to understand the relationships among the various new performance measures and to ASVAB scores and other input characteristics. (The second phase of the project, now well under way, is exploring the use of cost/performance trade-off models for setting enlistment standards. A new Committee on Military Enlistment Standards has been established by the National Academy of Sciences to advise on that work.)

In order to enhance its understanding of the job performance measurement research and to place the project in proper context, members of the Committee on the Performance of Military Personnel also learned about military entrance processing, entry-level jobs in the military, technical training,

and the general outlines of how entrance standards are currently set. Committee and staff members made a series of site visits to Army, Navy, Marine Corps, and Air Force bases to see enlisted personnel at work, to talk to their supervisors about the content of entry-level jobs, and to observe the administration of hands-on tests. They experienced at firsthand the operation of military entrance processing stations, visited training facilities, and also made a number of visits to military personnel research laboratories to gather information and discuss the progress of the research.

To facilitate the exchange of ideas, over the years the committee invited JPM Project scientists as well as other experts to explore solutions to specific technical problems in a series of workshops. And, to supplement its own activities, the committee has called on outside experts to prepare background papers on various aspects of the issues involved. A selection of these papers is presented in the companion volume to this report.

This book is a distillation of the experiences and insights and many things learned by the committee over the years since its founding in 1983 and, we hope, conveys at least a modicum of what the Service research scientists learned as well. It represents many years of faithful attention by committee members to the task at hand, frequent delight in the collegial nature of the enterprise, and a lot of sheer hard work. In the course of preparing the report, each of the members took an active role in drafting sections or chapters, providing data, leading discussions, and reading and commenting on successive drafts. Robert Linn bore primary responsibility for drafting the chapter on criterion-related validity. Richard Shavelson made major contributions to several chapters. Frank Landy and Lloyd Bond organized team efforts on the development of performance measures and standardization issues, respectively. John Roberts drafted sections on manpower policy issues.

Our work has benefited over the years from the contributions of many inside and outside the military. We were received with unfailing courtesy and openness at numerous military installations and provided with as much information as we could think to request. We developed a productive working relationship with the Job Performance Measurement Working Group, which coordinates the research effort, under the successive leadership of Col. Charles R. Curran, Lt. Col. Burt Itoga, Lt. Col. Dickie Harris, and Lt. Col. Thomas Ulrich. David J. Armor, former principal deputy to the Assistant Secretary of Defense (Force Management and Personnel) and currently a member of the follow-on Committee on Military Enlistment Standards, stimulated many a good discussion of technical challenges. Our workshops were enlivened by the presentations of many of the military researchers and their contractors, among others Milton H. Maier, Lawrence Hanser, Gerald Laabs, Col. Rodger D. Ballentine, Paul W. Mayberry, John Campbell, Leonard P. Kroeker, and Jerry W. Hedge.

In addition to the authors of papers that appear in the accompanying volume, Brian K. Waters, Janice H. Laurence, and Wayne J. Camara contributed a separately published paper on personnel enlistment and classification procedures in the U.S. military. Stephen B. Dunbar 's analysis of JPM data forms the basis of the discussion of group-to-group differences in prediction systems presented in Chapter 8. Gail P. Baxter and James R. Valadez of the University of California at Santa Barbara assisted Richard J. Shavelson with background materials.

Carolyn Sax, the committee's administrative assistant, was indispensable in keeping track of everything from errant committee members to errant commas. We could not have managed half so well without her quiet competence. Thanks are due as well to her extremely able predecessor, Diane Goldman, to research associates Hilda Wing and Anne S. Mavor, and to Christine McShane, who has edited all of the committee's reports and in the process become something of an expert on job performance measurement in the military.

A special note of thanks is due to W.S. Sellman, director for accession policy in the Office of the Assistant Secretary of Defense (Force Management and Personnel), who had the tenacity needed to see the JPM Project through to fruition and a great enough respect for science to subject himself to the ministrations of an independent advisory committee.

Committee on the Performance of Military Personnel

Performance Assessment for the Workplace

Next: Overview »
Performance Assessment for the Workplace: Volume I Get This Book
× 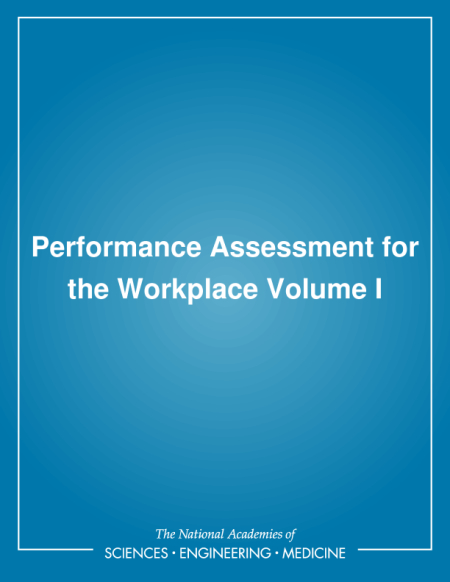 Although ability testing has been an American preoccupation since the 1920s, comparatively little systematic attention has been paid to understanding and measuring the kinds of human performance that tests are commonly used to predict—such as success at school or work. Now, a sustained, large-scale effort has been made to develop measures that are very close to actual performance on the job. The four military services have carried out an ambitious study, called the Joint-Service Job Performance Measurement/Enlistment Standards (JPM) Project, that brings new sophistication to the measurement of performance in work settings.

Volume 1 analyzes the JPM experience in the context of human resource management policy in the military. Beginning with a historical overview of the criterion problem, it looks closely at substantive and methodological issues in criterion research suggested by the project: the development of performance measures; sampling, logistical, and standardization problems; evaluating the reliability and content representativeness of performance measures; and the relationship between predictor scores and performance measures—valuable information that can also be useful in the civilian workplace.