Visit NAP.edu/10766 to get more information about this book, to buy it in print, or to download it as a free PDF.
Page i Share
Suggested Citation:"Front Matter." National Academy of Sciences. 2014. Climate Change: Evidence and Causes. Washington, DC: The National Academies Press. doi: 10.17226/18730.
×

2 Clim ate Cha nge n summ ary CLIMATE CHANGE IS ONE OF THE DEFINING ISSUES OF OUR TIME. It is now more certain than ever, based on many lines of evidence, that humans are changing Earthâs climate. The atmosphere and oceans have warmed, accompanied by sea-level rise, a strong decline in Arctic sea ice, and other climate-related changes. The evidence is clear. However, due to the nature of science, not every single detail is ever totally settled or completely certain. Nor has every pertinent question yet been answered. Scientific evidence continues to be gathered around the world, and assumptions and findings about climate change are continually analysed and tested. Some areas of active debate and ongoing research include the link between ocean heat content and the rate of warming, estimates of how much warming to expect in the future, and the connections between climate change and extreme weather events. The Royal Society and the US National Academy of Sciences, with their similar missions to promote the use of science to benefit society and to inform critical policy debates, offer this new publication as a key reference document for decision makers, policy makers, educators, and other individuals seeking authoritative answers about the current state of climate-change science. The publication makes clear what is well established, where consensus is growing, and where there is still uncertainty. It is written and reviewed by a UK-US team of leading climate scientists. It echoes and builds upon the long history of climate-related work from both national science academies, as well as the newest climate- change assessment from the United Nationsâ Intergovernmental Panel on Climate Change. Scientific information is a vital component of the evidence required for societies to make sensible policy decisions. Climate-change science will continue to help society make informed decisions about how to reduce the magnitude of climate change and to adapt to its impacts. The Royal Society and the US National Academy of Sciences will continue to support the use of robust science toward these critical goals. In 2008 Raymond and Beverly Sackler established the USA-UK Scientific Forum to help the scientists of the United Kingdom and the United States forge an enduring partnership on topics of worldwide scientific concern. As Presidents of the Royal Society and National Academy of Sciences, we are pleased to introduce the latest piece of work supported by the Sacklersâ inspired generosity. Dr. Ralph J. Cicerone President, National Academy of Sciences Sir Paul Nurse President, Royal Society Foreword

Next: Table of Contents »
Climate Change: Evidence and Causes Get This Book
× 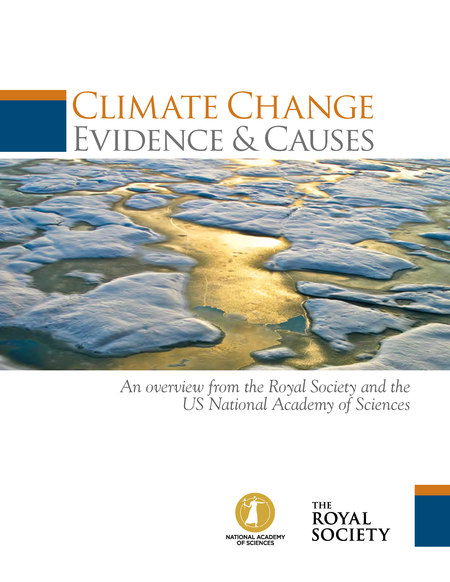 Climate Change: Evidence and Causes is a jointly produced publication of The US National Academy of Sciences and The Royal Society. Written by a UK-US team of leading climate scientists and reviewed by climate scientists and others, the publication is intended as a brief, readable reference document for decision makers, policy makers, educators, and other individuals seeking authoritative information on the some of the questions that continue to be asked.

Climate Change makes clear what is well-established and where understanding is still developing. It echoes and builds upon the long history of climate-related work from both national academies, as well as on the newest climate-change assessment from the United Nations' Intergovernmental Panel on Climate Change. It touches on current areas of active debate and ongoing research, such as the link between ocean heat content and the rate of warming.