Chapter:Appendix F: Illustrations of the Phase-In of the Committee's Recommendations

Get This Book
Visit NAP.edu/10766 to get more information about this book, to buy it in print, or to download it as a free PDF.
« Previous: Appendix E: Data and Methods to Analyze Medicare GME Payments
Page 203 Share Cite
Suggested Citation:"Appendix F: Illustrations of the Phase-In of the Committee's Recommendations." Institute of Medicine. 2014. Graduate Medical Education That Meets the Nation's Health Needs. Washington, DC: The National Academies Press. doi: 10.17226/18754.
×

Illustrations of the Phase-In of the Committee’s Recommendations

This appendix provides three illustrations of the phase-in of the committee’s recommendations. See Appendix E for a description of the data and methods used here.

Aggregate funding levels in the Operational Fund will be reduced initially to 90 percent of current graduate medical education (GME) funding levels and transition to 70 percent by Year 5. Table F-1 illustrates how funds would be allocated between the Operational and Transformation Funds over the first 5 years of the transition. The illustration assumes that the base-year funding amount would equal the most recent estimates provided by the Centers for Medicare & Medicaid Services and presented in Chapter 3. One method for reducing the operational funding to generate the funding for the Transformation Fund would be to phase in a 50 percent reduction in indirect medical education (IME) operating payments to acute care hospitals. In the first year, a 14 percent IME reduction would be needed to fund the Transformation Fund. If the additional IME reduction were evenly phased in over Years 2-5, approximately an additional

By Year 5, the funding formulas would be changed from hospital-specific amounts to a national combined per-resident amount (PRA). The separate direct graduate medical education (DGME) and IME funding streams would be changed to a combined PRA. The 50 percent weighting for residents beyond their initial residency program in the current DGME funding formula would be incorporated into the portion of the combined PRA attributable to DGME.

The combined PRA would be allocated initially on the basis of the number of Medicare-funded resident slots without regard to Medicare use rates. Ultimately, performance-based funding allocations would be implemented.

Table F-2 illustrates a general approach to determining the combined PRA. First, the average DGME payment per resident is calculated (exclusive of children’s hospitals). The PRA would be budget neutral to estimated aggregate DGME payments for the same set of hospitals after adjustment by the Medicare geographic adjustment factor (GAF). The resulting DGME per-resident amount was $37,300 before any adjustments for inflation.2

The amount for residents beyond their initial residency period would be 50 percent of this amount, or $18,650.

Next, we calculated an average GAF-adjusted IME payment per resident for general acute care hospitals that would be budget neutral to estimated IME payments if IME operating payments were reduced by 50 percent, consistent with the Medicare Payment Advisory Commission’s finding that the current levels are twice the amount empirically attributable to higher patient care costs (MedPAC, 2010). The resulting IME per-resident amount was $43,435.

1 The reductions would be made only to the operating IME payment based on the Medicare Payment Advisory Commission’s findings. The capital adjustment is empirically derived, as are the IME payments to psychiatric and rehabilitation hospitals.

2 This amount does not take into account the 6 percent differential between primary care and other residency programs that currently applies to hospital-specific PRAs but not to the national PRA applicable to new residency slots.

composite rate and no weighting was applied to the IME portion. The committee suggests that the proposed GME Policy Council review this weighting scheme and also assess whether the combined PRA should vary for other types of residents, for example, residents in primary care, dentistry and podiatry, and rural training programs.3

3 The GME Policy Council might also consider whether the geographic adjustment to the PRA should be revised to reflect specific GME cost components. See the Institute of Medicine report Geographic Adjustment in Medicare Payment. Phase I: Improving Accuracy for background and recommendations regarding the Medicare geographic price indexes (available at http://www.nap.edu/catalog.php?record_id=13138) (accessed April 23, 2014).

Table F-3 illustrates the types of redistributions that will occur with the implementation of the combined PRA by type of hospital for the Prospective Payment System hospitals in our cost report analysis file. The percentage change in payment attributable to the 50 percent reduction in IME payments (–34 percent) is shown separately. It produces relatively minor differences in the impacts across hospital groups that reflect differing proportions of total GME payments attributable to IME. IME payments are on average a higher proportion of total GME payments in hospitals with a large number of Medicare discharges than hospitals with relatively fewer discharges. As a result, the IME reduction has a greater impact on GME funding for residents at the larger hospitals. The remaining changes are budget neutral in the aggregate.

Under current policy, the DGME counts and the IME counts are not the same because of differences in the rules for counting resident time. Moreover, because of the rolling average used in the current methodology, some hospitals are receiving funding for more residents than they are training. This policy was implemented when there was a projected surplus of physician supply and is no longer appropriate. Nevertheless, the illustration uses the resident counts to determine IME and DGME payments under current Medicare policies. The committee suggests that a single policy for counting residents (with appropriate weighting) should apply to the allocation of the combined PRA. Once the funding flows to the program sponsor, most issues that have complicated resident counts under current IME and DGME funding policies would be eliminated and the counting rules would be more straightforward.

TABLE F-3 Illustration of Impacts of Changing to Combined PRA 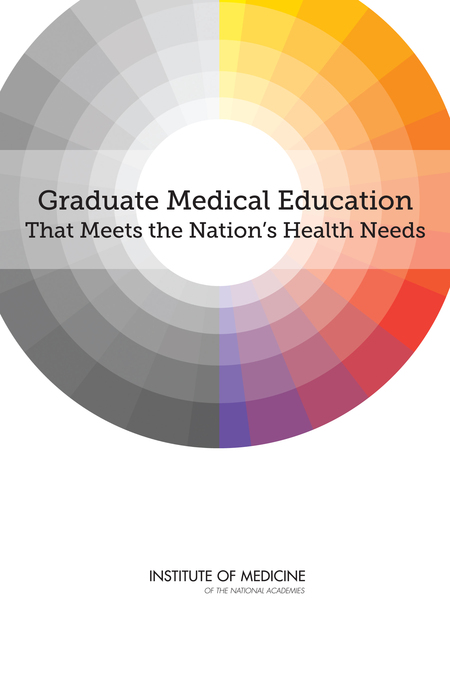 Graduate Medical Education That Meets the Nation's Health Needs is an independent review of the goals, governance, and financing of the graduate medical education system. This report focuses on the extent to which the current system supports or creates barriers to producing a physician workforce ready to provide high-quality, patient-centered, and affordable health care and identifies opportunities to maximize the leverage of federal funding toward these goals. Graduate Medical Education examines the residency pipeline, geographic distribution of generalist and specialist clinicians, types of training sites, and roles of teaching and academic health centers.

The recommendations of Graduate Medical Education will contribute to the production of a better prepared physician workforce, innovative graduate medical education programs, transparency and accountability in programs, and stronger planning and oversight of the use of public funds to support training. Teaching hospitals, funders, policy makers, institutions, and health care organizations will use this report as a resource to assess and improve the graduate medical education system in the United States.