Carbon dioxide removal (CDR) approaches generally share some characteristics with respect to how they are perceived by society. Some methods, such as direct air capture and sequestration (DACS) and reforestation, result in far less of a perturbation to the Earth system than that associated with albedo modification (see companion report Climate Intervention: Reflecting Sunlight to Cool Earth). Deployment of such methods is more likely to be viewed as an “undoing” of what has been done and, thus, may be perceived as more benign. Moreover, these approaches act slowly, allowing some time to assess the impacts and either adapt or cease deployment on more land or the activity itself prior to the occurrence of possible significant negative secondary effects. These characteristics—the undoing, the opportunity to assess as things evolve, and the ability to stop—define the social context under which such measures are deployed.

Overall, the basic concept of removing CO2 from the atmosphere is relatively uncontroversial, especially in comparison to albedo modification (see companion report). The primary exceptions are proposals to fertilize the ocean with iron or other micronutrients (see Ocean Iron Fertilization in Chapter 3), which raise legal and ethical concerns, and various land management techniques, which raise political and social issues related to the competition for land use. Last, economic considerations are important for all of the CDR approaches discussed in this volume.

Ocean iron fertilization directly manipulates the base of the ocean food web in order to stimulate the growth of phytoplankton to enhance carbon uptake and, as such, is of concern from both legal and ethical perspectives. The implications for the health of the marine ecosystem are not well known and could potentially be substantial on regional scales, both ecologically and economically. To a lesser extent, proposals for accelerated weathering in the ocean also raise questions concerning the potential impacts on ocean ecosystems due to the possibility of large volumes of material to be disposed of in the ocean.

Legally, under the international treaties of the London Protocol and London Convention, dumping of wastes into the ocean is forbidden. The International Convention

on Biological Diversity requested that its own parties “ensure that ocean fertilization activities do not take place until either there is adequate scientific basis on which to justify such activities or the activities are small-scale scientific research studies within coastal waters” (Bracmort and Lattanzio, 2013; CBD, 2010).

Overall, there are ethical concerns over the use of the ocean as a dumping ground. There have already been examples of an iron fertilization experiment that has been temporarily blocked by nongovermental organizations to prevent “dumping” of iron in the Southern Ocean (Schiermeier, 2009a,b), as well as controversy surrounding the actions of a unilateral and uncoordinated activity that involved experimenting with ocean fertilization in the Northern Pacific (see Box 2.1).

Ethical issues for the other CDR techniques described in this volume are generally of much less concern since there is generally less direct interference with local or regional environmental conditions, and the considerations are about the practical matters for most of these CDR techniques. These techniques produce a slow response, so the effects of climate change will continue to increase before they lessen, and nations that are engaged in such practices may have to deal with perceptions of their futility, posing challenges to sustained long-term deployment.

Among CDR approaches, there are differing social implications as well as different perceptions. Land management approaches—including afforestation, reforestation, and bioenergy production—have the potential to initiate debates over land use. This is especially true regarding the clearing of areas that are currently in native vegetation or are used for agricultural production for the purpose of growing bioenergy crops. These debates include the “food versus fuel” dilemma, in particular for corn-based ethanol (Ayre, 2007; Babcock, 2011; Grundwald, 2008; Wilson, 2008). The CDR approaches that involve geological sequestration generally involve limited public perception issues (Mabon et al., 2013). Nevertheless, they are subject to the same environmental and safety risks posed by carbon capture and dequestration (CCS) (leakage, seismic activity, and water contamination; see Geological Sequestration) and therefore are not without political, social, legal, and ethical implications.

As described in Chapter 3, many of the barriers to implementation of CDR approaches are in large part driven by economics and effectiveness. In addition, the slowly acting

nature of these measures, and the need for their deployment to be large scale in order to be effective relative to the global climate, bring about an additional social consideration: determining how the burden and cost of deployment will be shared. Arguments employed today against reducing our domestic fossil fuel consumption often focus on the burden that would be absorbed by the United States or the vast majority of people yet to share in the benefits of modern society, and the perceived futility of any national program, as long as other nations—like China and India—continue to burn fossil fuels at high rates. Similar perceptions will likely be the case with CDR. Because it is slow acting, substantive change on the timescales of interest (i.e., decades) will require adoption of CDR techniques on the international scale. The social context is less about understanding how one set of actions affects the global climate or large numbers of people in the short term and more about how to mobilize multiple nations to engage in a coordinated effort. Such action requires each participating country to make a sacrifice or investment (depending mainly on how the challenge is perceived or framed) for a lower-carbon future, similar to what is required to reduce fossil fuel emissions.

CDR approaches present opportunities to address the excess levels of CO2 in the atmosphere, but there are limitations to these approaches that must be overcome if they are to be implemented widely. In particular, implementation of bioenergy with carbon capture and sequestration (BECCS) and/or DACS on a large scale depends on the relationship between cost of deployment and effective price on carbon emissions, which could be imposed either directly (e.g., with a tax or via cap-and-trade mechanism) or indirectly (e.g., with performance standards). Although the committee does not advocate for any specific policies related to carbon emissions, we note that poli-

cies (or lack thereof) are an important part of the economic calculations for determining the viability of various CDR approaches.

Integrated assessment models (IAMs) are common tools for—among other things—evaluating the potential role of CDR techniques in the various climate change mitigation scenarios, as they include many of the interconnected complexities such as climate and atmospheric modeling, agriculture and land use, and various technologies to be implemented with their related economics (Kriegler et al., 2013). Of the CDR strategies considered in this report, BECCS is the most commonly incorporated in the IAMs.1 In many of the scenarios examined by IAMs, for stabilization of atmospheric greenhouse gases CO2-equivalent (CO2-eq) atmospheric concentrations at a reduced level of 450 ppm, abatement cost is greatly reduced with the inclusion of BECCS.2 For example, Edmonds et al. (2013) report that to limit radiative forcing to 2.6 W/m2 and meet the 450-ppm CO2-eq target by 2100 requires carbon prices of $16/tCO2 in 2020, rising to $620/tCO2 in 2095; this scenario is driven by the availability of technological options for CDR, which are time dependent, with a greater number of options available in the near term.3 Although the exact price estimates are likely to be highly uncertain, a general lesson learned from these IAM studies is that projected carbon prices are about three times higher if BECCS and DACS are not available.

In the case of delayed action along one of the climate change mitigation trajectories, costs increase significantly. The study by Kriegler et al. (2013) reports similar carbon prices with an estimated 5 percent annual rate of increase; for the various scenarios considered, they estimated a near-term price of between $10/tCO2 and $50/tCO2, rising to $500/tCO2 to $2500/tCO2 in 2100. Azar et al. (2010) estimate that it may take half a century for the technological and social infrastructure for practical and cost-effective BECCS to exist, to be applied at a global scale, and to reduce atmospheric carbon dioxide concentrations at a significant rate (e.g., 0.5 to 1 ppm CO2/yr, or 8 to 16 GtCO2/yr4).

3 Future options will be limited by available land and pressures from an increased population; for further discussion of these issues, see Chapter 3.

4 The amount of CO2 that must be captured and stored in order to reduce the amount of CO2 in the atmosphere by one ton depends on emission scenarios and assumptions about the global carbon cycle. The committee uses a ratio of 2:1 for simplicity based on the fraction of CO2 emissions that remain in the atmosphere under current conditions (see Table 2.1), but there are also positive feedbacks (e.g., release of CO2 from permafrost) that may make this ratio higher (MacDougall, 2013).

In the analysis of Kreigler et al. (2013), BECCS is limited to a removal of ~15 GtCO2/yr;5 they conclude that if CDR were to be applied at sufficiently large scale, DAC would become economically competitive with BECCS due to land and resource limitations. Overall, the inclusion of BECCS into integrated assessment models allows for significantly lower targets to become possible at reduced costs.

It is important to emphasize that both BECCS and DACS, which are the CDR approaches that appear to have the greatest potential for carbon dioxide reduction given the current state of knowledge, depend on the availability of geologic reservoirs capable of accepting and reliably storing massive amounts of CO2 (discussed in more detail in Chapter 3). Although the technology to capture CO2 and sequester it in a geological reservoir exists today, significant improvements would be required for widespread deployment. Today there are five commercial-scale projects capturing and disposing of CO2 at a combined rate of ~5 MtCO2/yr, with approximately 35 MtCO2 sequestered since 1996 (Benson et al., 2012). According to the IAMs highlighted in the Special Issue on Science Policy of Negative Emissions Technologies in the journal Climatic Change (Tavoni and Socolow, 2013), the rates of future CDR range from 10 to 35 GtCO2/yr. Meeting this challenge will require a thousandfold scale-up of the current CCS activities that take place today. CDR is at an early development stage, and further research and development and emerging technologies may greatly lower costs and increase capacity and deployment readiness and may thus significantly alter the above conclusions. 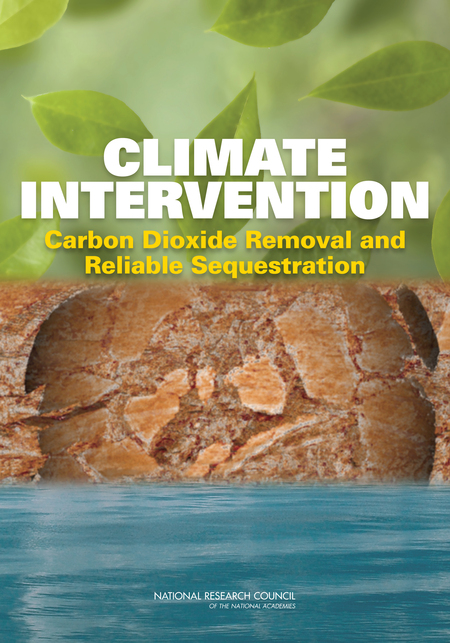