Get This Book
Visit NAP.edu/10766 to get more information about this book, to buy it in print, or to download it as a free PDF.
Page i Share Cite
Suggested Citation:"FRONT MATTER." National Research Council. 1992. Conserving Biodiversity: A Research Agenda for Development Agencies. Washington, DC: The National Academies Press. doi: 10.17226/1925.
×

A Research Agenda for Development Agencies

The Institute of Medicine was established in 1970 by the National Academy of Sciences to secure the services of eminent members of appropriate professions in the examination of policy matters pertaining to the health of the public. The Institute acts under the responsibility given to the National Academy of Sciences by its congressional charter to be an adviser to the federal government and, upon its own initiative, to identify issues of medical care, research, and education. Dr. Stuart Bondurant is acting president of the Institute of Medicine.

The Board on Science and Technology for International Development (BOSTID) of the Office of International Affairs, National Research Council, addresses a range of issues arising from the ways in which science and technology in developing countries can stimulate and complement the complex processes of social and economic development. It oversees a broad program of bilateral workshops with scientific organizations in developing countries and conducts special studies.

In 1980, the National Academy of Sciences published a report entitled Research Priorities in Tropical Biology. The authors of that report stated that "destruction of tropical vegetation has attracted the attention of many national and international bodies, especially during the last two decades. If this destruction continues at its present rate until the twenty-first century, it will lead to alteration in the course of evolution worldwide, to widespread human misery, and to loss of the very knowledge that might be used to moderate the other consequences" (NAS, 1980).

Eight years later, the Academy published a book entitled Biodiversity, in which its editor, E. O. Wilson, rephrased and broadened the same concern: "Biological diversity must be treated more seriously as a global resource, to be indexed, used, and above all, preserved. Three circumstances conspire to give this matter an unprecedented urgency. First, exploding human populations are degrading the environment at an accelerating rate, especially in tropical countries. Second, science is discovering new uses for biodiversity in ways that can relieve both human suffering and environmental destruction. Third, much of the diversity is being lost through extinction caused by the destruction of natural habitats, again especially in the tropics. We must hurry to acquire the knowledge on which a wise policy of conservation and development can be based for centuries to come" (Wilson, 1988).

Between the publication dates of these two books, literally hundreds of books, articles, and reports were written, and scores of symposia, workshops, meetings, and seminars were organized to publicize the fact that the Earth's biological diversity was decreasing. Locally and internationally financed programs to conserve biodiversity were implemented. The promise of these new efforts, however, is tempered by the reality of the situation: between 1950 and 1990 an estimated 30 to 40 percent of the tropical rain forest disappeared, and with the projected disappearance of an equal amount of forests over the next thirty to fifty years, a quarter of the world's species diversity may vanish forever—more than 2 million species or, on average, 200 per day (Raven, 1988; Wilson, 1989; Ehrlich and Wilson, 1991).

The fate of the tropical forests has come to signify the fate of biodiversity throughout the developing world, indeed throughout the entire world.1 The successes and failures of conservation efforts over the last decade have demonstrated that the erosion of biological diversity can be stopped only through novel and complex mixtures of economic, social, and political action based on a sound knowledge of ecosystems, including the role of the people who live there. Although we know a great deal about the causes of biodiversity loss, we are only beginning to understand how to formulate development strategies that are based on, and simultaneously conserve, biological diversity. Most people want to protect wildlife and natural resources, but do not know how best to act. At the same time, there is great urgency to act.

This report has been prepared in response to a request from the United States Agency for International Development for a research agenda to provide the critical information needed by decision makers in formulating policy and designing programs to conserve biodiversity. The focus of the study emerged from an organizational meeting, at which it was agreed that the three areas of conservation, economics, and cultural aspects are the most important from the perspective of development agencies. The committee's report draws together findings based on information generated by three meetings of experts in these respective areas.

We stress at the outset that when existing information can be used to implement programs, it should be; the need for more research should not be an excuse to delay action. Although the information and recommendations included here have general relevance for those involved in the conservation of biological diversity, this report is directed specifically toward development agency personnel and development practitioners (nongovernmental and private voluntary organizations).

This audience is important for several reasons. First, biodiversity is greatest in the developing nations of the tropics where development agencies and practitioners expend considerable resources. Through self-examination or persuasion, these agencies are now coming to view conservation as an integral part of the development process (WRI, 1991). The case, however, needs to be strengthened, especially in times of constrained resources and competing demands. All of us must be interested in conservation—locally, regionally, and globally. Because industrial countries use and control a disproportionate share of the world's resources, they must participate in the implementation of sustainable development in the tropics and elsewhere if a new and more enlightened conservation ethic is to take hold.

Second, industrial countries and development organizations are already devoting substantial resources to these issues, and because the economies in many developing nations are weak, development agencies are likely to be the major funding sources for biodiversity-related activities in the near future. These organizations, however, have limited experience with biodiversity issues and are actively seeking advice on the types of activities they should support.

Third, biodiversity in developing countries cannot be conserved over the long run unless local peoples and national economies simultaneously derive social and economic benefits. This will require not only improved methods of resource management and the creation of products and markets, but the development of economic paradigms involving new institutions, incentives, and policies. International development organizations such as the World Bank and the U.S. Agency for International Development, by the nature of their interaction with the economies of developing nations, will play an important catalytic role in this process.

Decision makers in developing nations constitute an equally important audience for this publication. Biodiversity has been labeled a "developed nation issue." Developing nations often sense that their interests are disregarded by the industrialized world. The developed nations, it has been asserted, are interested in preserving biodiversity only for later exploitation or for global benefit—that is, for their own greater benefit. At the same time, industrial countries have shown a reluctance to change policies and practices that cause environmental degradation and threaten not only their own resource base but the global environment as well. In reality, the biodiversity crisis is a global problem, and each nation or society has a role to play in meeting the challenge ahead. Most developing countries are deeply concerned about the loss of biodiversity but generally lack the means to act on that concern.

In this report, the Panel on Biodiversity Research Priorities has tried to indicate avenues of research that may be helpful in preserving biodiversity and ways in which development agencies can support the people and institutions that study and manage it. This report does not contain a complete action plan or technical research program, nor does it present a detailed discussion of the importance of biodiversity or the reasons for its loss. Numerous recent publications provide comprehensive coverage of these areas (see the References and Recommended Reading at the end of this report). Rather, it presents a research agenda in areas considered of critical importance to the conservation of biodiversity and a discussion of their relevance to sustainable development.

Next: EXECUTIVE SUMMARY »
Conserving Biodiversity: A Research Agenda for Development Agencies Get This Book
× 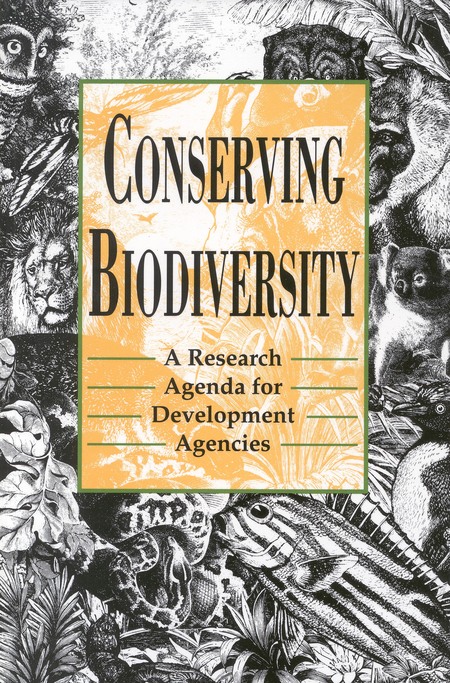 The loss of the earth's biological diversity is widely recognized as a critical environmental problem. That loss is most severe in developing countries, where the conditions of human existence are most difficult. Conserving Biodiversity presents an agenda for research that can provide information to formulate policy and design conservation programs in the Third World.

The book includes discussions of research needs in the biological sciences as well as economics and anthropology, areas of critical importance to conservation and sustainable development. Although specifically directed toward development agencies, non-governmental organizations, and decisionmakers in developing nations, this volume should be of interest to all who are involved in the conservation of biological diversity.