Get This Book
Visit NAP.edu/10766 to get more information about this book, to buy it in print, or to download it as a free PDF.
Page i Share Cite
Suggested Citation:"Front Matter." National Research Council. 1992. Grasslands and Grassland Sciences in Northern China. Washington, DC: The National Academies Press. doi: 10.17226/1942.
×

A Report of the

Committee on Scholarly Communication with the People's Republic of China

Founded in 1966, the CSCPRC represents American scholars in the natural and engineering sciences, the social sciences, and the humanities, including Chinese studies. The Committee is composed of scholars from all these fields. In addition to administering exchange programs, the CSCPRC advises individuals and institutions on scholarly communication between the United States and China. Administrative offices of the CSCPRC are located in the National Academy of Sciences, Washington, D.C.

Department of Geology and Geography University of Massachusetts Amherst, MA 01003-0026

One of the goals of the Committee on Scholarly Communication with the People's Republic of China (CSCPRC) is to gather and disseminate information on scientific and scholarly activities in China. This report on grasslands and grassland sciences in northern China reflects this worthy purpose. The report gives a general overview of the ecosystems and the major human land use patterns in this region. This is followed by a review of the Chinese literature on these grasslands and a survey of the principle scientific institutions engaged in this research. The final section presents the perspectives of U.S. and British scientists who have worked on environmental, social, economic, and political issues related to grasslands in China and around the world.

The primary objective of this report is to provide new, detailed information on grasslands and grassland sciences in China. But I believe it has accomplished much more. The results of our study give a striking example of the complex political, economic, and environmental interaction faced by nations around the world. The report illustrates the need for interdisciplinary approaches to the study of the environment. It also alludes to formidable institutional barriers that inhibit scholarship of this type. These problems are universal; China offers only one example.

During the past four decades, policy directives emanating from Beijing and the massive migration of Chinese from the south have changed the relationship between humans and the environment in northern China. The changes include the expansion of farming into former grazinglands and alteration of the traditional pastoral livestock-based socioeconomic system, first to collectivized agriculture, and more recently toward privatization with individual

responsibility for land and livestock. These relatively rapid political, social and economic changes have shaken previously-existing relations among people, land and livestock. The results include ethno-cultural difficulties as well as severe environmental degradation in many parts of China's rangelands. Today, the grasslands of northern China are in a state of social, economic and environmental flux, and it is not clear when or how a more sustainable land use pattern will emerge. The Chinese scientific establishment is attempting to analyze the ecosystems of China and the changes occurring in them, to absorb new scientific technologies and approaches, including systems science and ecological modeling, and to overcome entrenched institutional barriers to integrated, interdisciplinary research and policy making—all at the same time! We hope that this report, by documenting the on-going environmental crisis and the admirable efforts of Chinese scientists to deal with it, will in some small way encourage expanded cooperation among scientists who are working toward solutions for this and similar problems around the world.

This report was written during a period of increased tensions between the United States and China. Nevertheless, a strong cooperative spirit prevailed among Chinese and American scientists, whose shared commitment was not diminished by political problems. Our Chinese colleagues treated us kindly and made significant contributions to all phases of the enterprise. Principal support was provided by the Chinese Academy of Sciences (CAS). CAS vice president, Dr. Sun Honglie, and the CAS Bureau of International Cooperation, led by Mr. Cheng Erjin, put us in touch with all of the major grassland scholars in China and helped arrange visits to their research institutes and field stations. Unfortunately, we cannot name all of the scientists, administrators and others who welcomed and introduced us to the 22 institutions we visited in gathering information for this report, but I do want to acknowledge the special efforts of Dr. Zhang Xinshi, director of the Institute of Botany; Dr. Chen Zuozhong, director of the Inner Mongolian Grassland Ecosystem Research Station; Dr. Zhao Shidong, associate director of the Shenyang Institute of Applied Ecology; and Mr. Li Yutang, chief of the Grassland Division of the Ministry of Agriculture. The knowledge and experience of all our Chinese colleagues and their continuing interest in this study contributed much to its success.

Important contributions to this report were also made by Orie Loucks, Ma Rong, George Schaller, Wan Changgui, Arthur Waldron, Wang Zhigang, Wu Jianguo, and Tian Shuning, whose work appears below. Members of the Grassland Study Review Panel appointed by the National Academy of Sciences evaluated these various contributions, provided comments and insights on key issues raised by researchers in China, and reviewed and approved the report that follows.

If this report makes a useful contribution to science and to improved communication between U.S. and Chinese scientists, that success will be due in

large part to the efforts of the director of the CSCPRC, Dr. James Reardon-Anderson, and his staff, particularly Ms. Beryl Leach. Jim Reardon-Anderson was the main source of energy and vision for this study; his persistent enthusiasm and high aspirations for cooperation between Chinese and American science infected everyone who worked on the project. He also drafted several sections and served as general editor of this report. Ms. Leach played a major role in the organization of the project and dealt with the complex logistical and diplomatic arrangements inherent in such international cooperation.

It is my pleasure as chairman of the panel that produced this report to thank everyone, named and unnamed, who helped make it possible.

Grasslands and Grassland Sciences in Northern China is the first in a series of reports on the state of science in China, produced by the Committee on Scholarly Communication with the People's Republic of China (CSCPRC) with support from the Division of International Programs of the National Science Foundation. This report was compiled by the staff of the CSCPRC and revised, amplified, and approved by the Grassland Study Review Panel, appointed by the National Academy of Sciences and composed of 10 natural and social scientists from the United States and Great Britain specializing in grassland studies. The report describes in general terms the natural ecosystem and human activities in the grasslands of northern China and in greater detail the scientific activities, including research, education, organization, funding, personnel, and science policies, related to the study of this topic. It covers Xinjiang, Qinghai, Gansu, Ningxia, Inner Mongolia, and the three provinces of the Northeast, but excludes Tibet, Sichuan, Yunnan, and other provinces and autonomous regions of China proper.

The report is divided into four parts. Part I presents an overview of the ecology, society, and land use practices in the grasslands of northern China, based on published sources and direct observations by members of the CSCPRC staff and the Grassland Study Review Panel.

ments on the orientation and approaches of Chinese scholars engaged in this research, and a comprehensive list of references. These reviews, which were written by six Chinese and one American experts on grasslands in China, represent the views of the authors and present both factual information and insights into the thinking of Chinese natural and social scientists and officials who work in this field.

Part III contains descriptions of the staff, facilities, and teaching and research programs of the universities, research institutes, and other institutions responsible for grassland studies in northern China. These descriptions are based on written materials and interview data gathered by members of the panel and CSCPRC staff during brief visits to each institution, as well as correspondence with the directors of research institutes and chairmen of university departments.

Part IV presents a discussion, drafted by individual members of the panel and approved by the panel as a whole, of key issues raised in the rest of the report. These issues include the pastoral frontier, atmosphere-biosphere interactions, social dimensions of grassland studies, desertification and degradation, management of common pool resources, rational rangeland management, conservation and wildlife, and the organization and conduct of science. Because much of the report contains information provided by Chinese scholars and officials of Chinese scholarly institutions, Part IV offers the panel an opportunity to comment on and place in larger perspective the findings of their Chinese colleagues.

Both Chinese and foreign contributors to this report make several points. First, the grasslands of northern China are a vast, rich, yet shrinking resource. Many Chinese scholars and officials responsible for work in this area believe that the process of degradation is rapid, accelerating, and caused by human intervention, particularly the extension of agriculture and overgrazing by domesticated animals, as well as natural factors such as infestation by rodents and insects. Members of the panel note some of the conceptual and methodological difficulties in judging the degree, pace, and causes of degradation and suggest that this is an important question for future research.

Second, in response to the perceived problem of degradation, much research in China has been addressed to the practical goals of protecting, restoring, and making better use of the grasslands to support the pastoral economy. Experimental efforts have included fencing, seeding, plowing, fertilizing, burning, and desalinization of grasslands; the construction of wind breaks; fixation of dunes; and methods of insect and rodent pest control.

Third, parallel to and in support of this applied research has been a program of basic research in botany, zoology, soil science, and other disciplines. Much of this work has been designed to establish baseline data on species composition, population distribution, community structure, vegetation dynamics, biomass productivity, nutrient cycling, and ecological regionalization.

Fourth, the Chinese have done less to integrate the study of China's grasslands through the introduction of new concepts such as ecosystem science, techniques such as ecosystems modeling, or interdisciplinary approaches that combine various branches of the natural and/or social sciences. Chinese and foreign observers agree that the future of Chinese grassland studies lies in the application of these concepts, techniques, and methods to the existing organization and program of research.

This report introduces the subject of China's northern grasslands and current scholarly activities in this area to readers outside China, and perhaps inside as well. The purpose is to inform and through information to encourage collaborative research and other forms of cooperation between Chinese and foreigners who share an interest in and concern for this issue. The report does not attempt to assess or evaluate Chinese scientific and scholarly activities or policies, although some judgmental statements or inferences by individual authors or the panel as a whole could not be avoided. The report reaches no conclusions and makes no recommendations.

Next: Introduction »
Grasslands and Grassland Sciences in Northern China Get This Book
× 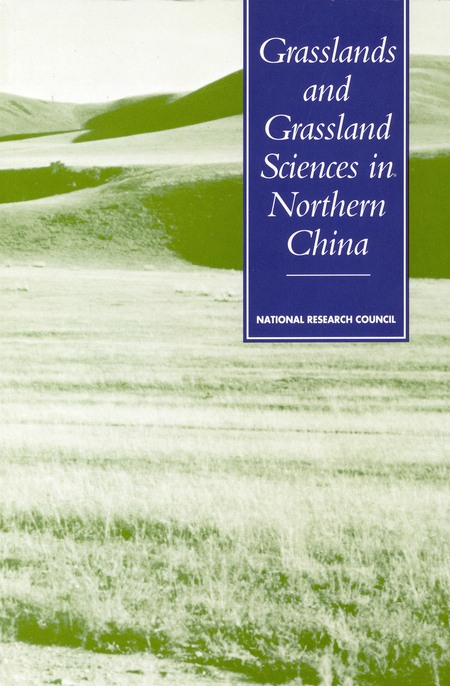 This volume describes one of the most extensive grassland ecosystems and the efforts of Chinese scientists to understand it.

Leading Chinese scientists attribute the decline in China's grasslands to overgrazing and excessive cultivation of marginal areas and discuss measures to limit the damage. The book gives its view on the Chinese approach to the study of grasslands and the relevance of this activity in China to global scientific concerns.