Get This Book
Visit NAP.edu/10766 to get more information about this book, to buy it in print, or to download it as a free PDF.
Page i Share Cite
Suggested Citation:"FRONT MATTER." National Research Council. 1993. Headline News, Science Views II. Washington, DC: The National Academies Press. doi: 10.17226/2043.
×

The National Research Council was organized by the National Academy of Sciences in 1916 to associate the broad community of science and technology with the Academy’s purposes of furthering knowledge and advising the federal government. Functioning in accordance with general policies determined by the Academy, the Council has become the principal operating agency of both the National Academy of Sciences and the National Academy of Engineering in providing services to the government, the public, and the scientific and engineering communities. The Council is administered jointly by both Academies and the Institute of Medicine. Dr. Frank Press and Dr. Robert M. White are chairman and vice chairman, respectively, of the National Research Council.

The Information Revolution. The AIDS epidemic. Space travel. In countless ways, changes involving science and technology are reshaping our lives. Computers are transforming our economy. New technology brings us everything from Scud missiles to MTV videos. Medical breakthroughs help us live longer even as global warming and atmospheric ozone depletion threaten our future.

It is nearly impossible to read through a newspaper without finding several stories involving science, technology and health care. But for many Americans, especially those without a technical background, these topics often are confusing, even intimidating. People read conflicting claims about an issue and wonder where the truth lies. They sense their lives being changed by everyone from the farmer in the Amazon to the computer hacker next door. But real understanding remains elusive, hidden in a shroud of jargon and details.

This book will help everyone — expert and non-expert alike — to make sense of some of today's most important issues involving science, technology and health care. The authors include dozens of the world's most prominent experts, writing in a readable and engaging journalistic style. The articles are similar in format to those in the first edition of Headline News, Science Views, published in 1991.

As with the first volume, the articles in this edition ap-

peared originally on the editorial and opinion pages of daily newspapers. They were distributed by the National Academy Op-Ed Service. Begun in 1983 under the auspices of the National Academy of Sciences, National Academy of Engineering, Institute of Medicine and National Research Council, the Service provides more than 300 newspapers with timely articles by scientific and technical experts. The papers receive the weekly articles free with exclusive rights within their cities. Among those that have published stories from the service are The Atlanta Constitution, The Baltimore Sun, The Boston Globe, The Chicago Tribune, The Cleveland Plain Dealer, The Detroit News, The Houston Chronicle, The Miami Herald, Newsday, The Philadelphia Inquirer, The San Francisco Chronicle and The St. Louis Post-Dispatch.

The wonderful cartoons and drawings in this volume were used by editors at subscribing newspapers. The artists and editors granted us permission to reprint the illustrations here.

The Op-Ed Service would not exist without the continued support and encouragement of the newspaper editors who have helped us bring these complex scientific and technical issues into the arena of public debate. We also are indebted to hundreds of study committee members, staff officers and others within the Academy who have shared their expertise and offered advice on story ideas. The entire staff of the Academy news office supports the Service in many ways. In particular, Stephen Push, director of the office, and Patricia Worns, the copy editor, played an invaluable role in producing the articles presented here.

Our greatest thanks is reserved for the authors, who took time out from busy schedules to prepare these articles without pay and under tight deadlines. Making the transition from scientific text to newspaper prose was not always easy, but it was made much smoother by authors whose prominence was matched by their patience, eloquence and genuine desire to reach out beyond the scientific community to the American public.

Next: 1 SCIENCE AND SOCIETY »
Headline News, Science Views II Get This Book
× 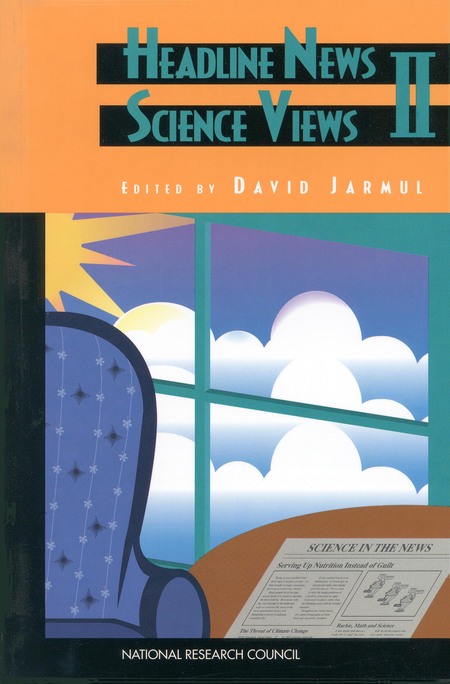 Why all the talk about biodiversity? Is malaria really making a comeback? Just what are computer viruses?

Many Americans are confused about these and other issues involving science, technology, and health care. But they lack the time or technical background to read scientific reports.

This engaging book "can be warmly recommended to card-carrying scientists and laypeople alike," New Scientist wrote about the first edition of Headline News, Science Views. "Try the opening items and say goodbye to your next couple of hours."

Now, in a completely new edition packed with 75 engaging articles, Headline News, Science Views II probes further into scientific issues behind today's headlines, issues like highway safety, global warming, industrial competitiveness, and women's health. Experts on these and other topics discuss where the problems lie and how to fix them.