Support for Forensic Science Research: Improving the Scientific Role of the National Institute of Justice (2015)

Get This Book
Visit NAP.edu/10766 to get more information about this book, to buy it in print, or to download it as a free PDF.
Page i Share Cite
Suggested Citation:"Front Matter." National Academies of Sciences, Engineering, and Medicine. 2015. Support for Forensic Science Research: Improving the Scientific Role of the National Institute of Justice. Washington, DC: The National Academies Press. doi: 10.17226/21772.
×

Improving the Scientific Role of the
National Institute of Justice

Committee on Strengthening Forensic Science at the
National Institute of Justice

Committee on Law and Justice

This study was supported by Contract No. 2014-IJ-CX-0113 from the U.S. Department of Justice/National Institute of Justice. Any opinions, findings, conclusions, or recommendations expressed in this publication are those of the author(s) and do not necessarily reflect the views of the organizations or agencies that provided support for the project.

Copyright 2015 by the National Academy of Sciences. All rights reserved.

The National Academy of Sciences was established in 1863 by an Act of Congress, signed by President Lincoln, as a private, nongovernmental institution to advise the nation on issues related to science and technology. Members are elected by their peers for outstanding contributions to research. Dr. Ralph J. Cicerone is president.

The three Academies work together as the National Academies of Sciences, Engineering, and Medicine to provide independent, objective analysis and advice to the nation and conduct other activities to solve complex problems and inform public policy decisions. The Academies also encourage education and research, recognize outstanding contributions to knowledge, and increase public understanding in matters of science, engineering, and medicine.

Learn more about the National Academies of Sciences, Engineering, and Medicine at www.national-academies.org.

COMMITTEE ON STRENGTHENING FORENSIC SCIENCE
AT THE NATIONAL INSTITUTE OF JUSTICE

ALAN I. LESHNER (National Academy of Medicine) (Chair), American Association for the Advancement of Science (ret.)

KATHI GRASSO, Director, Committee on Law and Justice (from July 2015)

COMMITTEE ON LAW AND JUSTICE

DANIEL B. PRIETO, Cybersecurity and Technology, U.S. Department of Defense

The ability to analyze and interpret criminal justice evidence accurately is central to the effective functioning and credibility of every democratic country’s justice system, and there is a constant need to keep improving both the accuracy and reliability of forensic analytic techniques, known as forensic science. The best way to meet that need is through bringing the full power of scientific research to bear on forensic science questions and methods. Within the federal government, a variety of agencies both conduct and support research on or related to forensic science, but there is little strategic coordination or leadership among them. The consequences include unmet needs, even in the face of at times unnecessary redundancies, and missed opportunities. This is a persistent problem, mentioned by two earlier National Research Council reports and by virtually every official who interacted with this committee. Although this issue is outside the purview of this committee’s work, we believe it urgently needs to be addressed.

This report is the third time in the past 6 years that the National Academies of Sciences, Engineering, and Medicine have been asked to examine, directly or indirectly, the quality of and ways to strengthen federal leadership of forensic science research. The first two reports that discussed forensic science research were Strengthening Forensic Science in the United States: A Path Forward and Strengthening the National Institute of Justice. Because the three reports have different foci, their sets of recommendations differ in their details, but all three share some conclusions and recommendations. Importantly, they all agree that the National Institute of Justice should be providing greater leadership for this scientific domain but that it

cannot do so unless (1) it also has full freedom to set its research agenda and (2) its agenda accurately reflects the gaps in scientific knowledge as perceived by the researchers themselves, as well as the major problems encountered by the forensic science practice community. This report recommends specific steps that should be taken to achieve these goals. Moreover, the National Institute of Justice must have both financial and human resources that are adequate to implement the tasks with which it has been charged. Unfortunately, the recommendations of the previous reports have been only partially implemented. We hope that the recommendations in this report will be followed more closely.

I wish to express my deep appreciation to the members of the committee for their diligent and dedicated contributions to this study and to the preparation of this report within an expedited time frame. The diverse expertise and experience offered by the members of the committee were indispensable to the formulation of the conclusions and recommendations. I also wish to thank, on behalf of the entire committee, the Academies staff whose expertise and skill were absolutely essential to our meeting the charge.

Although the reviewers listed above have provided many constructive comments and suggestions, they were not asked to endorse the conclusions or recommendations nor did they see the final draft of the report before its release. The review of this report was overseen by the monitor, Ron Brookmeyer (National Academy of Medicine), Department of Biostatistics, University of California, Los Angeles, and coordinator, John Rolph, Department of Statistics (emeritus), University of Southern California. Appointed by the Academies, they were responsible for making certain that an independent examination of this report was carried out in accordance with institutional procedures and that all review comments were carefully considered. Responsibility for the final content of this report rests entirely with the authoring committee and the institution.

The committee is grateful to the staff of the National Institute of Justice for their active participation throughout the study. The committee also applauds the National Academies of Sciences, Engineering, and Medicine’s staff members—Emily Backes, Leticia Garcilazo Green, Malay Majmundar, Julie Schuck, and Daniel Talmage—for their dedication to the study and for their great contributions to the preparation of this report. And finally, we thank the executive office reports staff of the Division of Behavioral and Social Sciences and Education, especially Robert Katt (consultant editor), who provided valuable help with editing the report, and Kirsten Sampson Snyder, who managed the report review process. Without the Academies’ guidance and wise counsel, the committee’s job would have been even more difficult, if not impossible.

Organization of the Report

2 FORENSIC SCIENCE IN THE UNITED STATES

3 RESEARCH OPERATIONS OF THE NATIONAL INSTITUTE OF JUSTICE

Building the Infrastructure for the Field

4 FORENSIC SCIENCE RESEARCH AT NIJ: A BLUEPRINT FOR THE FUTURE

3-2 Funding for NIJ applicable to forensic science, fiscal 2009-2014, in millions of dollars

2-1 Percentage of Publicly Funded Forensic Crime Laboratories with Resources Dedicated to Research, by Type of Jurisdiction and Staff Size, 2002 and 2009

2-2 Forensic Services Backlogs and the Need for Research

4-1 Elements of a Research and Development Strategic Plan

4-2 Examples of Output and Outcome Measures

Next: Summary »
Support for Forensic Science Research: Improving the Scientific Role of the National Institute of Justice Get This Book
× 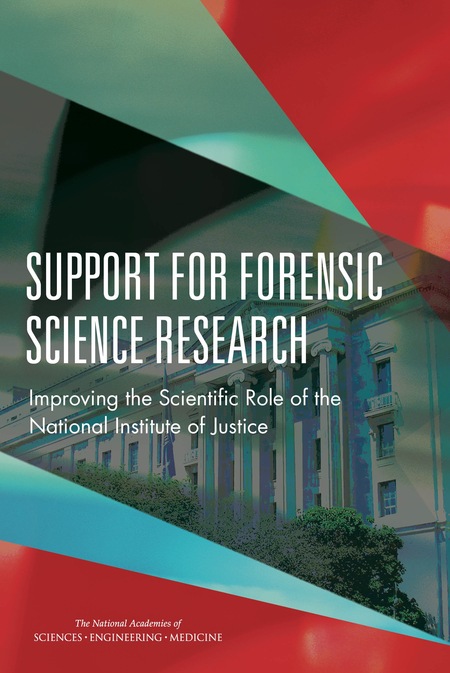 Reliable and valid forensic science analytic techniques are critical to a credible, fair, and evidence-based criminal justice system. There is widespread agreement that the scientific foundation of some currently available forensic science methods needs strengthening and that additional, more efficient techniques are urgently needed. These needs can only be met through sustained research programs explicitly designed to ensure and improve the reliability and validity of current methods and to foster the development and use of new and better techniques. This task is challenging due to the broad nature of the field.

Concerns have been raised repeatedly about the ability of the criminal justice system to collect and analyze evidence efficiently and to be fair in its verdicts. Although significant progress has been made in some forensic science disciplines, the forensic science community still faces many challenges. Federal leadership, particularly in regard to research and the scientific validation of forensic science methods, is needed to help meet the pressing issues facing state and local jurisdictions.