Get This Book
Visit NAP.edu/10766 to get more information about this book, to buy it in print, or to download it as a free PDF.
« Previous: A-- INFORMATION REGARDING THE LEGISLATION DIRECTING THE STUDY
Page 25 Share Cite
Suggested Citation:"B-- VA AND DOD REPORTS." National Academies of Sciences, Engineering, and Medicine. 2015. Considerations for Designing an Epidemiologic Study for Multiple Sclerosis and Other Neurologic Disorders in Pre and Post 9/11 Gulf War Veterans. Washington, DC: The National Academies Press. doi: 10.17226/21870.
×

This appendix describes reports by the Department of Veterans Affairs (VA) and the Department of Defense (DOD). These include the VA utilization reports and surveys conducted by the VA’s Office of Public Health and the DOD Medical Surveillance Monthly Report (MSMR).

VA releases utilization reports that are updated quarterly. The reports are created by linking the DOD’s Defense Manpower Data Center (DMDC) deployment roster files of returning OEF/OIF/OND8 veterans to the VA’s administrative inpatient and outpatient record files. The DOD deployment roster file contains a complete list of separated veterans who have left the theater of operations through November 2014 (for the latest report); the file does not contain a code to distinguish between OEF, OIF, or OND veterans (VA, 2015). Results are presented as cumulative totals that display the number of unique veterans with primary diagnoses or diagnoses in any position by the International Classification of Diseases Ninth Revision, Clinical Modification (ICD-9-CM) codes that are obtained from veterans’ medical records, from care received at a VA facility (excluding care receive at a Vet Center). Patient records are not reviewed and diagnoses are not confirmed for utilization reports. A veteran can have multiple diagnoses with each health care encounter, and therefore, may be counted in multiple categories, but the person is counted only once in any single diagnostic category. The utilization reports represent only those OEF/OIF/OND veterans using VA health care (approximately 60% or 1,158,359 veterans) since October 1, 2001. Thus, the data in the reports do not represent all 1,906,754 OEF/OIF/OND veterans who have become eligible for VA health care or the approximately 2.7 million service members (as of December 31, 2014) who have served or are currently serving in the Afghanistan and Iraq theaters of operations (VA, 2015).

VA conducted three waves of a longitudinal survey of 1990-1991 Gulf War veterans. There are 30,000 Gulf War veterans (15,000 deployed and 15,000 era9 veterans) included in the survey known as the National Health Survey of Gulf War Era Veterans and Their Families (NHS). Additionally, there is another similarly designed survey that focuses on the health outcomes of OEF/OIF veterans (National Health Study for a New Generation of US Veterans, or “NewGen”). The first wave of the NHS was conducted in 1993-1995 (Kang et al., 2000) and with physical examinations in 1999-2001 (Eisen et al., 2005). The second wave was conducted in 2003-2005 (Kang et al., 2009), and the third wave was conducted in 2012-2013 (Bossarte, 2015). The NHS was mandated by Public Law 103-446 to be a major population-based study of US veterans and to estimate the prevalence of symptoms and other health outcomes in Gulf War deployed versus era veterans. VA presented results from the three NHS survey waves at the committee’s first meeting (Bossarte, 2015), some of which have been published (Kang et al., 2000, 2009; Li et al., 2011).

The study population was selected using a stratified random sample of 15,000 deployed and 15,000 Gulf War era veterans identified by the DMDC and selected from the larger population of approximately 694,000 Gulf War deployed and 800,000 Gulf War era veterans (Kang et al., 2000). Women, National Guard, and reserve service members were oversampled, resulting in a study population that was approximately 20% women, 25% National Guard, and 33% reserves. Each survey wave was administered by mail or computer-assisted telephone interviewing software to those persons who did not respond to the mailed survey. The same cohort of 30,000 was contacted for each survey (Kang et al., 2009). A random sample of respondents (range 1,000-4,200 depending on the wave) were asked to consent to a medical record review that focused on clinic visits and hospitalizations to verify selected self-reported outcomes in the survey. Kang et al. (2000) reported that there was strong correlation between self-reported symptoms, conditions, and reasons for hospitalizations and clinic visits; however, no numbers or statistics were presented.

The baseline 16-page structured health questionnaire included a 48-question symptom inventory (somatic and psychologic symptoms, including severity and time of onset), items on potential environmental risk factors, confounders such as smoking and alcohol use, measures of functional impairment, and medical history (VA, 1995). The overall response rate was 70%; a total of 11,441 (75%) deployed and 9,476 (64%) Gulf War era veterans participated in the study; 15,817 veterans responded to the questionnaire and 5,100 responded to the telephone interview (Kang et al., 2000).

Wave 2 of the NHS, the first follow-up study, took place 10 years after the baseline, it had a 34% response rate (40% deployed veterans and 27% era veterans). The wave 2 survey questionnaire was modified from the baseline version and again collected information about the presence of various symptoms, functional status, health perceptions, chronic medical conditions (self-report of provider diagnoses), mental health disorders, health care utilization, and potential confounders such as the use of alcohol and cigarettes. No questions on environmental exposures

9Era veterans typically are defined as nondeployed veterans or veterans deployed elsewhere during the study period.

were included. The questionnaire contained questions from validated self-report assessments, including the Patient Health Questionnaire modules for depression, somatic symptoms, anxiety, and alcohol abuse that could be applied to diagnostic algorithms (Kang et al., 2009; VA, 2005).

Wave 3 of the NHS was conducted in 2015 and had a response rate of 50% (57% deployed, 43% era veterans). Results have not been published, but VA presented an overview of methods and preliminary findings to the committee (Bossarte, 2015). The wave 3 questionnaire was modified from the earlier versions and again collected information about the presence of various symptoms such as headaches and memory problems; functional status; activity limitations; health perceptions; chronic medical conditions (self-report of provider diagnoses); mental health disorders; health care utilization; medications; and potential confounders such as the use of alcohol and cigarettes. No questions on environmental exposures were included (VA, 2012).

National Health Study for a New Generation of US Veterans (NewGen)

NewGen was designed to follow and periodically survey a population of randomly selected OEF and OIF veterans (30,000 deployed and 30,000 era veterans) for 10 years. To be eligible for the study, veterans had to either have been deployed between October 2001 and June 2008 or have served in the military during this period but not deployed. Women were oversampled to comprise 20% of the study population. Using a tiered design, respondents could complete the survey online, use a paper-based form, or by computer-assisted telephone interviewing software for persons who did not respond to the mailed survey, resulting in a 34.4% response rate (49% online; 45% paper; 6% computer-assisted telephone interview) (Eber et al., 2013). Nearly 30% of the selected population could not be located.

The Armed Forces Health Surveillance Center (AFHSC) issues a monthly report and an annual summary (both since 1995) of morbidity outcomes attributable to various illnesses and injuries. The surveillance population consists of all individuals who served on active duty within any branch from January 1 through December 31 of a given year. The MSMR provides evidence-based estimates of the incidence, distribution, impact, and trends of illness and injuries among US military members and associated populations. Most reports in the MSMR are based on summaries of medical administrative data that are routinely provided to the AFHSC and integrated into the Defense Medical Surveillance System for health surveillance purposes. All medical encounters (both inpatient and outpatient) are included and primary diagnosis is used to summarize ICD-9-CM categories of conditions. In 2014, there were more than 72,500 hospitalizations and 19.4 million ambulatory visits.

Next: C-- SUMMARY TABLE »
Considerations for Designing an Epidemiologic Study for Multiple Sclerosis and Other Neurologic Disorders in Pre and Post 9/11 Gulf War Veterans Get This Book
× 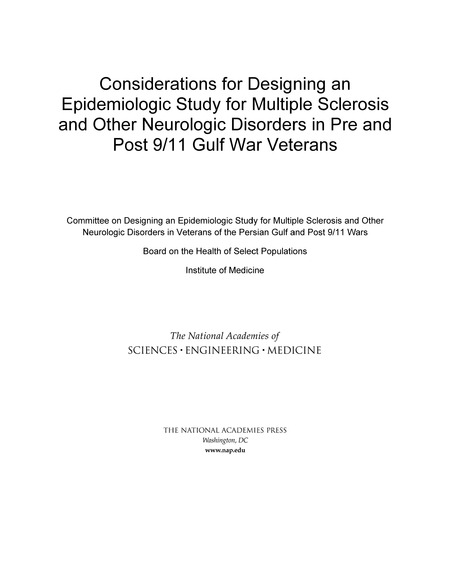 In January 2015, the Institute of Medicine conducted a study to determine the incidence and prevalence, as well as the risk of developing multiple sclerosis (MS) and other neurologic diseases as a result of service in the 1990-1991 Persian Gulf and post 9/11 Global Operations theaters. The other neurologic diseases to be considered include: Parkinson’s disease, and brain cancers, as well as central nervous system abnormalities that are difficult to precisely diagnose. This report presents the committee’s data collection and findings.