A Biological Survey for the Nation (1994)

Get This Book
Visit NAP.edu/10766 to get more information about this book, to buy it in print, or to download it as a free PDF.
Page i Share Cite
Suggested Citation:"FRONT MATTER." National Research Council. 1994. A Biological Survey for the Nation. Washington, DC: The National Academies Press. doi: 10.17226/2243.
×

A BIOLOGICAL SURVEY FOR THE NATION

Committee on the Formation of the National Biological Survey

Commission on the Formation of the National Biological Survey

This study by the National Research Council's Virtual Commission on the Formation of the National Biological Survey was sponsored by Department of the Interior contract 14-48-0009-93-013,

Cover: Partly inspired by the cover design of the 1988 book Biodiversity (E.O. Wilson, ed.) published by the National Academy Press, the illustration suggests, through a simple design, the complex interrelationships of human civilization and the rest of the biosphere.

COMMITTEE ON THE FORMATION OF THE NATIONAL BIOLOGICAL SURVEY

COMMISSION ON THE FORMATION OF THE NATIONAL BIOLOGICAL SURVEY

The National Academy of Sciences is a private, non-profit, self-perpetuating society of distinguished scholars engaged in scientific and engineering research, dedicated to the furtherance of science and technology and to their use for the general welfare. Upon the authority of the charter granted to it by the Congress in 1863, the Academy has a mandate that requires it to advise the federal government on scientific and technical matters. Dr. Bruce M. Alberts is president of the National Academy of Sciences.

The National Research Council was organized by the National Academy of Sciences in 1916 to associate the broad community of science and technology with the Academy's purposes of furthering knowledge and advising the federal government. Functioning in accordance with general policies determined by the Academy, the Council has become the principal operating agency of both the National Academy of Sciences and the National Academy of Engineering in providing services to the government, the public, and the scientific and engineering communities. The Council is administered jointly by both Academies and the Institute of Medicine. Dr. Bruce M. Alberts and Dr. Robert M. White are chairman and vice chairman, respectively, of the National Research Council.

The Department of the Interior has begun the process of forming a new agency, the National Biological Survey (NBS). As described by Secretary of the Interior Bruce Babbitt:

An important distinction exists between the ordinary use of the word survey and its use in National Biological Survey. Confusion about the meaning of the word sometimes arises in discussions about the NBS, and it is worthwhile to clarify the difference between the two at the outset. The NBS will be a new administrative entity in the Department of the Interior (DOI). Formed from a reorganization of programs in DOI, it will have responsi-

bilities for inventorying, mapping, and monitoring biotic resources; performing basic and applied research on species, groups of species, populations, and ecosystems; and providing the scientific support and technical assistance needed for management and policy decisions in DOI. Thus, it includes far more than the inventorying and mapping functions that the use of the word survey might imply.

The idea of a national biological survey has a long history in the United States, beginning with the formation of the Division of Biological Survey in the Department of Agriculture at the end of the last century. After that division was transferred to DOI in 1939 and made part of the U.S. Fish and Wildlife Service, the survey component gradually declined. But with concerns over loss of habitats and species and calls for more effective regional land management, professional organizations, nongovernment organizations, individual scientists, and members of Congress have increasingly called for a new biological survey.

The committee worked from March to September 1993. Its timetable was designed to accommodate the schedule that DOI set for administratively establishing the NBS. The committee was charged with addressing issues related to the scope and direction of the NBS embodied in the following questions:

It is important to note that the charge did not include a study of the question of whether or not the NBS should exist on a detailed evaluation of DOI's specific proposal, but rather the scope and direction of NBS in the context of the larger national picture. In developing answers to those questions, the committee considered a wide range of current and potential elements of a survey appropriate to the Department of the Interior and other locations. Many of the activities of a national biological survey—such as basic and applied research, monitoring, inventory, and information management—are going on, not only in DOI but in other federal agencies, such as the U.S. Forest Service, the National Oceanic and Atmospheric Administration, the Environmental Protection Agency, the National Science Foundation, the National Aeronautics and Space Administration, and the Department of Defense. Many of the activities occur in state agencies, state biological surveys, universities, museums (including the Smithsonian Institution), and private organizations, such as The Nature Conservancy's Heritage Programs, which maintain inventory databases in state offices throughout the country. There are also a number of international efforts, such as the World Conservation Monitoring Center in England, and national efforts, such as the Australian ABRS-ERIN (Australian Biological Resources Study-Environmental Resources Information Network) complex and the biodiversity institutes in Taiwan, Mexico (CONABIO, Comisión

During its inquiries and deliberations, the committee discovered a wide range of national needs, a broad distribution of relevant efforts and resources already occurring in federal and nonfederal organizations in a relatively uncoordinated fashion, and a wide range of management needs within the Department of the Interior. These findings, combined with the short time available to examine these programs and needs in preparation for this report, led the committee to conclude that it would be more effective in fulfilling Secretary Babbitt's wish that its work help provide a vision for the National Biological Survey if it approached the first two questions above in the context of the broader needs, opportunities, and activities as they related to the stated goals of the NBS rather than concentrating on the details of its proposed structure or specific research agenda, except to the extent that such an examination seemed essential to deal with the broader issues.

This report proposes a research agenda for the National Biological Survey that is far broader than the existing research effort in the Department of the Interior but that is also focused and has priorities according to likely immediate and long-term user needs. A National Biotic Resources Information System is envisioned to make reliable biological information more accessible to diverse users. The report also describes how the many public and private entities involved in current research on biological resources can work together in a new entity, which the committee has called the National Partnership for Biological Survey, to provide comprehensive information that will be useful for decision-makers at all levels of government and outside government. The recommendations of this committee, if followed, should provide the United States with a framework for making decisions about the management, use, and protection of its biological resources.

While this report represents the work of the committee, it benefited greatly from the support of professional staff from the National Research Council: Eric Fischer, who helped the com-

mittee refine the report, and Deborah Stine who contributed to the preparation and administrative organization of the study. Their resumes are included with those of the panel in Appendix B because of their intellectual contributions, which advanced the committee's efforts throughout the study. The report was greatly improved by the diligent work of its editor, Norman Grossblatt. In addition, invaluable support was provided by Paulette Adams, Robin Harp, Karen Plaut, and Helene Mokhiber.

The panel also acknowledges with appreciation presentations made at meetings of the committee by the following persons:

Bruce Babbitt, Secretary of the Interior

George Frampton, Department of the Interior

Thomas Lovejoy, Science Advisor to the Secretary of the Interior

Next: CONTENTS »
A Biological Survey for the Nation Get This Book
× 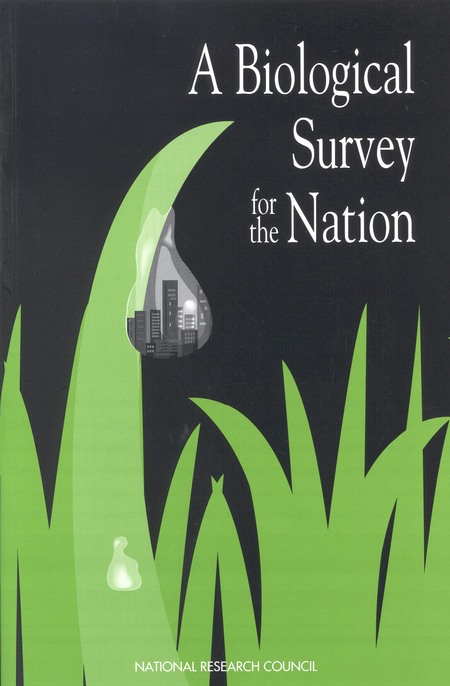 Our country has long recognized the importance of its biological resources but we often lack sufficient scientific knowledge to make wise decisions. This realization has led to calls for new ways of providing this information, including the formation of a national biological survey. This volume discusses key issues and problems for which an improved assessment of the nation's biological resources is needed; the kinds of efforts in research and information management needed to create that assessment; and how government, private organizations, and individuals can work together to meet the needs identified. Policymakers, resource managers, public interest groups, and researchers will find this book useful as they participate in the national dialogue on this topic and take actions to implement the needed survey activities.