Get This Book
Visit NAP.edu/10766 to get more information about this book, to buy it in print, or to download it as a free PDF.
« Previous: Front Matter
Page 1 Share Cite
Suggested Citation:"Foreword." National Research Council. 1996. Lost Crops of Africa: Volume I: Grains. Washington, DC: The National Academies Press. doi: 10.17226/2305.
×

Africa has more native cereals than any other continent. It has its own species of rice, as well as finger millet, fonio, pearl millet, sorghum, tef, guinea millet, and several dozen wild cereals whose grains are eaten from time to time.

This is a food heritage that has fed people for generation after generation stretching back to the origins of mankind. It is also a local legacy of genetic wealth upon which a sound food future might be built. But, strangely, it has largely been bypassed in modern times.

Centuries ago, dhows introduced rice from Asia. In the 1500s, Portuguese colonists imported maize from the Americas. In the last few decades wheat has arrived, courtesy of farmers in the temperate zones. Faced with these wondrous foreign foods, the continent has slowly tilted away from its own ancient cereal wealth and embraced the new-found grains from across the seas.

Lacking the interest and support of the authorities (most of them non-African colonial authorities, missionaries, and agricultural researchers), the local grains could not keep pace with the up-to-the-minute foreign cereals, which were made especially convenient to consumers by the use of mills and processing. The old grains languished and remained principally as the foods of the poor and the rural areas. Eventually, they took on a stigma of being second-rate. Myths arose—that the local grains were not as nutritious, not as high yielding, not as flavorful, nor as easy to handle. As a result, the native grains were driven into internal exile. In their place, maize, a grain from across the Atlantic, became the main food from Senegal to South Africa.

But now, forward-thinking scientists are starting to look at the old cereal heritage with unbiased eyes. Peering past the myths, they see waiting in the shadows a storehouse of resources whose qualities offer promise not just to Africa, but to the world.

Already, sorghum is a booming new food crop in Central America. Pearl millet is showing such utility that it is probably the most promising new crop for the United States. Nutritionists in a dozen or more

countries see finger millet and some sorghums as the key—finally—to solving Africa's malnutrition problem. Food technologists are finding vast new possibilities in processes that can open up vibrant consumer markets for new and tasty products made from Africa's own grains. And engineers are showing how the old grains can be produced and processed locally without the spirit-crushing drudgery that raises the resentment of millions who have to grind grain every day.

That, then, is the underlying message of this book. It should not be seen as an indictment of wheat, maize, or rice. Those are the world's three biggest crops, they have become vital to Africa, and they deserve even more research and support than they are now getting. But this book, we hope, will open everyone's eyes to the long-lost promise inherent in the grains that are the gifts of ancient generations. Dedicated effort will open a second front in the war on hunger, malnutrition, poverty, and environmental degradation. It will save from extinction the foods of the forebears. And it just might bring Africa the food-secure future that everyone hopes for but few can now foresee.

Next: Introduction »
Lost Crops of Africa: Volume I: Grains Get This Book
× 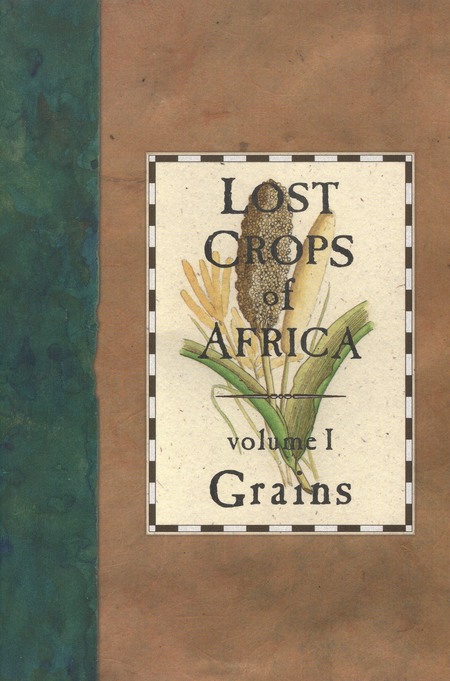 Scenes of starvation have drawn the world's attention to Africa's agricultural and environmental crisis. Some observers question whether this continent can ever hope to feed its growing population. Yet there is an overlooked food resource in sub-Saharan Africa that has vast potential: native food plants.

When experts were asked to nominate African food plants for inclusion in a new book, a list of 30 species grew quickly to hundreds. All in all, Africa has more than 2,000 native grains and fruits—"lost" species due for rediscovery and exploitation.

This volume focuses on native cereals, including:

This readable and engaging book dispels myths, often based on Western bias, about the nutritional value, flavor, and yield of these African grains.

Designed as a tool for economic development, the volume is organized with increasing levels of detail to meet the needs of both lay and professional readers. The authors present the available information on where and how each grain is grown, harvested, and processed, and they list its benefits and limitations as a food source.

The authors describe "next steps" for increasing the use of each grain, outline research needs, and address issues in building commercial production.

Sidebars cover such interesting points as the potential use of gene mapping and other "high-tech" agricultural techniques on these grains.

This fact-filled volume will be of great interest to agricultural experts, entrepreneurs, researchers, and individuals concerned about restoring food production, environmental health, and economic opportunity in sub-Saharan Africa.