Get This Book
Visit NAP.edu/10766 to get more information about this book, to buy it in print, or to download it as a free PDF.
« Previous: ROBERT PRICE
Page 238 Share Cite
Suggested Citation:"ALLEN E. PUCKETT." National Academy of Engineering. 2016. Memorial Tributes: Volume 20. Washington, DC: The National Academies Press. doi: 10.17226/23394.
× 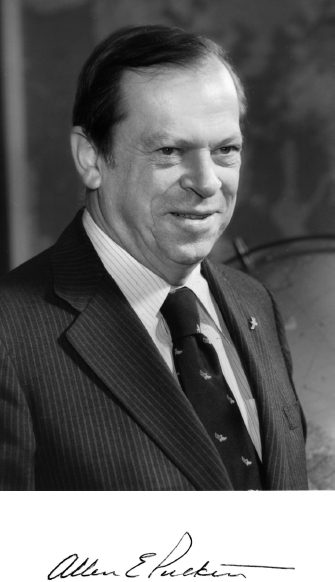 ALLEN E. PUCKETT, pioneering aerospace engineer and chairman emeritus of Hughes Aircraft Company, died on March 31, 2014, surrounded by his family in his home in Pacific Palisades, California. He was 94.

Allen led the Hughes Aircraft Company’s growth to the forefront of the country’s defense electronics, telecommunications, and space industry. After retiring in 1985, he continued to contribute to the profession as a lifetime trustee at the University of Southern California (USC).

Born July 25, 1919, in Springfield, Ohio, Allen enrolled at Harvard University at age 16. In the summer between his freshman and sophomore years he worked as a ranch hand at his cousin’s ranch in Montana, an experience he credited with changing his life and fostering a lifelong love of the outdoors and horsemanship.

While working at the Guggenheim Aeronautical Laboratory at Caltech, Allen helped design a new supersonic wind tunnel, the first of its kind in the country. Later, he produced the

calculations that led to the development of delta wing theory, which predicts the aerodynamics of supersonic aircraft and continues to be applied in the production of modern aircraft. This work formed the basis for his landmark PhD thesis, “Supersonic Wave Drag of Thin Airfoils.”

When the United States entered World War II Allen received orders to report for duty, but shortly before he was scheduled to leave for flight training he learned that he had been discharged from the Army Air Corps. Unbeknownst to him, von Kármán had written directly to the secretary of war, making the case that Puckett would be much more valuable to the war effort by continuing his research at Caltech.

In addition to many influential technical papers, Allen cowrote the seminal textbook Introduction to Aerodynamics of a Compressible Fluid with Caltech professor Hans Liepmann and coedited Guided Missile Engineering with Simon Ramo. Allen’s name became a familiar one to those of us who studied these works. He had made his mark in academia, and he was just 30 years old.

After Allen completed his PhD in aeronautics in 1949, Ramo recruited him to build the aerodynamics department at the fledgling Hughes Aircraft Company. He joined the firm that year and, over the course of his nearly four-decade tenure at Hughes, rose steadily through the ranks, eventually becoming president in 1977 and CEO and chairman of the board in 1978.

One of his most valuable contributions came in the mid-1950s when Howard Hughes created the Howard Hughes Medical Institute (HHMI), endowing it with all the shares of the company. Without the possibility of employee equity participation, many, including Ramo, left to strike out on their own in a well-chronicled exodus. The Defense Department threatened to cancel all of its contracts if the management turmoil was not resolved. The still young Allen held his team together and took the initiative to recruit and propose the seasoned engineering executive L.A. (“Pat”) Hyland to lead the company. After some hesitation, Howard Hughes agreed. Together, Hyland, as general manager, and Allen, as technical

leader, stabilized the company and set the standards for the rest of its life. When Hyland retired and announced Allen as successor, he good-humoredly remarked that Allen had displayed uncommon acumen when he hired his boss.

By now Allen had shifted his focus to the burgeoning field of electronics and was a primary force in establishing the company’s status as the country’s leading defense electronics supplier. Hughes equipment could be found on virtually every air, land, sea, and space vehicle in the US and NATO inventory and in every air defense and communications installation. The ubiquitous laser was pioneered in the company’s research laboratory.

Allen also promoted the development of the first geosynchronous satellite, which relayed live television coverage of the 1964 Tokyo Olympics, marking the first time the Games could be seen in real time on several continents. He encouraged the company’s rise to the forefront of worldwide commercial satellite sales. And he oversaw Hughes’ deployment of the country’s largest private fleet of satellites, providing service that enabled the growth of the US cable television industry. (Hughes’ later creation of DIRECTV was a natural extension of this effort.) For his crucial contributions to geostationary communication satellites Allen received the National Medal of Technology, the nation’s highest honor for technological achievement, in 1985.

Under his leadership, Hughes also participated in the National Aeronatics and Space Administration’s Surveyor program, constructing unmanned spacecraft that explored the feasibility of lunar landings and transmitted images of the surface of the moon back to Earth. These missions paved the way for the Apollo program. Allen later remarked that the Surveyor program was one of his most memorable and valuable accomplishments.

By the time Allen retired in 1987, Hughes had grown to more than 80,000 employees and was the largest employer in California. It had also become one of the largest technical forces in the country, employing 20,000 engineers. Under Allen’s guidance, the company established graduate and

undergraduate fellowships at major engineering schools across the country. The Hughes Fellowship Program was the largest program of its kind, and many of us in the Academy are beneficiaries.

The Hughes Aircraft Company no longer exists. It was sold by HHMI to General Motors shortly before Allen retired and has since been subdivided and resold in pieces. Of course this saddened Allen, but he derived great satisfaction in knowing that the asset he nurtured made HHMI one of the world’s largest foundations and the nation’s largest private supporter of academic biomedical research. In his nineties, he still kept track of HHMI Nobel Prize winners.

Having been elected to the USC board of trustees in 1983, Allen continued his lifelong support of education after he retired. He played an integral role in USC’s growth and development and significantly contributed to the university’s academic progress.

“Allen touched all those who work, study, and teach at USC through his insightful guidance and remarkable generosity,” said USC president C.L. Max Nikias. “Over the course of his three decades of distinguished service as a trustee, he worked to advance the vitality of our university, and his efforts continue to be felt throughout the USC community. We will all miss him very much.”

Allen remained especially committed to the advancement of the USC Viterbi School of Engineering and provided invaluable support to the school through his philanthropic giving and visionary leadership. He held a research faculty appointment in engineering and served as a member of the school’s board of councilors. In 1978 the school recognized his prowess as an industry leader by naming him the inaugural recipient of its Engineering Management Award.

“Allen was a titan of industry and a brilliant scholar who inspired all of us with his far-reaching contributions,” said Yannis C. Yortsos, dean of USC Viterbi.

In addition to his elections to the NAS and NAE, Allen was awarded the French Legion of Honor and received many other accolades. Among them were Caltech’s Distinguished

He also strove to support future generations of technological leaders and gave generously to his alma maters in support of research and scholarship. Together with his wife, Marilyn, he endowed the Allen E. and Marilyn M. Puckett Professorship in the Harvard School of Engineering and Applied Sciences. At Caltech, he established the Allen and Marilyn Puckett Professorship and provided funding for the Puckett Laboratory of Computational Fluid Dynamics.

An avid competitive yachtsman and cruising sailor, Allen participated in regattas around the world and was regarded as a legend in the sailing community. He brought his technological expertise to this arena as well, helping to develop some of the first computer programs for navigation and performance analysis.

He loved the outdoors on land as well. Over the years, he hiked extensively in the Sierra Nevada and the Swiss Alps. He was particularly proud of his summiting of California’s Mt. Whitney via the difficult “mountaineer’s route.”

As his children observed in their eulogy, “He did not climb every mountain, but he did reach for some of the highest. He was a lover of music, and an exceptionally graceful dancer. He enjoyed playing the ukulele and the saxophone, and could sing a rousing sea shanty. The number of lives he touched is truly beyond measure, and he will be deeply missed by all who knew him and those who loved him.”

By any measure, Allen lived a full and remarkably productive life. He was a consummate scholar, leader, and, above all, a gentleman. Thankfully, he was able to enjoy the fruits of his labor until late in life, and he had the comfort of leaving a thriving and loving family.

He will be remembered fondly by those of us in the Academy fortunate enough to have experienced his wise counsel, generous spirit, and friendship.

The author wishes to acknowledge the help he received from the family, Caltech, and the obituary of the University of Southern California.

Next: DENNIS M. RITCHIE »
Memorial Tributes: Volume 20 Get This Book
× 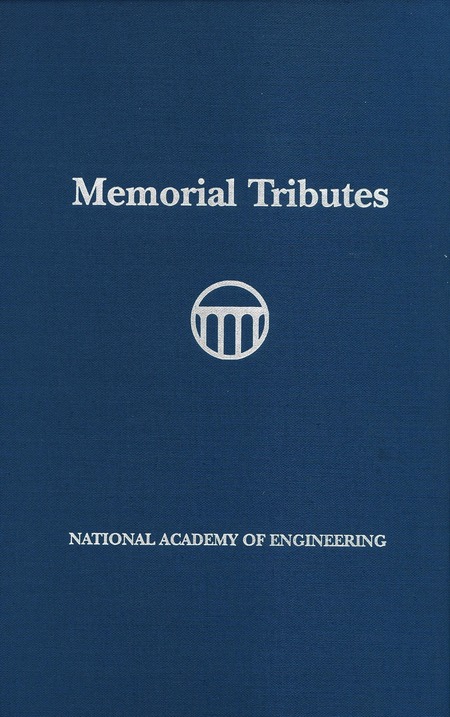