Get This Book
Visit NAP.edu/10766 to get more information about this book, to buy it in print, or to download it as a free PDF.
« Previous: 5 Economic Impact of AMO Science
Page 141 Share Cite
Suggested Citation:"6 International Perspectives in AMO Science." National Research Council. 1994. Atomic, Molecular, and Optical Science: An Investment in the Future. Washington, DC: The National Academies Press. doi: 10.17226/2357.
×

Given the importance of AMO science, it is not surprising that many nations have substantial research efforts in this area. Indeed, a recent meeting was organized by the United Kingdom's Science and Engineering Research Council to identify area of physics that would benefit from targeted funding. The four areas selected were real-time studies (sub-picosecond investigations of systems with ultrashort laser pulses), clusters, polarized electrons (which are powerful probes of atomic and surface processes), and ion-surface interactions—remarkably, each area falls in the domain of AMO science. Similarly, in Japan a number of priority areas for research have been identified, many of which involve AMO science—the atomic physics of multiply charged ions, activation of small inert molecules, theory of chemical reactions, carbon clusters, ultrafast and ultraparallel optoelectronics, and tunnelling characteristics of individual atoms.

As has been experienced in previous efforts to compare AMO science in the United States with that in other countries, the differences in infrastructures, funding methodologies, and political climates make the task of obtaining quantitative results most daunting. It is nevertheless possible to report opinions of the U.S. community and anecdotal statements of some of the leaders. Also, a citation analysis has been carried out and reported here, illustrating the relative health of U.S. AMO science as determined with that metric (see Appendix C).

In letter responses from leaders in the AMO field, it was an almost universal response that AMO science in the United States is comparable to or ahead of that in any other country, but that Germany and other Western European countries as well as Japan are moving forward rapidly, have closed gaps where they existed, and may soon move ahead. In some select areas, it was opined that the United

States already is lagging. It was especially emphasized that European Community countries and Germany in particular generally have more up-to-date and superior equipment and seem better supported. Statements like, "The last time I visited Germany, I felt like a poor relation," and "that position [of leadership] has suffered gradual and continual erosion, and we are at a point where many of the laboratories with which I am familiar are desperately short of funds to maintain and modernize their equipment," characterize many of the letter responses. Respondents to the FAMOS survey questionnaire also believe that the U.S. contribution to the total worldwide research and development effort in AMO science has decreased somewhat in the past 5 years (see Appendix D, Figures D.10a,b).

For critical technologies that are strongly impacted by AMO science, the picture is mixed. According to the U.S. Department of Commerce (DOC) Technology Administration (Emerging Technologies: A Survey of Technical and Economic Opportunities, Technology Administration, U.S. Department of Commerce, U.S. Government Printing Office, Washington, D.C., Spring 1990), Japan leads the United States in optoelectronics, advanced semiconductor devices, advanced materials, and high-density data storage. The United States leads Japan in sensor technology, medical devices and diagnostics, high-performance computing, and flexible computer-integrated manufacturing. The DOC report rates the United States ahead of Europe in all categories except digital imaging technology, a category in which the United States also lags Japan. The failure of U.S. industry to capitalize fully on the science and technology base of the country, which has been discussed widely, appears to extend to AMO science and technology as well.

The strength of the U.S. position in AMO science generally articulated by letter responses and questionnaire responses is demonstrated in an analysis of citations in the field, though the decline of leadership is not necessarily demonstrated. The citation analysis presented in Appendix C suggests that any such decrease is small. Little change is evident in the country of origin of papers citing work in AMO science over the past decade. Also, although the total number of citing papers with contributions from authors from the European Community and Japan is comparable to the number with contributions from U.S.-based authors, some 40% of the citing papers contain U.S. contributions, a figure that testifies to the strength of AMO science in the United States. The impact of the United States in AMO science was further illustrated by analyzing the origins of the most highly cited AMO papers published in 1989. Over 70% of these papers had contributions from U.S. authors. The United States is especially strong in research in rapidly evolving forefront areas. These were identified by analyzing the content of the most highly cited 1989 papers, and the examples chosen were laser cooling, diode laser development, femtosecond laser development, and C60. On average, 56% of subsequent papers in these fields that cite the original 1989 work have contributions from U.S. authors, a number that is significantly higher than the 40% typical of AMO science as a whole. It is also

interesting to note that while other countries may be particularly strong in some specific area, the United States makes a major contribution in all areas. The citation analysis suggests that the United States is very strong in emergent areas and has the flexibility and inventiveness to respond to new opportunities. The leadership role the United States plays in AMO science is also reflected in the responses to the questionnaire. On average, over 70% of respondents rated the U.S. research and development effort as strong/very strong relative to the rest of the world in the area of innovation. The ranking is not quite as high in terms of productivity, equipment, and facilities. Nonetheless, in each category significantly more respondents considered the U.S. position as strong/very strong than considered it weak/very weak.

AMO science is becoming increasingly international. Approximately 40% of respondents to the questionnaire indicated that they are involved in collaborative research and development programs with groups outside the United States. Of these, about one-half stated that they are very involved in such programs, and very few stated that they are only peripherally involved. The majority also indicated that their level of involvement has increased in the past 5 years. For highly cited papers, however, the citation analysis indicates that only about 13% of papers in AMO science contain contributions from authors in institutions in two or more countries.

Next: Appendixes »
Atomic, Molecular, and Optical Science: An Investment in the Future Get This Book
× 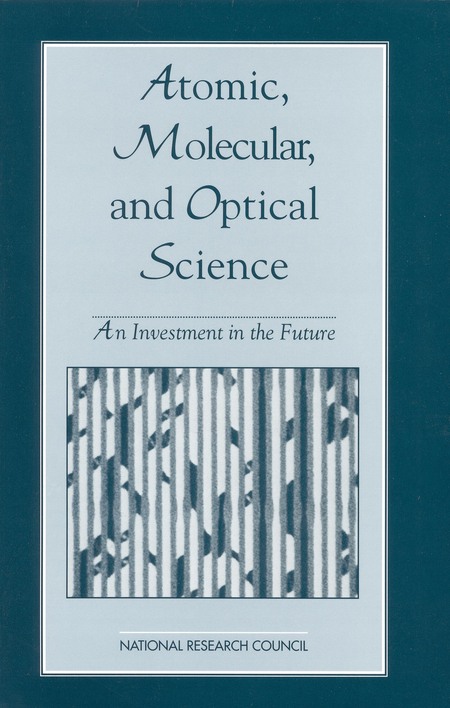