Get This Book
Visit NAP.edu/10766 to get more information about this book, to buy it in print, or to download it as a free PDF.
« Previous: Front Matter
Page 1 Share Cite
Suggested Citation:"Summary." National Academies of Sciences, Engineering, and Medicine. 2016. Science Literacy: Concepts, Contexts, and Consequences. Washington, DC: The National Academies Press. doi: 10.17226/23595.
×

Science is a way of knowing about the world. At once a process, a product, and an institution, science enables people to both engage in the construction of new knowledge as well as use information to achieve desired ends. Access to science—whether using knowledge or creating it—necessitates some level of familiarity with the enterprise and practice of science: we refer to this as science literacy.

recommendations on the need to improve the understanding of science and scientific research in the United States, and consider the relationship between science literacy and support for and use of science and research. In addition, the statement of task guiding this study asked the following questions:

CONCLUSION 1 The committee identified many aspects of science literacy, each of which operates differently in different contexts. These aspects include (but may not be limited to): (1) the understanding of scientific practices (e.g., formulation and testing of hypotheses, probability/risk, causation versus correlation); (2) content knowledge (e.g., knowledge of basic facts, concepts, and vocabulary); and (3) understanding of science as a social process (e.g., the criteria for the assignment of expertise, the role of peer review, the accumulation of accepted findings, the existence of venues for discussion and critique, and the nature of funding and conflicts of interest).

Though science literacy has been defined in many ways, the aspects highlighted above are some of the most common ideas emerging in the literature, and they represent what some scholars expect would be useful or valuable for individuals using science in their lives, interacting with science information, and making decisions related to science. When considering why science literacy itself would be valuable, some scholars emphasize a personal rationale, defining the term in the context of how science knowledge and knowledge of science can be beneficial to people in their daily lives. Indicators developed to measure science literacy have focused on creating a marker for science knowledge and differentiating between individuals’ capabilities.

CONCLUSION 2 Historically, the predominant conception of science literacy has focused on individual competence.

CONCLUSION 3 Foundational literacy (the ability to process information—oral and written, verbal and graphic—in ways that enable one to construct meaning) is a necessary but not sufficient condition for the development of science literacy.

to how the literacy demands placed on individuals by that system might be mitigated.

In light of this understanding, the committee organized its thinking about the questions posed in the charge by examining evidence at three levels of science literacy: the society, the community, and the individual. We chose this organization to contrast purposefully with the default understanding of literacy as an individual accomplishment. As a result, the committee chose to delve first into what science literacy looks like at its largest level of social organization—the society.

SCIENCE LITERACY AT THE LEVEL OF SOCIETY

There are four primary rationales for the importance of science literacy: personal, economic, democratic, and cultural. Each of them makes claims about the value of science literacy for nations and societies. Perhaps the most commonly heard claim is that a more science-literate population helps democratic societies make prudent and equitable decisions about policy issues that involve science. Currently, the available evidence does not provide enough information to draw conclusions on whether such claims are justified or not.

Research on science literacy at the level of a nation or whole society can be split into two perspectives. We refer to the first one as the aggregate perspective—empirical work that aggregates data about individuals, usually collected through large public opinion surveys or tests with samples representative of a population, and examines patterns in the whole or by groups. The vast majority of scholarly inquiry at the society level in the field of science literacy, as well as the public discourse, has focused on the aggregate perspective. We refer to the second one as the structural perspective—an alternative way to consider science literacy at the society level by examining the role of social structures. Social

structures could include (but would not be limited to) formal policies and institutions (e.g., schools and the scientific establishment) and emergent cultural properties, such as norms of political participation, social and economic stratification, and the presence of diverse groups and worldviews. There is very little research on science literacy from a structural perspective.

Currently, what is measured on science literacy at the society level comes from large public opinion surveys among adults and survey tests of adolescents in many countries. Indicators of adults’ knowledge of science are limited to a narrow range of measures on public surveys. It is difficult to draw strong conclusions on cross-national performance from these measures. However, survey responses over time have shown much stability in terms of average performance on knowledge questions, and no country for which there are data consistently outperforms other countries on all questions.

CONCLUSION 5 The population of adults in the United States performs comparably to adults in other economically developed countries on most current measures of science knowledge.

The large public opinion surveys in different countries also include measures of attitudes toward science. On these measures, there are many similarities among countries, and response trends have been stable across multiple survey years, particularly in the United States (for which there are more data). The percentage of respondents reporting positive attitudes has been (and remains) quite high, notably in regard to the perceived benefits created by science for societies and support for scientific research.

CONCLUSION 6 Current evidence, though limited, shows that populations around the world have positive attitudes toward science and support public funding for scientific research. These attitudes have been generally stable over time. In addition, the same evidence reveals an overall high level of trust in scientists and in scientific institutions.

CONCLUSION 7 Within societies, evidence shows that severe disparities in both foundational literacy and health literacy exist and are associated with structural features such as distribution of income and access to high-

SCIENCE LITERACY AT THE COMMUNITY LEVEL

Evidence from case studies suggests that science literacy can be expressed in a collective manner—i.e., resources are distributed and organized in such a way that the varying abilities of community members work in concert to contribute to their overall well-being. Science literacy in a community does not require that each individual attain a particular threshold of knowledge, skills, and abilities; rather, it is a matter of that community having sufficient shared capability necessary to address a science-related issue. Examples of such collective capability and action abound.

However, research does not yet show the extent to which communities are able to mobilize to respond to issues at a local level or what features of particular communities enable them to develop and deploy science literacy in effective ways. Evidence from case studies suggests that the success of communities is constrained by structural conditions and depends, at least in part, on the development of scientific knowledge throughout the community and the organization and composition of the community, including the strength and diversity of relationships with scientists and health professionals, scientific institutions, and health systems. The data show that particularly under-resourced communities are more susceptible to the types of environmental and health crises in which science literacy-informed community activism would be crucial, yet they often have the least access to resources that support development and use of science literacy. Additional research is needed to understand the various features and contexts that enable or prevent community science literacy and action.

The committee also finds that communities can and do contribute to new scientific knowledge in diverse and substantive ways, often in collaboration with scientists. Community involvement has helped to bring new questions to light, provide data that would otherwise be unavailable, encourage the integration of qualitative and observational data with experimental data, increase the robustness and public relevance of data collection strategies, garner political and community support for conclusions, produce new instruments and technologies,

and build community awareness and knowledge. Though the evidence describing this phenomenon is still case based, the committee finds that the creation of new scientific knowledge is a compelling demonstration of science literacy.

CONCLUSION 9 Based on evidence from a limited but expanding number of cases, communities can meaningfully contribute to science knowledge through engagement in community action, often in collaboration with scientists.

SCIENCE LITERACY AT THE INDIVIDUAL LEVEL

CONCLUSION 10 Research examining the application of science literacy and health literacy has focused on different things: studies on the impact of health literacy have looked for impact on health-related behaviors and actions (e.g., compliance with medical advice, shared decision making, etc.), whereas studies on the impact of science literacy have mostly examined its relationship to individual attitudes toward science and support for scientific research.

Attitudes have been measured by assessing the adult population’s evaluation of the social impact of science and technology. These attitudes have been further separated into two groups: a set of broad attitudes toward science and technology that reflect an individual’s assessment of the scientific research enterprise generally and a more focused set of attitudes toward specific scientific controversies, such as nuclear power, climate change, stem cell research, and genetically modified foods. Findings demonstrate that context matters when looking at the relationship between knowledge and perceptions of and support for science. Though science knowledge plays a role, many other factors influence an individual’s support for science and scientific research.

CONCLUSION 11 Available research does not support the claim that increasing science literacy will lead to appreciably greater support for science in general.

Though there appears to be a small, positive relationship between general science knowledge and general attitudes toward science, scholars have shown that this relationship becomes more complicated when assessing science knowledge and attitudes toward specific science issues. Knowledge impacts diverse sub-groups in the population differently depending on a host of factors, including levels of religiosity, political predispositions and worldviews, and scientific deference. These patterns seem to vary depending on the specific scientific issue being explored and the culture in which the data are collected. In fact, there is often an interaction between knowledge and worldviews such that enhanced knowledge has been associated, in cases of controversial issues, with increased polarization, affecting attitudes toward those specific science issues.

CONCLUSION 12 Measures of science literacy in adult populations have focused on a very limited set of content and procedural knowledge questions that have been asked within the constraints of large population surveys. Though available measures are limited in scope, evidence suggests they are reasonable indicators of one aspect of science literacy, science knowledge. Studies using these measures observe a small, positive relationship between science literacy and attitudes toward and support for science in general.

CONCLUSION 12b Some specific science issues evoke reactions based on worldviews (e.g., ideology, religion, deference to scientific authority) rather than on knowledge of the science alone.

These weak relationships suggest that efforts to simply promote knowledge and understanding to change behavior or attitudes may have limited results. Efforts should focus on increasing knowledge while also removing impediments to actions and lowering the literacy demands of particular situations.

CONCLUSION 13 The commonly used measures of science and health literacy, along with other measures of scientific knowledge, are only weakly correlated with action and behavior across a variety of contexts.

Recommendation: The committee recommends that the research community take on a research agenda that pursues new lines of inquiry around expanding conceptions of science literacy.

Next: 1 Introduction »
Science Literacy: Concepts, Contexts, and Consequences Get This Book
× 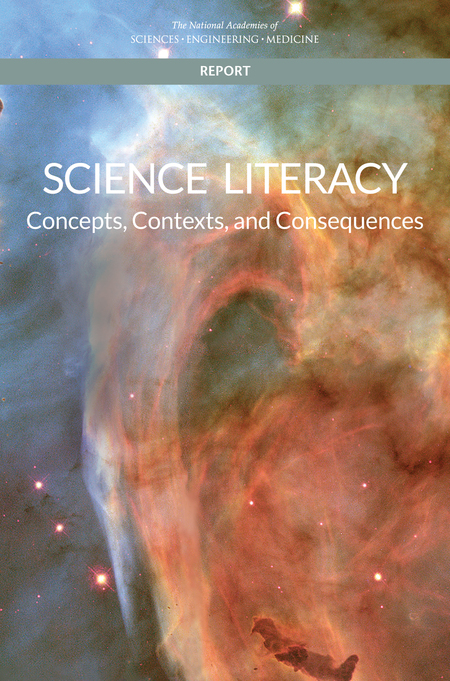 Science is a way of knowing about the world. At once a process, a product, and an institution, science enables people to both engage in the construction of new knowledge as well as use information to achieve desired ends. Access to science—whether using knowledge or creating it—necessitates some level of familiarity with the enterprise and practice of science: we refer to this as science literacy.