Chapter:2 Voting and the 2016 Presidential Election

Get This Book
Visit NAP.edu/10766 to get more information about this book, to buy it in print, or to download it as a free PDF.
« Previous: 1 Introduction
Page 23 Share Cite
Suggested Citation:"2 Voting and the 2016 Presidential Election." National Academies of Sciences, Engineering, and Medicine. 2018. Securing the Vote: Protecting American Democracy. Washington, DC: The National Academies Press. doi: 10.17226/25120.
×

Voting and the 2016 Presidential Election

Federal elections are an enormous undertaking. There are thousands of election administration jurisdictions in the United States, and in the 2016 presidential election, there were 178,217 individual precincts1 and 116,990 physical Election Day polling places.2,3 Election administration jurisdictions operated more than 8,500 locations where ballots could be cast prior to Election Day.4

1 An individual precinct is a geographic voting area to which individuals are assigned and that determine the ballot type voters receive.

2 A polling place is the location where one can vote on Election Day.

Statistics quoted in this report that rely on the EAVS reflect answers from jurisdictions that provided information to the EAC and totals, therefore, may not add up to 100 percent. The EAVS contains the most comprehensive nationwide data about election administration in the United States. It includes responses from all 50 states, the District of Columbia, and four U.S. territories. The U.S. Election Assistance Commission (EAC) administers the survey to meet its obligations under the Help America Vote Act of 2002 to serve as a national clearinghouse and resource for the compilation of information related to federal elections. Data are collected at the local level by counties or the county equivalent and include information related to voter registration; military and overseas voters; early and by mail voting; provisional voting; voter participation; voting equipment usage; and poll workers, polling places, and precincts.

ISSUES ARISING IN THE 2016 PRESIDENTIAL ELECTION

During the 2016 election, the media and citizen groups who monitor the voting process reported problems experienced at the polls, such as confusion over state requirements regarding voter identification, difficulties with polling place procedures, and faulty voting equipment. However, in responses to the “Survey of the Performance of the American Electorate,” the only large-scale academic survey devoted to election administration topics, the vast majority of voters reported that they did not encounter problems at the polls or when voting by mail.9 This does not mean that there were not problems that occurred unbeknownst to the voter. If an electronic voting machine, for example, were to change a vote after a voter had completed the voting process, the voter would be unaware of the problem and have no reason to report dissatisfaction.

In general, responses to the survey were similar to those given following the 2008 and 2012 elections. The only common problem reported in 2016 was long lines in some locations. However, the average wait times reported in 2016 were significantly less than those reported in 2012, when the issue was elevated to national prominence.

The 2016 election was distinguished by two notable developments: (1) the targeting of many states’ voter registration systems and public election websites by Russian actors; and (2) assertions by the new president that millions of individuals voted illegally. In addition, the Russian government made efforts to influence the outcome of the election through a disinformation campaign using social media and other tactics (see Appendix C).

9 Stewart, Charles III. “2016 Survey of the Performance of American Elections: Final Report,” 2017, available at: http://dx.doi.org/10.7910/DVN/Y38VIQ. Dr. Stewart is a member of the committee that authored the current report.

In the summer of 2016, as election administrators were preparing for the upcoming presidential election, they were notified by then-Secretary of the U.S. Department of Homeland Security (DHS) Jeh Johnson of growing evidence of foreign intrusions into state election systems and of the possibility of foreign interference. In June, federal cybersecurity experts noticed that the network credentials of an Arizona county elections worker, which would allow access to Arizona’s state voter registration system, had been posted on a site frequented by suspected Russian hackers. Several weeks later, Illinois Board of Elections’ information technology staff noticed a significant increase in activity involving their voter registration system: “Malicious queries were hitting […the voter registration system] 5 times per second, 24 hours a day, looking for a way to break in.”10 Illinois officials took the website offline and discovered that the attack had originated overseas and had begun weeks earlier.

In October 2016, DHS and the Office of the Director of National Intelligence (ODNI) issued a joint statement on election security. The statement said that some states had seen scanning and probing of their election systems, “which in most cases originated from servers operated by a Russian company.”11 DHS urged election administrators to remain vigilant.

By late December 2016, the federal government, through a Joint Analysis Report, provided further details about Russian cyber-attacks that had targeted one of the political party’s campaigns.12 In response, President Obama expelled 35 Russian diplomats from the United States and imposed sanctions on two Russian intelligence services. The president declared that, “All Americans should be alarmed by Russia’s actions,” and said that his actions were “a necessary and appropriate response to efforts to harm U.S. interests in violation of established international norms of behavior.”13

In January 2017, ODNI issued a report, “Assessing Russian Activities and Intentions in Recent US Elections.” The report documented Russia’s use of cyber tools and media campaigns to influence the 2016 U.S. presidential

11 “Joint Statement from the Department of Homeland Security and Office of the Director of National Intelligence on Election Security.”

13 The White House. Office of the Press Secretary, “Statement by the President on Actions in Response to Russian Malicious Cyber Activity and Harassment,” December 29, 2016. https://obamawhitehouse.archives.gov/the-press-office/2016/12/29/statement-president-actions-response-russian-malicious-cyber-activity.

election. Although the report primarily covered influence operations aimed at the political campaigns, it also addressed efforts to gain access to technologies associated with administering elections. It stated that:

Russian intelligence obtained and maintained access to elements of multiple US state or local electoral boards. DHS assesses that the types of systems Russian actors targeted or compromised were not involved in vote tallying. . . . We assess Moscow will apply lessons learned from its Putin-ordered campaign aimed at the US presidential election to future influence efforts worldwide, including against US allies and their election processes.14

I have reached this determination so that election infrastructure will, on a more formal and enduring basis, be a priority for cybersecurity assistance and protections that the Department of Homeland Security provides to a range of private and public sector entities. By “election infrastructure,” we mean storage facilities, polling places, and centralized vote tabulations locations used to support the election process, and information and communications technology to include voter registration databases, voting machines, and other systems to manage the election process and report and display results on behalf of state and local governments.”15

By September 2017, voter registration systems or public election sites in 21 states had been identified by DHS as having been targeted by Russian hackers.16 In May 2018, the U.S. Senate Select Committee on Intelligence released a summary of its initial findings and recommendations regarding

the Russian targeting of election infrastructure during the 2016 election. The report states

Assertion of Illegal Voting During the 2016 Election

Donald J. Trump won the presidency in 2016, having received a majority of electoral votes.19,20 He did not win the popular vote, but claimed in late November 2016 that he would have won the popular vote “if you deduct the millions of people who voted illegally.”21 He repeated this claim in a January 2017 meeting with Congressional leaders, asserting that between 3 and 5 million illegal immigrants voted for Hillary Clinton.22

In response to the president’s assertion, the bipartisan National Association of Secretaries of State (NASS) issued the following statement:

17 U.S. Senate Select Committee on Intelligence, “Russian Targeting of Election Infrastructure During the 2016 Election: Summary of Initial Findings and Recommendations,” May 8, 2018, pp. 1-2, available at: https://www.burr.senate.gov/imo/media/doc/RussRptInstlmt1-%20ElecSec%20Findings,Recs2.pdf.

made by President Trump, but we are open to learning more about the Administration’s concerns. In the lead up to the November 2016 election, secretaries of state expressed their confidence in the systemic integrity of our election process as a bipartisan group, and they stand behind that statement today.23

The committee authoring the current study did not find evidence of large-scale illegal voting in the 2016 election.

study vulnerabilities in voting systems used for federal elections that could lead to improper voter registrations, improper voting, fraudulent voter registrations, and fraudulent voting. The Commission will also study concerns about voter suppression, as well as other voting irregularities. The Commission will utilize all available data, including state and federal databases.24

On January 3, 2018, after two meetings of the commission, President Trump announced its disbanding.25 The commission had been embroiled in numerous controversies, including a request for voter registration files that both Republican and Democratic state officials considered overly broad26 and questions about whether commission proceedings complied with the Federal Advisory Committee Act and whether its own members had been excluded from deliberations.27 The commission did not issue any reports before it was disbanded.

President Trump subsequently asked DHS to review the issue of voter fraud. When asked if DHS had plans to pursue the fraud issues, DHS spokesperson Tyler Houlton stated that the department “continues to work in support of state governments who are responsible for administering elec-

tions, with efforts focused on securing elections against those who seek to undermine the election system or its integrity.”28

As in previous federal elections, election administrators oversaw a complex voting process during the 2016 presidential election. Efforts by the Russian government to probe systems that help administer elections, along with related efforts to influence the election using the Internet, prompted a new awareness of additional potential vulnerabilities. The DHS designation of election infrastructure as critical national infrastructure adds an additional facet into the election process. The following chapters describe U.S. election systems and consider how developments in 2016 and 2017 and issues already associated with election infrastructure may be addressed to make voting in the future more accessible, reliable, verifiable, and secure.

Next: 3 Voting in the United States »
Securing the Vote: Protecting American Democracy Get This Book
× 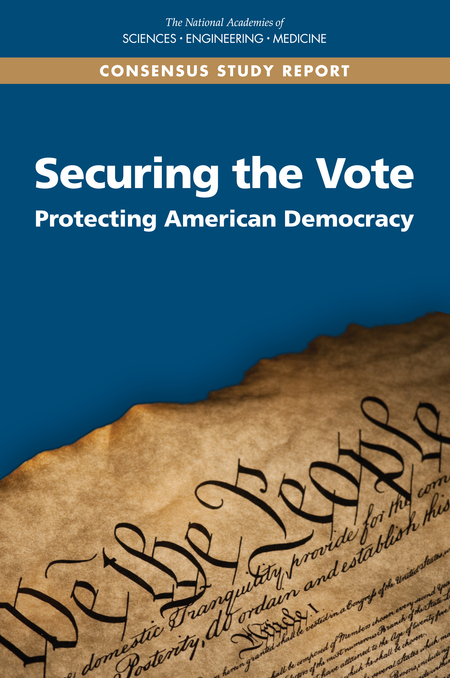