Get This Book
Visit NAP.edu/10766 to get more information about this book, to buy it in print, or to download it as a free PDF.
« Previous: Appendix D: Other Approaches to Building Qubits
Page 226 Share Cite
Suggested Citation:"Appendix E: Global R&D Investment." National Academies of Sciences, Engineering, and Medicine. 2019. Quantum Computing: Progress and Prospects. Washington, DC: The National Academies Press. doi: 10.17226/25196.
×

A recent bibliometric analysis conducted by researchers at the Naval Surface Warfare Center’s Dahlgren Division provides a time series look at the public-facing research output by nation (Figure E.1). According to this analysis, U.S. institutions have produced more research papers in quantum computing and quantum algorithms than any nation overall, and for every year since 1996. However, efforts from Chinese researchers rose significantly after 2006, with the two countries far outpacing all other countries each year since 2012. When including post-quantum cryptography and quantum key distribution, China’s output has surpassed that of the United States in the number of papers produced each year since (although U.S. publications remain more heavily cited).

The European Union (EU) has supported research in quantum science and technology for more than 20 years, with a cumulative budget of around €550 million through its Framework Programmes for Research

and Development. In 2016, a strategy for research and development in quantum technology (the “Quantum Manifesto”) signed by more than 3,000 individuals from academia, industry, and governments was presented to the European Commission (EC). Soon after, in line with this strategy, the EC announced plans for an ambitious €1 billion, 10-year flagship research program on quantum technologies to begin in 2018 as part of the EC’s Horizon 2020 research initiative. Funding for this coordinated program will come from Horizon 2020 and other EU and national sources. The manifesto and follow-on planning documents identify four major areas for R&D: quantum communication, computation, simulation, and sensing and metrology. Each area is to be addressed across three dimensions: education/training, software/theory, and engineering/control. The first call for proposals under this initiative was published in October 2017, targeting five areas: collaborative research projects that span at least three different institutions in at least three European countries, each eligible for funding up to €130 million [1,2].

Underneath this flagship, additional, nation-specific programs have emerged. For example, the Swedish Wallenberg Centre for Quantum Technology was announced in 2017 and is sponsored by the Knut and Alice Wallenberg Foundation (SEK600 million) and industrial sources (SEK400 million). Its objectives include those of the EU Flagship program, with a 10-year core goal of developing a 100-qubit superconducting quantum computer. The program spans four universities, includes a dedicated graduate school, and aims to recruit new faculty and research scientists to establish a quantum workforce that will persist after the program expires [3,4].

In 2014, the United Kingdom’s Engineering and Physical Sciences Research Council launched a coordinated national initiative to support and accelerate the development of quantum technologies. The UK National Quantum Technologies Program, funded at a level of £270 million over 5 years, includes an emphasis in quantum sensors and metrology, quantum enhanced imaging, networked quantum information technologies, and quantum communications technologies. While research in quantum science continues under established funding mechanisms, the program is designed specifically to transform scientific output into practical technologies with beneficial applications and establish U.K. leadership in the field. The initiative is governed by a strategic advisory board with international membership, which meets three times annually to oversee and coordinate program activities and engage in roadmapping and visioning for future technologies, and a programme operations group, which meets six times annually to facilitate coordination among government agencies [5].

E.3 THE AUSTRALIAN CENTRE FOR QUANTUM COMPUTING AND COMMUNICATION TECHNOLOGY

In 2017, the Australian Research Council (ARC) funded the Centre for Quantum Computation and Communication Technologies through its Centre of Excellence Program. Funded at a level of $33.7 million over seven years and led by the University of New South Wales, the centre emphasizes research in the areas of quantum communication, optical quantum computing, silicon quantum computing, and quantum resources and integration. The centre includes facilities at six Australian universities, and formal collaborations and partnerships with universities abroad. In addition to development of component technologies, the centre is also

focused on frameworks for scaling, integrating, and bringing quantum technologies to market, including a vision for developing a quantum Internet.

Many recent news articles have highlighted progress by researchers in China in the areas of quantum communication and quantum cryptography. Demonstration of quantum communications via satellites and long-path optical fibers have received much attention. An intercity channel to enable quantum key distribution (QKD) has been established between Beijing and Shanghai. QKD has recently been deployed internationally for the first time using satellite as well as ground connections, with what has been billed as the first quantum-encrypted video teleconference between China and Vienna. While the communication route reportedly included several security weaknesses and classical stopovers, it was the first demonstrated use of QKD for intercontinental communications [6].

In addition to reported advances in quantum communications, China announced in 2017 plans to build a centralized National Laboratory for Quantum Information Science in Hefei, Anhui province, with an expected completion time frame of 2.5 years. While the effort is expected to span a range of potential applications of quantum technology, quantum metrology and quantum computing were emphasized. A goal of 2020 for achieving quantum supremacy has been announced [7].

Next: Appendix F: Committee and Staff Biographical Information »
Quantum Computing: Progress and Prospects Get This Book
× 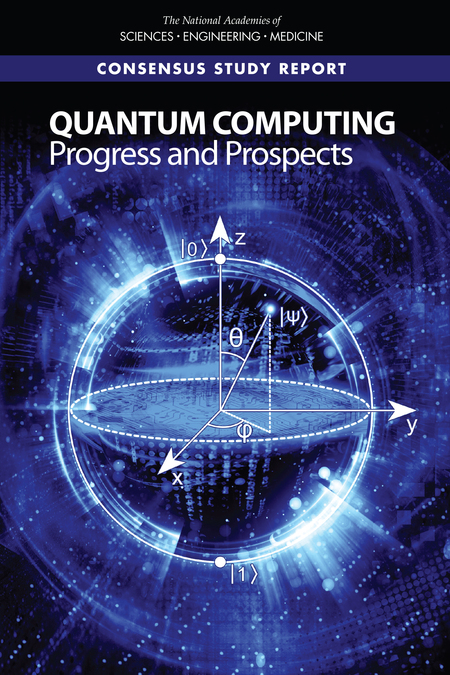 Quantum mechanics, the subfield of physics that describes the behavior of very small (quantum) particles, provides the basis for a new paradigm of computing. First proposed in the 1980s as a way to improve computational modeling of quantum systems, the field of quantum computing has recently garnered significant attention due to progress in building small-scale devices. However, significant technical advances will be required before a large-scale, practical quantum computer can be achieved.

Quantum Computing: Progress and Prospects provides an introduction to the field, including the unique characteristics and constraints of the technology, and assesses the feasibility and implications of creating a functional quantum computer capable of addressing real-world problems. This report considers hardware and software requirements, quantum algorithms, drivers of advances in quantum computing and quantum devices, benchmarks associated with relevant use cases, the time and resources required, and how to assess the probability of success.