Get This Book
Visit NAP.edu/10766 to get more information about this book, to buy it in print, or to download it as a free PDF.
« Previous: Appendix B: Disclosure of Conflict of Interest
Page 467 Share Cite
Suggested Citation:"Appendix C: Coastal Blue Carbon:Macroalgae." National Academies of Sciences, Engineering, and Medicine. 2019. Negative Emissions Technologies and Reliable Sequestration: A Research Agenda. Washington, DC: The National Academies Press. doi: 10.17226/25259.
×

Macroalgae, commonly known as seaweed, are fast-growing aquatic organisms. Macroalgae occur in its largest stands as kelp forests in temperate regions including U.S. coastlines. Unlike coastal wetland habitats, macroalgae are largely attached to rocky surfaces and do not accumulate carbon in soils with extensive root systems. An estimated 82 percent of kelp productivity becomes detritus (Krumhansl and Scheibling, 2012). Carbon sequestration can thus only occur if carbon is buried in sediments or exported into the deep ocean and sequestered long term. Most carbon from macroalgae is assumed to return to the carbon cycle through herbivory and thus extensive study on its carbon storage rate and capacity has not been conducted (Howard et al., 2017). Krause-Jensen and Duarte (2016) have synthesized data from studies of macroalgae transport and occurrence in the deep ocean to develop a rough estimate for macroalgae’s carbon removal potential. They identified potential opportunities for carbon storage through burial within the algal beds, burial in the continental shelf, export to below the mixed ocean layer, and export to the deep sea. Using an approximate global net primary production (NPP) of 1,521 TgC/y, they estimate that macrolagae may be sequestering 173 TgC/y, or a removal rate of 11 percent per year. Most of this is assumed to be sequestered in the deep ocean.

Large uncertainties persist in evaluating macroalgae as a reliable coastal CO2 removal approach because of unknowns in their global areal extent, the fraction of carbon that may be sequestered, and the timescale at which carbon storage may occur. Estimates based on ecosystem suitability modeling indicate that the maximum potential global area for macroalgae may be as high as 570 million ha (Gattuso et al, 2006). The ocean processes that affect algal transport and storage are not well understood and could provide more accurate assessment of natural carbon sequestration. Carbon storage may also be dependent on the species of macroalgae and its carbon content and lability (Trevathan-Tackett et al., 2015).

Restoration of kelp beds may increase the amount of carbon sequestered in the deep sea. However, there will also be increases in the kelp that floats onto beaches or is made available to the food web, the transport and impacts of which would need to

be understood. Aquaculture activities may be more controlled; however, seaweed farming for sequestration would be in competition with its potential food and energy usages. Methods for seaweed aquaculture may increase carbon removal exponentially by floating seaweed beds near the surface (Duarte et al., 2017). However, these floating beds would not be subject to the same export processes, and natural sequestration from such beds is not clear. Seaweed culture is generally considered for use for food or energy rather than as a NET. The longevity of existing or restored kelp stands may be impacted by warming waters and ocean acidification, such as in a reduction in germination (Gaitán-Espitia et al., 2014), however the impacts are not always seen and may be species dependent and dependent (Leal et al., 2017; Olischläger et al., 2017; Xu et al., 2015). Warming waters may also lead to increased sea urchin grazing (Nabuurs et al., 2007). Kelp beds provide co-benefits of habitat for fish and invertebrate species, and attenuate wave energy for coastal protection (Narayan et al., 2016). 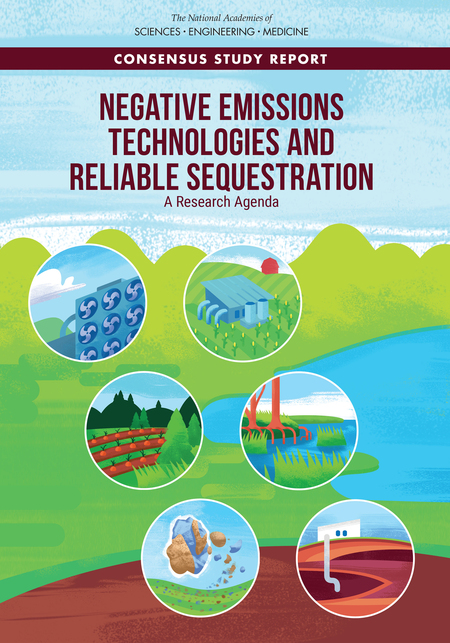 In 2015, the National Academies published Climate Intervention: Carbon Dioxide Removal and Reliable Sequestration, which described and initially assessed NETs and sequestration technologies. This report acknowledged the relative paucity of research on NETs and recommended development of a research agenda that covers all aspects of NETs from fundamental science to full-scale deployment. To address this need, Negative Emissions Technologies and Reliable Sequestration: A Research Agenda assesses the benefits, risks, and "sustainable scale potential" for NETs and sequestration. This report also defines the essential components of a research and development program, including its estimated costs and potential impact.