Get This Book
Visit NAP.edu/10766 to get more information about this book, to buy it in print, or to download it as a free PDF.
« Previous: 3 State of the Science of Transgenic Nonhuman Primate Models for Nervous System Disorders
Page 27 Share Cite
Suggested Citation:"4 Translating Research from Nonhuman Primates to Humans." National Academies of Sciences, Engineering, and Medicine. 2019. Transgenic Neuroscience Research: Exploring the Scientific Opportunities Afforded by New Nonhuman Primate Models: Proceedings of a Workshop. Washington, DC: The National Academies Press. doi: 10.17226/25362.
×

The hope embedded in the nonhuman primate research taking place around the world is that discoveries made in these animals will translate to humans in ways that research in other animal models has not. Yoland Smith said that making the leap from nonhuman primates to humans will be neither trivial nor easy, but the size and complexity of the primate brain will make it easier to target a sufficient number of neurons to facilitate the diffusion of vectors or achieve other forms of genetic modification.

A TRANSLATIONAL RESEARCH ROADMAP IN AUTISM

David G. Amaral, distinguished professor of psychiatry and neuroscience and Beneto Foundation Chair of the MIND [Medical Investigations of Neurodevelopmental Disorders] Institute at the University of California, Davis, has been studying nonhuman primates for many years, and in the past two decades has also been studying human children with autism. He believes that gene-edited monkeys offer a way to understand the different phenotypes of autism and parse this heterogeneous disorder into meaningful subtypes that have clinical and possibly therapeutic implications.

For example, Amaral was involved in a study published in 2014 that investigated the role of CHD8 [chromodomain helicase DNA binding protein 8] mutations in children with autism (Bernier et al., 2014). What they found, according to Amaral, was that of the 15 children in the study that had loss-of-function truncations in the CHD8 gene, 13 had autism. Most of these children also had macrocephaly, or large brains. Amaral said that about 15 percent of boys with autism have large brains, and that this subgroup also has more severe symptoms and a worse prognosis (Amaral et al., 2017). To investigate the neurobiology of this large-brain form of autism, an animal model was needed, but according to Amaral, disrupting CHD8 in rodents produces macroencephaly, but not the behavioral characteristics typical of autism. He suggested that manipulating the gene in nonhuman primates could provide not only a model for understanding the neurobiology of this form of autism, but also for testing new therapeutic interventions.

Karen Parker described what she called a translational research roadmap for autism that begins by developing sophisticated animal models to identify biomarkers and targets; translates those monkey findings to autism patients; and then uses that model to test novel treatments.

Earlier work in twins had demonstrated that autistic traits and the polygenic burden or risk underlying these traits is distributed across populations (Constantino and Todd, 2003), suggesting it would be valuable to model autism polygenically in monkeys, said Parker. She started with an extremes group approach in a population of 5,000 rhesus monkeys at the California National Primate Research Center. These animals are bred to preserve genetic heterogeneity and housed in ecologically valid environments (outdoors in mixed male and female groups with access to play gyms and swinging perches). Parker said that like humans, these animals exhibit stable, individual differences in social behavior. At the extremes are individuals who can be identified as “low social” or “high social.” Low-social animals, like humans with autism, initiate and receive fewer affiliative interactions, spend less time grooming and playing, display more inappropriate social behaviors, and show diminished interest and less social competence than their typical peers (Sclafani et al., 2016).

Parker asked a group of clinicians to identify the kinds of behavioral assays that would provide face validity for her monkey model, that is, that would convince them that the monkeys were accurately modeling human autism. She and her colleagues then used this information to develop a monkey social behavior test battery that would allow them to interrogate the core symptoms seen in patients. Criteria for these tests included ecological relevance, prior successful use in macaques or related macaque species, the ability to generate variation in performance, and no need for extensive training prior to test administration.

For example, Parker said there is evidence that children with autism have face recognition but not object recognition problems, so her team created a monkey version to test these two domains. Other tests included in the battery test social competence, joint attention, ability to read social cues, social motivation, and intellectual disabilities, all using species-specific behaviors, such as lip smacking and vocalizations.

To validate this model from a biological perspective, Parker and colleagues turned to biomarkers. Because reproducibility problems have plagued much of the work done in humans on blood biomarkers, Parker thought it might be better to look at cerebrospinal fluid (CSF), particularly at some of the signaling pathways that have been implicated in regulating prosocial behavior in mammals and those dysregulated in syndromic forms of autism. They discovered that CSF vasopressin levels could, with high accuracy, predict whether an animal was high or low social (Parker et al., 2018). To see if this is replicated in human children, they piggy-

backed on clinical indications where children were getting lumbar puncture for standard of care reasons. In their first study, they found that 13 of 14 children could be classified with high accuracy based on their CSF vasopressin level alone. They have since replicated the study and shown that CSF vasopressin levels correlate with social deficits (Oztan et al., 2018).

Based on these results, Parker and colleagues have also conducted a small clinical trial of vasopressin as a possible treatment for autism.

In addition to developing these new disease models, tools will be needed to assess behavior and cognition in nonhuman primates in a manner that translates to human conditions, said Angela Roberts. For example, more than 20 years ago, Roberts and colleagues developed a battery of tests for use in nonhuman primates to assess various aspects of cognitive function, including working memory, visual recognition memory, visual spatial processing, planning, and behavioral flexibility.

Their lab also demonstrated that damage to two distinct regions of the prefrontal cortex affected different aspects of behavioral flexibility. They developed a test to assess these two forms of behavioral flexibility in monkeys and were able to demonstrate that damage to the orbito-frontal cortex impaired a monkey’s ability, having learned that one of two stimuli was associated with reward, to switch responding to the other stimulus as the association between stimuli and rewards changed (reversal learning). On the other hand, damage to the ventrolateral prefrontal cortex disrupted higher-order attentional set shifting, the ability to switch attention from one aspect of a stimulus (e.g., shape) to another (e.g., color) (Dias et al., 1996). Roberts said this was subsequently forward translated into humans preclinically by showing a similar dissociation using functional imaging, and clinically by showing that a deficit in shifting attention may be a vulnerability marker for obsessive-compulsive disorder (Chamberlain et al., 2006) and possibly an early marker of Huntington’s disease.

Roberts and colleagues have also developed a test to measure threat-driven behaviors in the marmoset that relate to fear and anxiety. They used this test to fractionate out the different forms of anxiety produced by lesions to different areas of the prefrontal cortex (Agustin-Pavon et al., 2012; Shiba et al., 2017). They showed that animals with lesions in the ventrolateral prefrontal cortex are anxious because they have problems shifting attention, while those with lesions in the anterior orbitofrontal cortex

are anxious because they have problems tracking punishment and reward in their environment. The human analog, said Roberts, would be two patients with a similar anxiety phenotype but different underlying causes, who thus should receive different treatment.

Another human characteristic that demonstrates high cognitive function is self-recognition. Mu-Ming Poo and colleagues have developed a test of mirror self-recognition in macaques that replicates the self-recognition test used as an indicator of self-consciousness and body awareness in humans and apes. Because some people with psychiatric conditions or autism demonstrate impairments in this test, Poo reasoned that if macaques could be trained to perform mirror self-recognition, their brains could be examined with brain imaging to study the neural processes underlying this ability. Although macaques do not spontaneously demonstrate mirror self-recognition, Poo and colleagues were able to train them to recognize face marks through the use of visual-somatosensory training where face marks seen in the mirror were simultaneously associated with laser-light stimulation-induced sensation of the corresponding area of the face (Chang et al., 2015). Subsequently, they also trained the monkeys to learn precise visual-proprioceptive association for mirror images, and that this ability could be generalized to novel situations where the monkeys demonstrated self-directed behaviors after seeing mirror images of themselves (Chang et al., 2017).

Marmosets are an ideal model for longitudinal imaging studies of brain development because they are fully developed by 2 years of age, said Roberts. She and her colleagues imaged a group of marmosets every 3 months between the ages of 3 months and 2 years to measure growth trajectories within 53 cortical regions. Thus, they were able to document substantial variability in the prefrontal cortex during development, which may relate to different symptoms that emerge during childhood and adolescence, she said (Sawiak et al., 2018). She suggested that transgenic models may help to show how stress interacts temporally with the genome in order to affect prefrontal circuits.

The marmoset brain is also ideal for mapping brain circuits of cognitive behaviors because it is small but with primate structures, said Hideyuki Okano (see Figure 4-1). He and his colleagues recently performed calcium imaging

in deep layers of the marmoset cerebral cortex using a microendoscope—a miniaturized fluorescent microscope mounted on the skull to enable deep imaging of freely behaving animals (Ghosh et al., 2011) combined with adeno-associated virus (AAV)-delivered GCaMP (Park et al., 2016) to measure calcium influx into cells as a marker of neuronal excitation (Broussard et al., 2014). GCaMP is a molecule created by fusing a calcium-binding protein with green fluorescent protein (Akerboom et al., 2012). This approach enabled them to monitor and decode the activity of 100 to 1,000 neurons in the motor cortex during a complex behavior such as pellet reaching (Kondo et al., 2018). Okano said this technology using free-moving marmosets will make it possible to dissect large-scale neural circuits during human-relevant behaviors under natural conditions, enabling the study of complex behaviors such as social interactions, fear,

anxiety, and complex motor tasks. In combination with transgenic technologies, this has the potential to transform our understanding, diagnosis, and treatment of human diseases, he said.

Okano is now developing techniques to monitor the activity of neurons in control and disease model marmosets. He predicted that the microendoscope will also make possible other imaging advances, including imaging of deeper brain areas such as the basal ganglia, pathway-specific and cell-type-specific imaging using Cre lines and in vivo genome editing, and imaging multiple sites simultaneously. It may also be used in combination with optogenetics, Okano added. 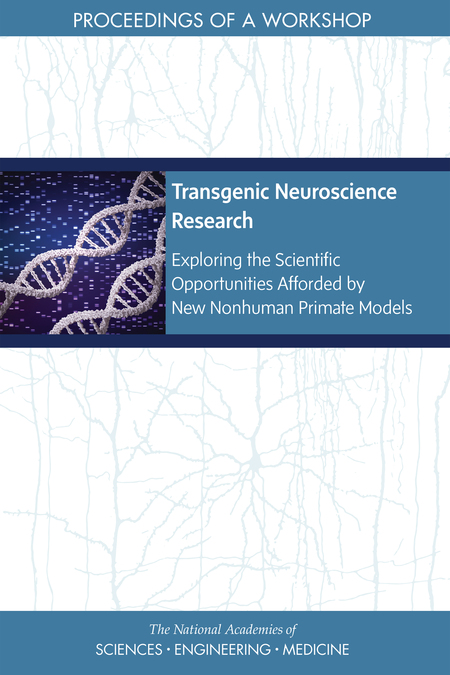 To examine the promise, concerns, and challenges related to neuroscience research using genetically modified nonhuman primates, the National Academies of Sciences, Engineering, and Medicine hosted a public workshop on October 4, 2018, bringing together an international group of experts and stakeholders representing academia, industry, laboratory animal management, disease-focused foundations, and federal agencies. The workshop was designed to explore the current state and future promise of research using genetically modified nonhuman primate models of disease to understand the complex functions of the brain that control behavior, movement, and cognition in both health and disease states. This publication summarizes the presentations and discussions from the workshop.