Privacy and Security in the 21st Century: Who Knows and Who Controls?: Proceedings of a Forum (2019)

Get This Book
Visit NAP.edu/10766 to get more information about this book, to buy it in print, or to download it as a free PDF.
Page i Share Cite
Suggested Citation:"Front Matter." National Academy of Engineering. 2019. Privacy and Security in the 21st Century: Who Knows and Who Controls?: Proceedings of a Forum. Washington, DC: The National Academies Press. doi: 10.17226/25575.
×

WHO KNOWS AND WHO CONTROLS?

Prepared by Steve Olson
for the

NOTICE: The subject of this publication is the forum titled Privacy and Security in the 21st Century – Who Knows and Who Controls? held during the 2018 annual meeting of the National Academy of Engineering.

Copyright 2019 by the National Academy of Sciences. All rights reserved.

Suggested citation: National Academy of Engineering. 2019. Privacy and Security in the 21st Century: Who Knows and Who Controls?: Proceedings of a Forum. Washington: National Academies Press. https://doi.org/10.17226/25575.

The theme of the 2018 annual meeting of the National Academy of Engineering was “privacy and security in the 21st century: who knows and who controls?” It was one of the more popular subjects we have examined in recent years. Everyone relies on computers to do their jobs, interact with others, and engage with modern society. Engineers, whose professional practices created computational technologies like finite element methods, are entirely dependent on them.

On the first day of the meeting, two distinguished plenary speakers shared their perspectives and insights on the topic. Diane Greene, chief executive officer of Google Cloud, who was inducted as a member of the Academy earlier in the day, talked about securing information as the computer industry transitions to the cloud. Mike Walker, principal researcher at Microsoft Research NExT, described the privacy and security issues raised by distributed computing devices, including those constituting the Internet of Things. Both speakers acknowledged the likely prospect of continued threats from malicious actors, but they also observed ongoing substantial progress against such threats in recent years and expected in the future. In short, it is not time to relax.

On the second day of the meeting, Mike Walker and three other computer security experts—Batya Friedman, professor in the Information School at the University of Washington; Aanchal Gupta, director of security at Facebook; and Lea Kissner, global lead of privacy technologies at Google—participated in the meeting’s annual forum. As in previous years, the forum was adroitly moderated by Ali Velshi, anchor and business correspondent for NBC News and MSNBC.

Information technologies are at the forefront of accelerating change in society. What is new today is the breadth of technological change, the

rate and global reach of these changes, and the scales of their impact. New technologies and capabilities throughout engineering are changing the world, and these changes are coming whether we like them or not. As the familiar technologies we are accustomed to using disappear, we are left wondering, “What’s next?”

As individuals and as members of organizations, each of us grapples with change and hopes that we are making sound adaptations to it. Knowing what to anticipate is a critical underpinning for such decisions, which is another reason the theme of this year’s annual meeting was so popular. The expert presentations at this meeting gave us all a great deal to think about on a continuing basis.

1 Security in the Cloud

Rising to the Challenge

2 Securing the Internet of Things

The Range of Threats

The Moral Dimensions of Security

The Role of Regulation

Page i Share Cite
Suggested Citation:"Front Matter." National Academy of Engineering. 2019. Privacy and Security in the 21st Century: Who Knows and Who Controls?: Proceedings of a Forum. Washington, DC: The National Academies Press. doi: 10.17226/25575.
× 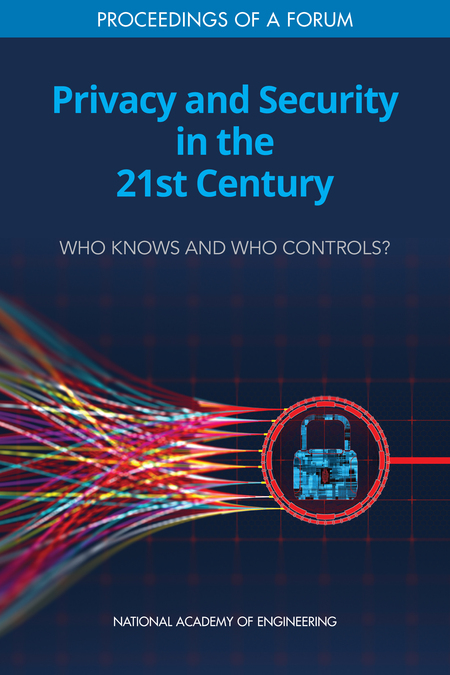 New technologies and capabilities, such as Google Cloud and artificial intelligence, are changing the world at an unprecedented rate. A transition to cloud computing offers a variety of benefits, including worldwide access and faster networks. This digital transformation also presents an array of new challenges. The privacy and security of these systems is one of the most discussed subjects of the current century.

The theme of the National Academy of Engineering Annual Meeting on September 30th and October 1st, 2018 was privacy and security in the 21st century. Topics of discussion included new security regulations and procedures to mitigate the new range of threats that this era presents. Understanding privacy in new digital contexts and building security into systems with the use of artificial intelligence are necessary steps in order to protect our data in the future. This publication summarizes the presentations and discussions from the forum.