Manipulating Quantum Systems: An Assessment of Atomic, Molecular, and Optical Physics in the United States (2020)

Get This Book
Visit NAP.edu/10766 to get more information about this book, to buy it in print, or to download it as a free PDF.
« Previous: Appendix B: Organization of the Report
Page 282 Share Cite
Suggested Citation:"Appendix C: Reprise of Past National Academies Reports on AMO Science." National Academies of Sciences, Engineering, and Medicine. 2020. Manipulating Quantum Systems: An Assessment of Atomic, Molecular, and Optical Physics in the United States. Washington, DC: The National Academies Press. doi: 10.17226/25613.
×

Reprise of Past National Academies Reports on AMO Science

Since 1994, the National Academies of Sciences, Engineering, and Medicine has produced five reports examining various aspects of atomic, molecular, and optical (AMO) science: the 1994 decadal study, Atomic, Molecular, and Optical Science: An Investment in the Future; its supplement, Atoms, Molecules, and Light: AMO Science Enabling the Future (2002); the next decadal study, Controlling the Quantum World: The Science of Atoms, Molecules, and Photons (2007); Optics and Photonics: Essential Technologies for Our Nation (2013); and Opportunities in Intense Ultrafast Lasers: Reaching for the Brightest Light (2018). In this appendix, the committee considers the impact of these reports and the response to their report recommendations. To emphasize the historical nature of the issues discussed in this report, the committee also comments on the National Academies report Atomic, Molecular, and Optical Physics (1986).

ATOMIC, MOLECULAR, AND OPTICAL SCIENCE: AN INVESTMENT IN THE FUTURE (1994)

In the 1994 study Atomic, Molecular, and Optical Science: An Investment in the Future, the panel arrived at three priorities for AMO science in the immediate future. Key facets of these recommendations were as follows:

Clearly, over the past 25 years the AMO community has seen rapid developments in laser technology, with a number of new emerging areas such as laser frequency combs, attosecond science, and coherent lights sources covering infrared to extreme ultraviolet. All areas of AMO science have been strongly impacted by these advances in laser technologies, which are reflected in the current report. The same is true for the control and manipulation of atoms, molecules, charged particles, and light. This is the core part of the AMO field, and researchers have seen revolutionary developments in capabilities of controlling individual particles. In fact, the community has moved beyond the point of single particle control and is now entering a new stage where these individually controlled particles are brought together to realize new experimental platforms for quantum information science, a field that is largely born out of AMO science in the mid-1990s.

The 1994 report also had some specific comments about the future of AMO science. Some science and technology trends foreseen at that time have in fact been realized.

Other predictions and trends have been more ambiguous, were avoided, or did not come to pass:

Some concerns noted in this 25-year-old report continue to resonate today and need addressing:

Other recommendations of the 1994 report are also still quite relevant:

In 2002, a brief update to 1994 decadal, Atoms, Molecules, and Light: AMO Science Enabling the Future, was published. The intent was “(1) to delineate the connection between AMO discoveries and technological applications throughout society and (2) to highlight recent advances that will play an important role in shaping the landscape of scientific discovery and technological invention.” This update was not tasked to produce additional findings, conclusions, or recommendations and was mainly a brochure; however, one key scientific highlight worth mentioning following its 1995 discovery was the Bose-Einstein condensate.

CONTROLLING THE QUANTUM WORLD: THE SCIENCE OF ATOMS, MOLECULES, AND PHOTONS (2007)

In 2007, a subsequent full decadal study of AMO science was conducted: Controlling the Quantum World: The Science of Atoms, Molecules, and Photons. The report shows considerable awareness in linking AMO to national priorities—such as those outlined in the President’s State of the Union in 2006 and the FY2007 budget request—and connecting with important watchwords for the future such as “coherence” and “control.” Some of its key recommendations are still quite salient today and reinforce recommendations in this report:

The other key recommendations in the report may have been addressed, but to what extent is unclear:

The report also laid out a set of grand challenges with relevance to this report, as follows:

The response to this report has been promising. In addition, at least two of the grand challenges above proved worthy of follow-up reports of their own: one on the future of optics and photonics (2013), and the other on high-intensity light sources (2018).

OPTICS AND PHOTONICS: ESSENTIAL TECHNOLOGIES FOR OUR NATION (2013)

In Optics and Photonics: Essential Technologies for Our Nation (2013), optics and photonics are cited as a key enabling field for economic growth with a need for an authoritative vision. The report aims to (1) help policy makers and leaders decide on courses of action that can advance the economy of the United States, (2) provide visionary guidance and support for the future development of optics and photonics technology and applications, and (3) ensure a leadership role for the United States in these areas. Several field-specific recommendations are made in the report that are outside the scope of the present report; however, the first key recommendation is relevant:

This key recommendation was responsible for the formation of the current National Photonics Initiative (NPI). The NPI, as stated on its website, has since become “a collaborative alliance among industry, academia and government seeking to raise awareness of photonics—the application of light—and drive U.S. funding and investment in five key photonics-driven fields critical to U.S. competitiveness and national security.” Like the National Nanotechnology Initiative before it, the NPI has also become the model for other national science initiatives, such as the National Quantum Initiative.

OPPORTUNITIES IN INTENSE ULTRAFAST LASERS: REACHING FOR THE BRIGHTEST LIGHT (2018)

In Opportunities in Intense Ultrafast Lasers: Reaching for the Brightest Light (2018), the committee was formed to assess the merit and extent of the scientific and technical advances that intense ultrafast lasers could afford the United States if such research was pursued. The concept for the report came out of the Committee on Atomic, Molecular, and Optical Sciences, a standing activity of the National Academies that operates under the auspices of the Board on Physics and Astronomy, and was motivated by three factors:

Many useful field-specific recommendations resulted from this report and are actively being addressed across the federal agencies, including the National Science Foundation and the Department of Energy.

The 1986 study Atomic, Molecular, and Optical Physics, chaired by Daniel Kleppner, was the first National Academies decadal survey of physics to include AMO science explicitly. The report identified promising research opportunities in AMO physics and made general recommendations in addition to many subfield-specific comments. Of particular note, the committee made overarching recommendations that connect with this report, including the following:

Next: Appendix D: Committee Biographical Information »
Manipulating Quantum Systems: An Assessment of Atomic, Molecular, and Optical Physics in the United States Get This Book
× 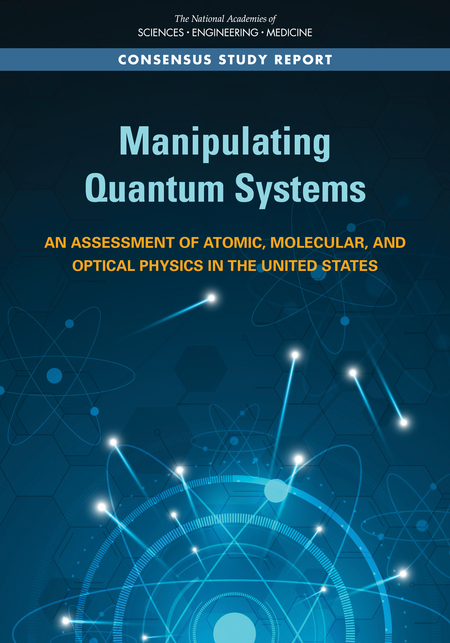 The field of atomic, molecular, and optical (AMO) science underpins many technologies and continues to progress at an exciting pace for both scientific discoveries and technological innovations. AMO physics studies the fundamental building blocks of functioning matter to help advance the understanding of the universe. It is a foundational discipline within the physical sciences, relating to atoms and their constituents, to molecules, and to light at the quantum level. AMO physics combines fundamental research with practical application, coupling fundamental scientific discovery to rapidly evolving technological advances, innovation and commercialization. Due to the wide-reaching intellectual, societal, and economical impact of AMO, it is important to review recent advances and future opportunities in AMO physics.

Manipulating Quantum Systems: An Assessment of Atomic, Molecular, and Optical Physics in the United States assesses opportunities in AMO science and technology over the coming decade. Key topics in this report include tools made of light; emerging phenomena from few- to many-body systems; the foundations of quantum information science and technologies; quantum dynamics in the time and frequency domains; precision and the nature of the universe, and the broader impact of AMO science.