Human Spaceflight: Apollo 50 Years On: Proceedings of a Forum (2020)

Get This Book
Visit NAP.edu/10766 to get more information about this book, to buy it in print, or to download it as a free PDF.
Page i Share Cite
Suggested Citation:"Front Matter." National Academy of Engineering. 2020. Human Spaceflight: Apollo 50 Years On: Proceedings of a Forum. Washington, DC: The National Academies Press. doi: 10.17226/25697.
×

Prepared by Steve Olson for the

NOTICE: The subject of this publication is the forum titled Human Spaceflight: Apollo 50 Years On held during the 2019 annual meeting of the National Academy of Engineering.

The 2019 meeting of the National Academy of Engineering celebrated not only the 50th anniversary of the Apollo 11 mission but human spaceflight in general, from the first ventures beyond Earth’s atmosphere to future flights to the Moon, Mars, and beyond.

The two plenary speakers on Sunday afternoon represented both the origins of spaceflight and our continued presence and ambitions in space. Thomas Stafford, an NAE member and NASA astronaut with the Gemini and Apollo programs, conducted the first rendezvous in space on Gemini 6A and designated the first lunar landing site when he flew the Apollo 10 mission around the Moon. A distinguished pilot and advisor, he still holds the record for the highest speed ever attained by a human—Mach 36, as the Apollo 10 command module reentered Earth’s atmosphere. Charles Bolden Jr. was pilot and mission commander on four Space Shuttle flights and NASA administrator from 2009 to 2017. He oversaw the transition from the Space Shuttle system to the dawning era of commercial spaceflight as well as the continuing robotic exploration of Mars to prepare for the arrival of astronauts. Both men had their listeners alternately laughing and applauding as they recounted their adventures in space and in meetings of the Washington policymakers who oversaw the space program.

The next day, in the annual forum, four speakers joined Generals Stafford and Bolden to fill out the story of human exploration of space. NAE member Robert Crippen piloted the first Space Shuttle flight in 1981 and commanded three other shuttle missions. Sandra Magnus flew on four Space Shuttle missions, including the shuttle’s final flight, and spent four and a half months on the International Space Station. After three shuttle flights, Christopher Ferguson became Boeing’s first

commercial test pilot astronaut and will be among the first to fly to space aboard the CST-100 Starliner. Hans Koenigsmann, at SpaceX, is responsible for the safe completion of the company’s missions into space. The forum was moderated by Deanne Bell, a mechanical engineer, entrepreneur, and television host, most recently of the CNBC show Make Me a Millionaire Inventor. She is also the founder and CEO of Future Engineers, an education technology company that engages students in online contests and will undoubtedly help produce some of the leading engineers of the 21st century.

Virtually all the members of the NAE have spent their careers in the era of human spaceflight, including more than 60 who reported, in an informal poll, that they worked on the Apollo program. Many younger members say they were inspired to become engineers by Apollo, Skylab, the Space Shuttle, and the International Space Station. I myself was a sophomore in high school when Alan Shepard became the first US astronaut to fly into space. Classes were canceled and we gathered in the auditorium to watch the flight on a 21-inch black-and-white television. Watching that achievement, I decided that an engineering future was for me.

The mission of the NAE is twofold: to advance the engineering profession and to serve the nation. Human spaceflight serves both aspects of that mission, and has demonstrated how engineering can help realize the highest aspirations of the human mind and spirit. Advances since 1969 and current initiatives show that there is much to look forward to over the next 50 years.

Flying to the Moon

The Legacy of Apollo

A Half-Century of Inspiration

2 The Space Shuttle and the International Space Station

From Skylab to the Space Shuttle

The Power of Diversity

3 The Era of Commercial Spaceflight

Lessons from a Lifetime

Next: 1 The Apollo Experience »
Human Spaceflight: Apollo 50 Years On: Proceedings of a Forum Get This Book
× 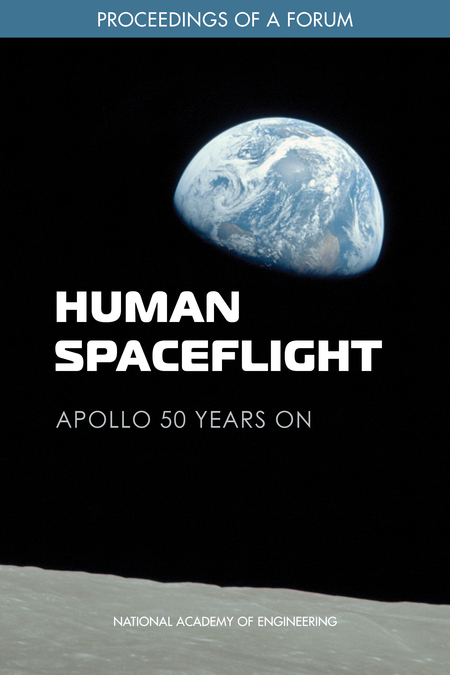 Human Spaceflight: Apollo 50 Years On summarizes the 2019 National Academies of Engineering Annual Meeting plenary presentations and forum. The Annual Meeting celebrated not only the 50th anniversary of the Apollo 11 mission but human spaceflight in general, from the first ventures beyond Earth's atmosphere to future flights to the Moon, Mars, and beyond. Speakers reflected on the inspiring trajectory of ingenuity, achievements, and lessons of the Apollo mission and discussed implications for future exploration, workforce development, and public engagement.