Get This Book
Visit NAP.edu/10766 to get more information about this book, to buy it in print, or to download it as a free PDF.
« Previous: 4 Life Sciences Division
Page 41 Share Cite
Suggested Citation:"5 Crosscutting Recommendations." National Academies of Sciences, Engineering, and Medicine. 2020. Assessment of the Physical Sciences Directorate at the Army Research Office. Washington, DC: The National Academies Press. doi: 10.17226/25830.
×

Advances in the fields covered by PSD increasingly rely on contributions made by scientists who have different areas of expertise. For example, in chemistry, combined efforts in modeling and experiment are often essential for significant advances. Similarly, progress in condensed matter physics often depends on collaborations between individuals skilled in materials synthesis and scientists pursuing new phenomena. In addition, all the physical sciences are increasingly relying on data analytics. PSD currently has some selected examples where funding of pairs of researchers from different disciplines, working synergistically, has led to significant success. Priority could go to those who have a demonstrated history of successful collaborations. PMs could set priorities in terms of desired outcome and let researchers get together to make proposals.

Crosscutting Recommendation 1: The Physical Sciences Directorate (PSD) should encourage the funding of pairs of principal investigators (PIs) from different disciplines who will work together on common problems, including those that are interdivisional and interdirectorate. For the Physics Division, the Army Research Office (ARO) should consider collaborative projects that involve both materials synthesis and condensed matter physics, as well as joint quantum information algorithms and information sciences projects, which would all be interdirectorate. For the Chemical Sciences Division, ARO should consider modeling and experiment, which are both within the division. For the Life Sciences Division ARO should consider mechanisms to allow data analytics to inform their explanatory models, which is also interdirectorate.

Many advances in science now occur at the boundaries between traditional disciplines, and consequently, multidisciplinary research has become increasingly important. This stretches the limits of traditional disciplines such as those found, for example, in university departments. The projects supported by the Life Sciences Division of PSD encompass five disciplines in the biological and social sciences. The division is already multidisciplinary, even if not as much as it could be. By contrast, the Physics and Chemical Sciences Divisions are organized along more traditional disciplinary lines, and they seem to be having more difficulty broadening the boundaries of their disciplines, where the research being done crossed over into areas that they have not supported in the past. That kind of focus can miss many important new research developments.

Crosscutting Recommendation 2: The Physical Sciences Directorate (PSD) should explore mechanisms to identify and support research in areas that do not fall solely within its core disciplines, including those that rely on contributions from research areas that are not funded within these core disciplines at all.

The program managers (PMs) within PSD currently do a good job of going to conferences and staying abreast of the exciting new work within their fields. They also do well in advertising their programs and interests to their own communities at such conferences. However, this highly targeted approach to publicizing the activities of ARO means that many members of the broader scientific community are unaware that ARO is a potential source of funding. That means that ARO is not seeing all the proposals from new principal investigators (PIs) with different perspectives that it might. This limitation is of particular importance when it comes to attracting researchers in biology and other life science disciplines because a life scientist is very unlikely to think that an organization called Physical Sciences Directorate would be interested in what he or she does.

A major success of several PSD programs has been their funding of very early career investigators, for whom ARO funding has been their first, and for a period of time, their only source of funding. This kind of support can help launch careers. Also, graduate student and postdoctoral researcher training and integration into the research efforts at universities through ARO grants and contracts are essential both for ongoing research as well as for the workforce pipeline. Similarly, PSD funding can be particularly valuable for more established researchers who want to pursue new directions. In addition, funding often goes to well-established groups, where the ARO funding can be leveraged by large amounts of funding from other sources. This leverages the relatively small support from the ARO, enabling the PMs to focus on that research specifically related to Army needs. ARO benefits because even modest ARO funds can leverage the results of much larger programs. However, there is also merit in funding new PIs doing different work, because this is also a good source of potential new research topics. Funding from PSD is particularly suitable for each of these groups of investigators because of the willingness of ARO to fund research that is not funded by other agencies, and because of the use of white papers as the initial stage of a proposal that makes the proposal selection process more efficient.

Also, the PSD research budget is small, and thus it cannot compete with other larger funding agencies. However, the strength of the PSD programs is the active interaction among the PMs to identify new areas for funding early, before they are generally recognized, and to act in concert with other Department of Defense (DoD) programs. Thus, there is an internal tension between the structure of the program into defined areas and efforts to find new areas. A PM who feels an obligation to continue funding in a defined area may be less willing to “give up” some of this funding to establish a new area. The Army Research Office (ARO) needs to examine what can be done to make the formal organization of its programs less rigid and to prioritize new areas of opportunities with the highest potential leverage.

Since the PSD research budget is small and thus it cannot compete with other larger funding agencies, PSD could take advantage of facilities built, managed, and operated by other agencies such as x-ray, laser, and neutron sources, as well as genomic facilities (i.e., DOE, DOC, and NIH). These facilities complement what can be provided by DoD laboratories and are necessary for advancing many of the science goals that are articulated for PSD.

Next: Appendixes »
Assessment of the Physical Sciences Directorate at the Army Research Office Get This Book
× 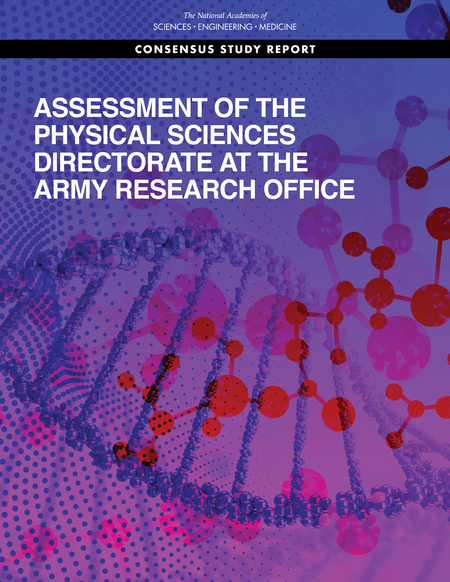