Visit NAP.edu/10766 to get more information about this book, to buy it in print, or to download it as a free PDF.
« Previous: Chapter 3 - Findings and Applications
Page 114 Share
Suggested Citation:"Chapter 4 - Conclusions and Suggested Research." National Academies of Sciences, Engineering, and Medicine. 2021. Proposed AASHTO Practice and Tests for Process Control and Product Acceptance of Asphalt-Treated Cold Recycled Pavements. Washington, DC: The National Academies Press. doi: 10.17226/25971.
×

114 Conclusions and Suggested Research Following the completion of this research study, conclu- sions and suggested research topics were developed and are included in the following sections. 4.1 Conclusions Based on the information obtained from the literature review and the online stakeholder survey, the most used methods for assessing the quality of constructed recycled pavement layers are not adequate for determining the time to opening to traffic or the time to surfacing. Assessing the moisture content and density were found to be the most used tests in current practice. However, the moisture content value is more of a surrogate for the amount of curing that has taken place within the recycled layer than an actual measure of the curing progress. Similarly, low density is often considered to be an indicator of poor quality, and thus poor expected performance, but high density values do not necessarily predict good performance. During this study, a series of tests that could be used to describe performance properties of an FDR, CIR, or CCPR layer were evaluated in laboratory and field settings. These tests were assessed based on their potential to quantify expected changes in mixture properties with respect to curing time and presence of cement as an active filler, their vari- ability, and their correlation with other tests. As part of the laboratory study, a ruggedness evaluation was conducted and showed that certain physical dimensions of the test fix- tures and the angular rate at which the torque was applied were significant factors. During the field study, an ILS was completed. The ILS was used to develop precision statements for each of the recommended tests. Following the work in the laboratory and the field, the study recommended that the shear and raveling properties of recycled materials be assessed to quantify the time to opening to traffic and surfac- ing. Specifically, the number of blows and the torque value from a long-pin shear test and a short-pin raveling test were proposed to quantify the material behavior. Based on a statis- tical analysis of the collected data, threshold values for each of the four tests were proposed, as shown in Table 4.1. The long-pin shear test requirements (both number of blows and torque value) would be used to determine the appropriate time to surface a recycled layer. The short-pin raveling test requirements (both number of blows and torque value) would be used to determine the appropriate time to allow traffic on a recycled layer. Given the length of the pins, the shear and raveling tests are appropriate only for recycled layers having a thickness greater than 3 in. 4.2 Suggested Research One limitation of a civil engineering research study is the ability to collect enough data on field-produced and field- placed materials. During this study, the research team was able to assess the properties of 16 recycled pavement sections where each section exhibited a unique combination of a recycling process, a stabilizing/recycling agent, the presence of an active filler, or another property expected to influence the test results. The development of the threshold values for each of the recommended tests was based on an analysis of the data collected. However, each project, by virtue of being part of a constructed facility for public use, was constructed with the best possible materials and construction practices. For the purposes of this study, it would have been beneficial to construct some sections purposefully having known defective material properties in addition to the two 0% binder trials. This would allow for the assessment of the response of the recommended tests to these defects. Future testing should be undertaken on such materials in an effort to verify the threshold values for each of the recommended tests. This verification could either be conducted on special test sec- tions in the field or be completed as part of a typical recycling project where the reclaimer or cold recycler would process adjusted materials or other modifications. C H A P T E R 4

Next: Chapter 5 - Training and Implementation »
Proposed AASHTO Practice and Tests for Process Control and Product Acceptance of Asphalt-Treated Cold Recycled Pavements Get This Book
× 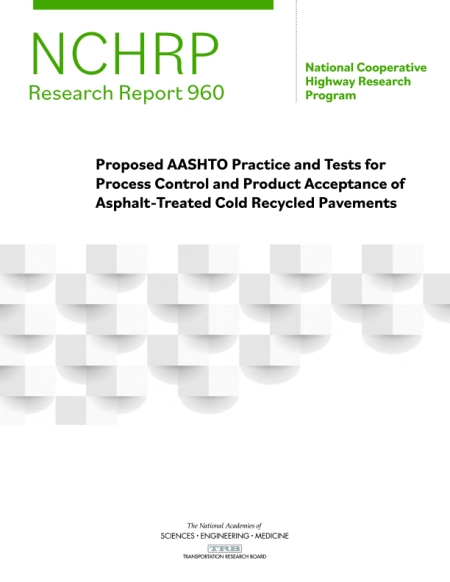 Pavement recycling is a technology that can restore the service life of pavement structures and stretch available funding for pavement rehabilitation. In general, pavement recycling techniques remix the existing pavement material and reuse it in the final pavement in the form of a stabilized layer.

Limitations to further widespread implementation of pavement recycling processes have been reported in previous national research efforts. The TRB National Cooperative Highway Research Program's NCHRP Research Report 960: Proposed AASHTO Practice and Tests for Process Control and Product Acceptance of Asphalt-Treated Cold Recycled Pavements investigates and recommends a series of tests that could be used for the purpose of implementing rapid quality tests that can be used to assess the time to opening to traffic and time to surfacing a newly constructed recycled layer.