Visit NAP.edu/10766 to get more information about this book, to buy it in print, or to download it as a free PDF.
Page i Share Cite
Suggested Citation:"FRONT MATTER." National Research Council. 1984. Toxicity Testing: Strategies to Determine Needs and Priorities. Washington, DC: The National Academies Press. doi: 10.17226/317.
×

PREFACE In September 1980, the National Toxicology Program (NTP), through the National Institute of Environmental Health Sciences, contracted with the National Research Council (NRC) and the National Academy of Sciences for study with two principal charges: (1) To characterize the toxicity-testing needs for substances to which there is known or anticipated human exposure' so that federal agencies responsible for the protection of public health will have the appropriate information needed to assess the toxicity of such substances. (2) To develop and validate uniformly applicable and w~de-ranging criteria by which to set priorities for research on substances with potentially adverse public-heath impact. me study, titled "Identification of Toxic and Potentially Toxic Chemicals for Consideration by the National Toxicology Program," was established in the Board on Toxicology and Environmental Health Hazards of the NRC's Commission on Life Sciences. A Steering Committee was formed to address the charges and coordinate the efforts of three operating committees. The Committee on Statistical Sampling Methods ("Committee on Sampling Strategies") and the Committee on Characterization of the Status of Toxicity Data Elements ("Committee on Toxicity Data Elements") addressed the first charge. The Committee on Research of Agents Potentially Hazardous to Human Health ("Committee on Priority Mechanisms") addressed the second charge. m e two charges of the study involved concepts with many similarities, but they also required different approaches. The first charge--to characterize the status of toxicity-testing information on substances--required a detailed examination of existing toxicity data based on available criteria for qualitative and quantitative characteristics of adequacy. The approach required judgments on the adequacy of testing of specific substances, independently of whether the substances were potent agents or relatively inert substances with low toxicity. The second charge--to develop criteria for setting research priorities--required a detailed examination of methods of selecting potentially toxic substances from a large universe of substances on which there was little or no toxicity information. The approach required judgments on the predictability of testing procedures, the nature and severity of potential toxic effects, and the systemic modeling of steps in decision-making. This is the final report of the four committees. It represents the work of their members, NRC staff, a large number of consultants, ano others who provided invaluable assistance to the committees. This report is designed to be a stand-alone document, summarizing and synthesizing 1X

the full scope of work first described at two interim stages of evolution in documents entitled Strategies to Determine Needs and Priorities for Toxicity Testing--Volume 1: Design and Volume 2: Development. These earlier reports were published at the end of the first and second years of the study. The activities to address the two charges were conducted with substantial interchange of concepts and practices, but they were recognized to be sufficiently different in approach to warrant presentation as two distinct parts. The specific differences are presented in a final appendix to Part 2. The reader should be aware of this intent when reading Parts 1 and 2 of this report. We of the Steering Committee thank all the participants, who have contributed so much to this study. The amount of work performed indicates the magnitude of the task that faces NTP. In particular, we wish to recognize the enormous effort dedicated to this study by the three operating committees and the NRC staff. The dossiers containing the analyses of all toxicity data that were available on a subsample of 100 substances constitute approximately 2 cubic meters of decision-making information. me collection, analysis, and interpretation of information on just this small number of substances in general use required thousands of hours of the time of volunteer committee members, the staff, and other participants over a 3-year period. The thoughtfulness and computer work needed to select the study samples and model the criteria for priority-setting required no less intensive an effort. The large scope of work addressed by the committees could not have been accomplished without the assistance of the skilled and dedicated staff of the Board on Toxicology and Environmental Health Hazards. We wish to thank Robert G. Tardiff, who was project director for this study during his tenure with the Board, and Alvin G. Lazen, who was associated with the study in its last stages. We also thank Scott R. Baker for his important contributions to the "needs" section of this report and Samuel B. McKee and Walter G. Rosen for their work on the "priorities" section; Lamar B. Dale, Leslye R. Giese, Ronnie M. Good, Norman Grossblatt, Cheryl J. Haily, Veronica C. Harris, Azora L. Irby, Barbara B. Jaffe, Paula H. Morris, Gordon W. Newell, Shirley A. Perry, Frances M. Peter, Jacqueline K. Prince, Resha M. Putzrath, Joyce A. Russell, Patricia A. Sterling, Robert J. Comas, and Michele W. Zinn for their professional and administrative contributions; and Andrew M. Pope, Gerald M. Rosen, and Jeannee K. Yermakoff for their contributions while they were serving as National Research Council Fellows. We are particularly grateful for the assistance provided by Raymond E. Shapiro, who served as the study's project officer for NTP. 1 James L. Whittenberyer' Chairman John C. Bailar John Doul1 Emil A. Pfitzer Arthur C. Upton x

Next: EXECUTIVE SUMMARY »
Toxicity Testing: Strategies to Determine Needs and Priorities Get This Book
× 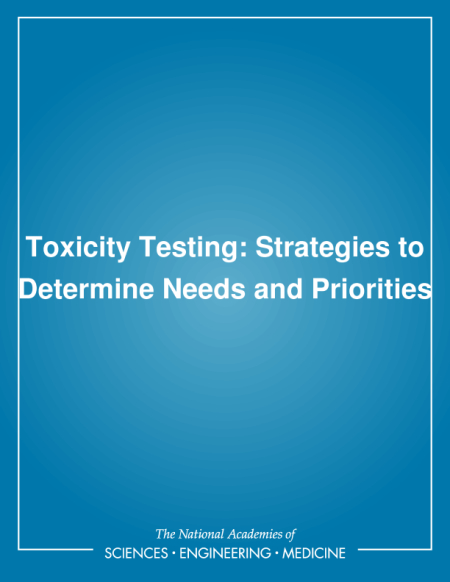 Prepared at the request of the National Toxicology Program, this landmark report reveals that many chemicals used in pesticides, cosmetics, drugs, food, and commerce have not been sufficiently tested to allow a complete determination of their potential hazards. Given the vast number of chemical substances to which humans are exposed, the authors use a model to show how research priorities for toxicity testing can be set.