Visit NAP.edu/10766 to get more information about this book, to buy it in print, or to download it as a free PDF.
Page i Share Cite
Suggested Citation:"Front Matter." National Research Council. 1995. Evolving the High Performance Computing and Communications Initiative to Support the Nation's Information Infrastructure. Washington, DC: The National Academies Press. doi: 10.17226/4948.
×

PREFACE vii Preface In early 1994, acting through the Defense Authorization Act for FY 1994 (Public Law 103160), Congress asked the National Research Council (NRC) to examine the status of the High-Performance Computing and Communications Initiative (HPCCI). Broad-based interest in and support for the HPCCI exist. Given its scope and size, concerns had been raised about its goals, management, and progress. Congress asked that at a minimum the study address: â¢ The basic underlying rationale(s) for the program, including the appropriate balance between federal efforts and private-sector efforts; â¢ The appropriateness of its goals and directions; â¢ The balance between various elements of the program; â¢ The effectiveness of the mechanisms for obtaining the views of industry and users for the planning and implementation of the program; â¢ The likelihood that the various goals of the program will be achieved; â¢ The management and coordination of the program; and â¢ The relationship of the program to other federal support of high-performance computing and communications, including acquisition of high-performance computers by federal departments and agencies in support of the mission needs of these departments and agencies. For this study the NRC's Computer Science and Telecommunications Board (CSTB) convened a committee of 12 members, expert on pioneering applications of computers and communications and the major components of the HPCCI: High-Performance Computing Systems, Advanced Software Technology and Algorithms, the National Research and Education Network, Basic Research and Human Resources, and Information Infrastructure Technology and Applications. Congress asked the committee to accelerate the normal NRC study process in order to provide an interim report by July 1, 1994, and a final report by February 1, 1995. The committee was able to meet this rapid turnaround by drawing on the knowledge and experience of its members as expressed in committee deliberations and by obtaining input from numerous outside experts. The full committee met six times between March 10, 1994, and December 20, 1994, to hear more than 25 high-performance computing and communications users, builders, and scientists; to discuss the HPCCI in detail; and to produce this report. Additionally, smaller groups of committee members made site visits to discuss first- hand the use of high-performance technologies. These visits involved another 6 individuals from the Ford Motor Company and approximately 50 high-performance computing and communications users who had gathered at a workshop to discuss the use of high-performance systems in environmental research and simulation. In addition to examining the current status of the program, the committee considered the evolution of the HPCCI

PREFACE viii and its goals and alternate government investment strategies related to technological development. The committee took into account varying perspectives on the initiative's goals and available assessments of progress toward achieving them. The committee's interim report provided technical background and perspective on the overall development of high-performance computing and communications systems, as well as on the HPCCI, formally started in 1991.1 The interim report made two recommendations: (1) strengthen the National Coordination Office to help it meet increasing future demands for program coordination and information functions; and (2) immediately appoint the congressionally mandated HPCCI Advisory Committee to provide broad-based, active input to the initiative. As this final report goes to press, both recommendations have yet to be acted on and thus require executive and legislative attention. This final report, Evolving the High-Performance Computing and Communications Initiative to Support the Nation's Information Infrastructure, purposely adopted a broad perspective so as to examine the HPCCI within the context of the evolving information infrastructure and national economic competitiveness generally. Committee deliberations consistently pointed out the important contributions that computing and communications research have made to the nation's economy, scientific research, national defense, and social fabric. That research has nourished U.S. leadership in information technology goods, services, and applications. Traditionally, the most powerful computers and the fastest networks made many of those contributions. Recently, however, the widespread availability of significant computing and communications capabilities on the nation's desktops and factory floors has also produced many benefits. The broadening and interconnection of more and more computer- based systems call attention to research needs associated with system scale as well as performance. The Committee to Study High Performance Computing and Communications: Status of a Major Initiative is grateful for the help, encouragement, and hard work of the NRC staff working with us: Marjory Blumenthal, Jim Mallory, Susan Maurizi, and Leslie Wade. Our meetings went smoothly because of their careful preparation. This report came together because of their attention and diligence. They patiently assembled sometimes conflicting text from diverse authors and helped reconcile it with the critique of our reviewers. They searched out facts of importance to our deliberations. Their excellent staff preparation helped us focus on the substance of our task. Many others also made valuable contributions to the committee. In addition to individuals listed in Appendix F who briefed the committee, the committee appreciates inputs from Sally Howe and Don Austin (National Coordination Office); Bob Borchers, Paul Young, Dick Kaplan, and Robert Voight (National Science Foundation); Eric Cooper (FORE Systems); Stephen Squires (Advanced Research Projects Agency); Sandy MacDonald (National Oceanic and Atmospheric Administration); Robert Bonometti (Office of Science and Technology Policy); and Al Rosenheck (former congressional staffer). It is also grateful to the anonymous reviewers who helped to sharpen and focus the report with their insightful comments. Responsibility for the report, of course, remains with the committee. 1 Computer Science and Telecommunications Board (CSTB), National Research Council. 1994. Interim Report on the Status of the High-Performance Computing and Communications Initiative. Computer Science and Telecommunications Board, Washington, D.C.

PREFACE ix Finally, we want to acknowledge the contributions to our present task of research projects 30 years past. Of course this text was all word processed. Of course the charts were drafted on computers. Of course we used Internet communication nationwide to plan our meetings, share our thoughts, reconcile our differences, and assemble our report. We plugged our portable computers into a local network at each of our meetings, sending drafts to local laser printers. In short, we have partaken fully of the fruits of the HPCCI's precursors. We thank the visionaries of the past for our tools. Frederick P. Brooks Ivan E. Sutherland Co-chairs Committee to Study High Performance Computing and Communications: Status of a Major Initiative

PREFACE xiii Industry, if left to itself, will naturally find its way to the most useful and profitable employment. Whence it is inferred that manufacturers, without the aid of government, will grow up as soon and as fast as the natural state of things and the interest of the community may require. Against the solidity of this hypothesis . . . very cogent reasons may be offered . . . [including] the strong influence of habit; the spirit of imitation; the fear of want of success in untried enterprises; the intrinsic difficulties incident to first essays towards [competition with established foreign players]: the bounties, premiums, and other artificial encouragements with which foreign nations second the exertions of their own citizens ... To produce the desirable changes as early as may be expedient may therefore require the incitement and patronage of government. âAlexander Hamilton, 1791, Report on Manufactures

Next: Executive Summary »
Evolving the High Performance Computing and Communications Initiative to Support the Nation's Information Infrastructure Get This Book
× 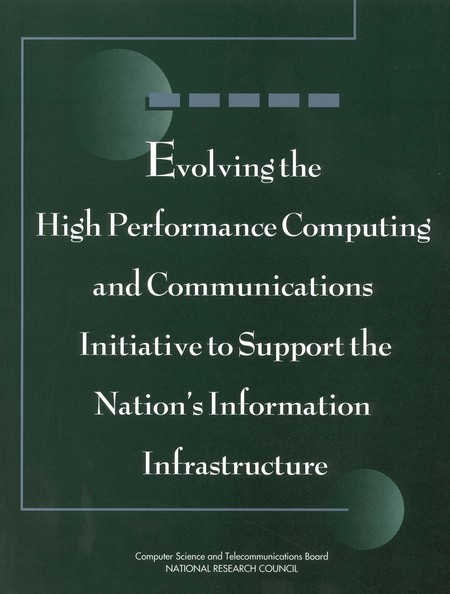 Maintaining the United States' strong lead in information technology will require continued federal support of research in this area, most of which is currently funded under the High Performance Computing and Communications Initiative (HPCCI). The Initiative has already accomplished a great deal and should be continued. This book provides 13 major recommendations for refining both HPCCI and support of information technology research in general. It also provides a good overview of the development of HPCC technologies.