Get This Book
Visit NAP.edu/10766 to get more information about this book, to buy it in print, or to download it as a free PDF.
Page i Share Cite
Suggested Citation:"FRONT MATTER." Institute of Medicine. 1997. The Hidden Epidemic: Confronting Sexually Transmitted Diseases. Washington, DC: The National Academies Press. doi: 10.17226/5284.
×

Committee on Prevention and Control of Sexually Transmitted Diseases

The Institute of Medicine was chartered in 1970 by the National Academy of Sciences to enlist distinguished members of the appropriate professions in the examination of policy matters pertaining to the health of the public. In this, the Institute acts under both the Academy's 1863 congressional charter responsibility to be an adviser to the federal government and its own initiative in identifying issues of medical care, research, and education. Dr. Kenneth I. Shine is president of the Institute of Medicine.

Funding for this project was provided by Centers for Disease Control and Prevention, Glaxo Wellcome, Inc., The Henry J. Kaiser Family Foundation, National Institute of Allergy and Infectious Diseases, NIH Office of Research on Women's Health, Ortho-McNeil Pharmaceutical, and SmithKline Beecham Pharmaceuticals. Any opinions, findings, conclusions, or recommendations expressed in this publication are those of the author(s) and do not necessarily reflect the view of the organization or agencies that provide support for the project.

Institute of Medicine (U.S.). Committee on Prevention and Control of Sexually Transmitted Diseases.

DNLM/DLC for Library of Congress

The serpent has been a symbol of long life, healing, and knowledge among almost all cultures and religions since the beginning of recorded history. The image adopted as a logotype by the Institute of Medicine is based on a relief carving from ancient Greece, now held by the Staalichemuseen in Berlin.

Committee on Prevention and Control of Sexually Transmitted Diseases

Center for AIDS and STD, and

A. Eugene Washington, Professor and Chair,

This report focuses on the hidden epidemic of sexually transmitted diseases (STDs) in the United States: the reasons why it has not been controlled, and what we, as a nation, need to do differently to confront this problem. The main objective of this report is to educate health professionals, policymakers, and the public regarding the truths and consequences of STDs in the United States. This report is also a call for a bold national effort to prevent these diseases.

Through this report, we hope to improve awareness and knowledge regarding the scope and impact of STDs and demonstrate why all Americans should be concerned about these diseases. At a minimum, we hope to ignite open discussion in both private and public arenas regarding STDs and their prevention. We believe that encouraging open discussion around STD prevention will eventually lead to greater understanding, closer cooperation, improved STD-related services, and lower rates of STDs in the United States.

Of particular note, the following individuals directly contributed to the report by drafting commissioned papers in their areas of expertise. A review paper on the relationship between substance use and STDs by John Beltrami, Linda Wright-DeAguero, Mindy Thompson Fullilove, and Brian Edlin was critical to

the report, and sections of their paper were replicated in the discussion of substance use and STDs. A paper by Jeffrey Kelly provided important background for the drafting of sections regarding behavioral interventions in STD prevention. Marie-Claude Boily's important work on modeling the impact of STDs on HIV transmission is included as an appendix. In addition, Joanna Siegel's major review of the economic costs of STDs was the primary basis for the committee's cost estimates and is also included in the appendix of the report.

The following agencies and organizations and key staff generously provided funding and generated support within their institutions for this study: the Centers for Disease Control and Prevention (Jim Curran [now with Emory University], Helene Gayle, Jack Spencer, and Judy Wasserheit), Glaxo Wellcome, Inc. (Gray Davis), the Henry J. Kaiser Family Foundation (Suzanne Delbanco and Mark Smith), the National Institute of Allergy and Infectious Diseases of the National Institutes of Health (NIH) (Penny Hitchcock), the Office of Research on Women's Health of NIH (Vivian Pinn and Anne Bavier), Ortho-McNeil Pharmaceutical (James Kahn), and SmithKline Beecham Pharmaceuticals (Vincent Ahonkai, Paul Blake, and Geoff Nichol). Their willingness to sponsor a study on the prevention and control of sexually transmitted diseases is no small commitment, given the sensitive and controversial nature of this public health issue. Their encouragement and support are gratefully acknowledged.

Next: EXECUTIVE SUMMARY »
The Hidden Epidemic: Confronting Sexually Transmitted Diseases Get This Book
× 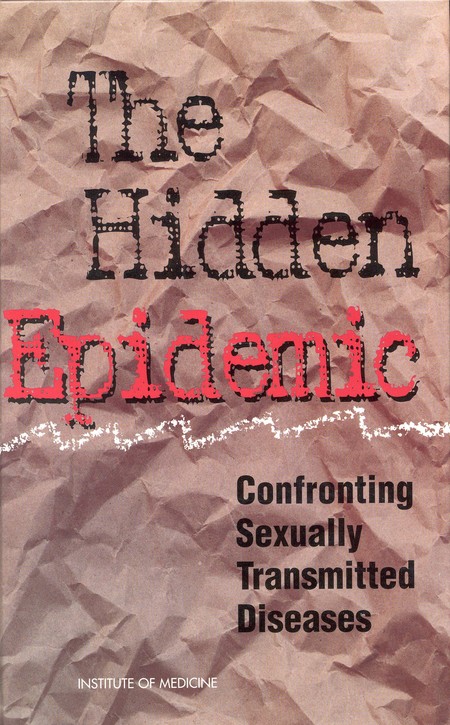 The United States has the dubious distinction of leading the industrialized world in overall rates of sexually transmitted diseases (STDs), with 12 million new cases annually. About 3 million teenagers contract an STD each year, and many will have long-term health problems as a result. Women and adolescents are particularly vulnerable to these diseases and their health consequences. In addition, STDs increase the risk of HIV transmission.

The Hidden Epidemic examines the scope of sexually transmitted infections in the United States and provides a critical assessment of the nation's response to this public health crisis. The book identifies the components of an effective national STD prevention and control strategy and provides direction for an appropriate response to the epidemic. Recommendations for improving public awareness and education, reaching women and adolescents, integrating public health programs, training health care professionals, modifying messages from the mass media, and supporting future research are included.

The book documents the epidemiological dimensions and the economic and social costs of STDs, describing them as "a secret epidemic" with tremendous consequences. The committee frankly discusses the confusing and often hypocritical nature of how Americans deal with issues regarding sexuality—the conflicting messages conveyed in the mass media, the reluctance to promote condom use, the controversy over sex education for teenagers, and the issue of personal blame.

The Hidden Epidemic identifies key elements of effective, culturally appropriate programs to promote healthy behavior by adolescents and adults. It examines the problem of fragmentation in STD services and provides examples of communities that have formed partnerships between stakeholders to develop integrated approaches.

The committee's recommendations provide a practical foundation on which to build an integrated national program to help young people and adults develop habits of healthy sexuality.

The Hidden Epidemic was written for both health care professionals and people without a medical background and will be indispensable to anyone concerned about preventing and controlling STDs.